What is Grandmont Rosedale SOUP? 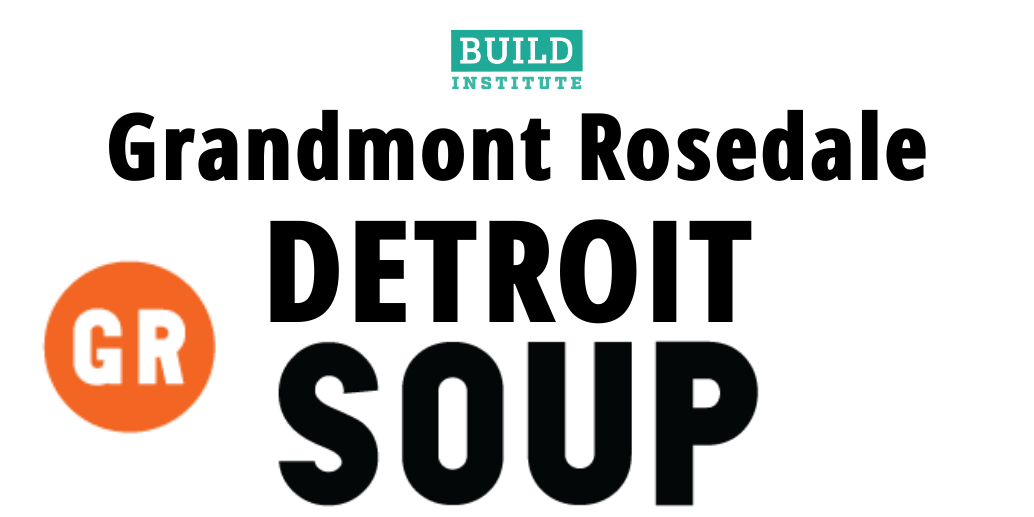 Grandmont Rosedale SOUP is an in-person crowdfunding dinner meant to promote a great idea that benefits the Grandmont Rosedale community. It’s a fairly simply idea, but it can have wonderfully widespread impact. At the welcome table, attendees drop $10 (a suggested donation) into a soup pot and in exchange they get soup, salad, bread, dessert, and a vote. While the attendees are eating, they hear four pitches from four individuals, groups, neighborhood associations, small businesses, really any entity that has a great idea for making Grandmont Rosedale even better. Once they hear the pitch, the diners vote. The pitch that gets the most votes wins the pot of money to support their idea. Simple.

The really great part about a SOUP is the community that is created around these events. Volunteer neighbors sit on the committee to gather cooks, a venue, a musician, figure out how many bowls and cups we’ll need – you know, party planning kind of stuff. Neighbor volunteers bring out their favorite soup recipes, maybe they’ll ask a favorite local small business for drink or dessert donations. Anyone hoping to pitch at the SOUP will first submit a proposal to pitch. The committee will also review the proposals to pitch and choose six (two are alternates) to pitch the night of the SOUP.

Even if a pitch does not win, that great community idea has just been heard by many people in the community, and who knows? Maybe someone will find the one who pitched but didn’t win and offer to help, or maybe an attendee will find a new recipe, a new friend, a new reason to get involved in the neighborhood. That’s the beauty of SOUP: no two are the same, and they are organized by and for the community.

There are SOUPs in many neighborhoods throughout Detroit. There is also a City-Wide SOUP. Anyone is welcome to attend any SOUP. It’s a great way to visit some places around the city that are not on any tourist list: the Jam Handy Building, numerous church basements, and unfinished spaces. Grandmont Rosedale Development Corporation has hosted several SOUPs – outside at the Northwest Detroit Farmers’ Market, at Grand River WorkPlace before it was renovated, at Grand River WorkPlace after it was renovated, a few local church basements, and the alley behind what is now Rosa, the coffee shop at 19180 Grand River.

In more recent years, Build Institute, an organization that supports Detroit entrepreneurs, has taken on offering support for SOUP events. Build creates the flyers, provides a budget, and offers the platform to accept proposals to pitch. They also offer a lot of great guidance for hosting a SOUP.

If you are currently without an idea for making Grandmont Rosedale even better, come to the Grandmont Rosedale SOUP on Friday, July 29 at Cutz Lounge, 19655 Grand River. The doors are at 6, pitches at 6:30, dinner at 7, and the winner is announced at 7:30. It’s fun, close by, and chances are good you’ll know a lot of people there. If you do have a great idea for Grandmont Rosedale, let us know! Submit your proposal idea by Saturday, July 9 to https://detroitsoup.buildinstitute.org/submit-grandmont-rosedale/

To learn even more about SOUP: https://www.buildinstitute.org/programs/soup/ 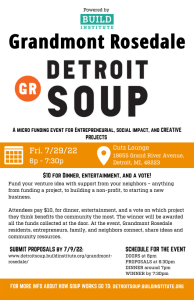