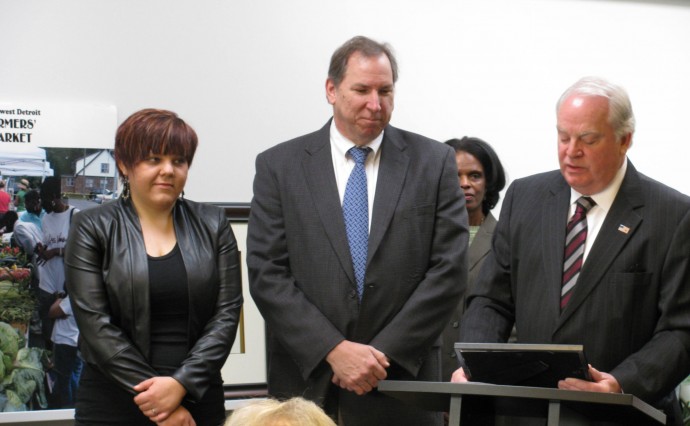 On Tuesday, Nov. 18, Bernard J. Youngblood, the Wayne County Registrar of Deeds and several representatives from city and county government arrived at the GRDC offices a few minutes before 10.  Channel 4 was there too, ready to document the honoring of GRDC’s Vacant Property Task Force volunteers for their persistence in bringing a fraudulent homeowner who had stolen 24 houses in northwest Detroit to justice.  Youngblood was clearly impressed with the work of the VPTF volunteers:  “This task force was so diligent in protecting their neighborhood – they took copious notes, kept records of license plate numbers, makes of cars, times the fraudulent homeowner came and went – this criminal plead guilty to stealing 24 homes.  It’s tremendous!”  Registrar Youngblood presented GRDC Executive Director Tom Goddeeris and Sustainable Communities Manager Becki Kenderes with a certificate as a tribute to the leadership of GRDC and the attentiveness of the VPTF volunteers.

Wayne County Commissioners Alisha Bell and Burton Leland echoed Youngblood’s enthusiasm for the determination of the task force.  Commissioner Bell thanked the “Detroit Police Department, the sheriff, Registrar Youngblood, and especially the neighbors and residents who made this all possible.”  Commissioner Leland also thanked GRDC for “bringing all the stakeholders together to get the job done.”

In the audience were many of the VPTF volunteers who did the hard, often daily work it took over several months to gather the data and evidence needed to elicit a guilty plea.  It was a great victory for the volunteers of the VPTF, GRDC, and the entire community of Grandmont Rosedale.  As Registrar Youngblood said, in Grandmont Rosedale there is a “source of pride of ownership.  This task force should be a model for the rest of Detroit.  Share what you have done and let other communities come and see.  More good things are to come in the city of Detroit!”