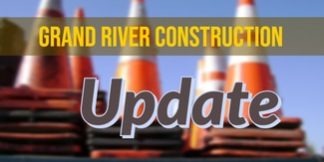 If you live, work, or drive through Grandmont Rosedale, you know that there’s a lot of construction happening on Grand River. Just what those changes are can get a bit confusing though, and even cause some concern. The Grand River Streetscape Project is quite an undertaking with many different changes coming to the commercial corridor, so we thought we’d explain some of the Whys and Hows and Whens of this project.

After several months of community meetings hosted by MDOT, GRDC, and the City of Detroit, Grandmont Rosedale residents and business owners made it clear that they wanted a slower, safer Grand River for pedestrians, bide riders, bus riders, and drivers. The urban planning phrase that is used to express this desire for slower, safer streets is “traffic calming.” Often when drivers exit the Southfield Freeway, they round the corner onto Grand River and continue at some pretty high speeds making driving, walking, biking and bus riding dangerous. High speed traffic also diminishes the possibility for our businesses to attract “foot traffic” patrons. It’s also near impossible to notice a new restaurant or a lovely gardening store when one is flying past at high speeds.

In order to “calm traffic,” changes are made to the street, crosswalks, bus stops, and sidewalks. As anyone who has seen the construction activity on Grand River can attest, this is quite a big project, and so to avoid more upheaval, the city deemed this a good time to also upgrade the water mains/sewer systems on both sides of Grand River.

THERE WILL BE NO MEDIANS ON GRAND RIVER

There will be one, two-way protected bike lane on the north side of Grand River only. After a great deal of research, it has been determined that the safest bike lanes are those that are between the curb and parked cars and/or bump outs. Getting bike riders off the sidewalks and onto the Grand River bike lane will make their travel much safer, sidewalk pedestrians safer, and may encourage others to bike instead of drive, especially if they are just going a mile or two. The idea is to make Grand River safer for drivers, bus riders, bikers and pedestrians.

The Grand River Streetscape Project runs from the M-39/Southfield Freeway Service Drive to Berg Road. The entire street will be resurfaced and the sidewalks will be repaired. The projected finish date for these changes, or phase one of the project from the Southfield Freeway to Evergreen is the end of November, 2019. Phase two, or the beautification of this area will include landscaping, benches, and trees will begin in the spring of 2020. The work on Grand River from Evergreen to Berg road will begin next year, 2020.

There will be better visibility for everyone – drivers, pedestrians, bike riders, and bus riders. Greater visibility and a safer Grand River makes for a more pleasant drive, walk, or ride. It will give drivers a better chance to see our many wonderful businesses, and to see how we care for and about our home.

All of these changes are the result of Grandmont Rosedale residents’ and business owners’ requests. There have been several public meetings for over a year to get feedback and to provide updates about the project. Project updates will be provided at the next meeting of the ongoing series of Open Community Office Hours sponsored by MDOT, the City of Detroit, Major Cement, and the Detroit Economic Growth Corporation on Tuesday, Nov. 19 from 10:30 – 11:30 am at the GRDC Offices, 19800 Grand River. There will be a Community Meeting for a new project, the Grand Parklet to be located at Grand River and Puritan, on Tuesday, Dec. 3 from 6 – 7:30 pm at the GRDC Offices, 19800 Grand River. Come to the meeting with your questions, concerns, and input about the design options for the park.

The progress of the Grand River Streetscape Project is frequently updated on the city of Detroit website: detroitmi.gov/streetscapes