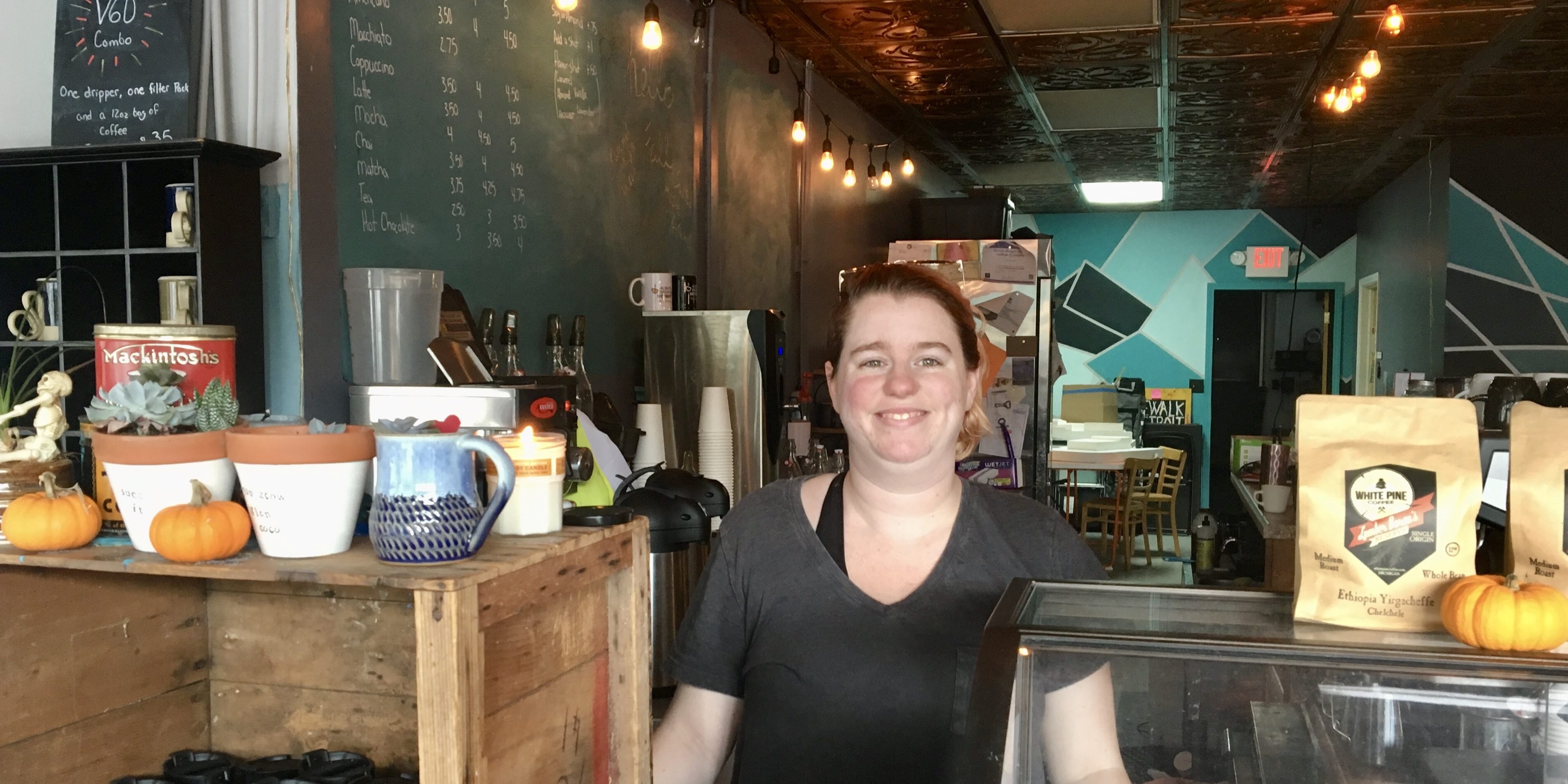 Town Hall Caffé owner Lindsey Marr did not get into the coffee shop business because she thought it would be easy. She didn’t open her doors because she thought it would be simple. She became owner of the Town Hall Caffé, 19180 Grand River, on January 1, 2019 because she wanted to be a part of the Grandmont Rosedale community, and she thought living here wasn’t quite enough. Like many tales of derring-do, Lindsey’s started with taking a chance, falling in love, leaving home, and then falling in love again – this time with Detroit and Grandmont Rosedale.

Lindsey was in college in Boston, pursuing a degree in Fine Arts when her grandmother became quite ill. Her grandmother was Lindsey’s “biggest cheerleader,” and so Lindsey went back home to her small home town in New Jersey to look after and to simply “be with her” for her last few months. Lindsey stayed a year after her grandmother passed, but felt a bit stuck and so went back to Boston where she joined the thriving parkour community. According to dictionary.com, parkour is “the activity or sport of moving rapidly through an area, typically in an urban environment, negotiating obstacles by running, jumping, and climbing.” Lindsey participated in parkour, but what she really liked was the community aspect of the sport. A friend had the idea to open a parkour gym and Lindsey agreed that it was a great idea and so bought into the business becoming the accountant and legal specialist. While living in Boston Lindsey also did inventory and managed a boutique. Lindsey small business experience began with learning the backend or office aspects of owning a small business.

Just as Lindsey understands many of the ins and outs of small business, she also understands the importance of volunteerism. In 2016 she volunteered at “Honk” – a Boston festival for brass musicians. There was a young saxophone player from Southfield, Michigan named Taylor who was performing at the festival, and with whom Lindsey hit it off at an after-party. According to Lindsey, she “literally tripped over a fence and fell” into Taylor, which is definitely one way to start a conversation. After the two chatted for hours, he went on to his next gig in Pittsburgh and Lindsey reluctantly went back home. He called and asked her if she might be interested in going to Theatre Bizarre in Detroit. Halloween is Lindsey’s favorite holiday – “I love it when there’s an epic party and everyone is in costume, when it’s over the top.” It was the perfect date. Lindsey fell in love a second time that night. Theatre Bizarre was everything Lindsey loved about Halloween: elaborate costumes, music, performances, everyone participating in all of the spectacle. “I fell in love with Detroit that night,” she remembers. Lindsey started coming to Detroit for her two loves every few weeks, and then every other weekend.

After Lindsey and Taylor celebrated their six month anniversary with a trip to Italy, Lindsey realized, “This is my person.” Lindsey decided to move to Detroit. The next question was which neighborhood. Taylor knew about Grandmont Rosedale. He was familiar with the homes, the tree-lined streets, the community, and so he took Lindsey on a drive through the neighborhoods. It didn’t take much convincing. By the time they were looking at a third home for sale, Lindsey knew. “This is home.” They bought a home in Grandmont Rosedale and Lindsey started to work wherever she could. She had a series of odd jobs, one of them working at the coffee shop in her neighborhood, called Always Brewing Detroit at the time. Lindsey knew that one selling feature of a neighborhood is the ability to get a great cup of coffee, and that’s what the coffee shop had. It also had a steady stream of residents and local business owners who appreciated what Lindsey appreciated – a place with a great cup of coffee and space to work, meet, or just relax. Lindsey started including the coffee shop in her morning routine, and as she did back in Boston, she found a way to become more involved. The Artists’ Second Sale was particularly interesting to Lindsey so she volunteered to find artists to participate and to set up the event. She was also a vendor, selling her photos. Lindsey soon discovered that the owner of the coffee shop, Cody, was thinking of selling. She was still working for the parkour gym on accounting and budgeting, but had significantly decreased her work load since moving to Detroit. She talked with Taylor and took the plunge. In late 2018 Lindsey let Cody know that she was interested in buying the shop. Together they renamed it the Town Hall Caffé, and on January 1, 2019 Lindsey became the owner.

Over the next several months, Lindsey got to know many of the regulars who came into the shop. Coming from a small town, “where everyone knew everyone,” Lindsey looking to create that feeling of community in her new home. The coffee shop was the perfect place for her to create that again. “Town Hall Caffé was my way to get involved. It was my new family in this neighborhood. The people care.” The coffee shop is indeed a hub in our community. There is knitting on Thursdays for all levels, GRDC’s Vacant Property Task Force meets there monthly, the Fun Litter Pick-up Club meets there monthly too, and if you’ve ever been to the coffee shop on a Tuesday morning, you’ll see a group of old friends sharing stories, strategies, and bragging about their grandchildren. The Town Hall Caffé participated in the Eats, Treats and Sweet Sales on Grand River event and will feature several vendors on Shop small in GRANDmont Rosedale Small Business Saturday© event on Nov. 30.

In spite of her small business experience, and participating in several Grandmont Rosedale Commercial Corridor events, though, Lindsey knows well that owning a small business is not easy. While the construction on Grand River bodes well for future pedestrians, drivers, bike, and bus riders, weathering the parking and walking challenges that construction brings has been “real rough” for the Town Hall Caffé. Lindsey has cut back where she can, but would be happiest to see a steady stream of people coming in to drink coffee or tea and maybe to treat themselves to a muffin. Lindsey is planning a game night, has scheduled an Artists’ Seconds Sale in February, and is open to others’ ideas too. Got a euchre game that could use a new venue? How about holding your book club at the coffee shop? Maybe invite your neighbor out for a cup of coffee and conversation?

Grandmont Rosedale is widely known to be a neighborhood of dedicated activists who work hard and for the long haul to create a community that supports all of its members, business owners included.

To learn about coming events at Town Hall Caffé, you can like the shop on Facebook or send an email to townhallcaffe@gmail.com.