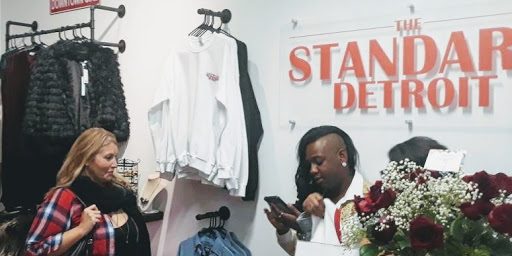 Robert Hurse’s clothing store, The Standard Detroit, had its grand opening soirée at the Grand River WorkPlace on November 9th. Robert’s curated vision of Detroit style is now available on Grand River through WorkPlace’s pop-up retail space. In his store, you will find clothing that projects a hard-working, hard-playing, and outgoing image for “women who are out here getting things done.” Accordingly, The Standard Detroit welcomes both fashionistas and the fashion-challenged in search of new looks. To those in the latter category, Robert assures “we will get you together!”

Reminiscent of Gil Scott-Heron’s 1977 classic, “We Almost Lost Detroit,” Detroit nearly lost Robert to the New York fashion scene. After attending Teen Vogue University (a program that introduces students to the fashion world), Robert’s portfolio began to catch the eyes of professionals in NYC, including Teen Vogue’s Editor & Chief. But once he began actively seeking work there, his Detroit sensibilities were met with mixed reception: “I only did a couple of jobs out there,” he recalls. “This was before Detroit was ‘cool’ so they were like, ‘Who are you? Where did you say you’re from?’”

Through perseverance and dedication, Robert returned to Detroit, earned a degree (an Associate’s in Business Management from Washtenaw Community College), started a business, and won a Space Award from Motor City Match. He also took part in Grandmont Rosedale’s 2018 Small Business Saturday as a vendor, which turned out to be a great success for The Standard Detroit. People seemed to have very positive responses to Robert’s clothes, which led him to do more research into the Grandmont Rosedale community. It wasn’t long before Robert’s coat was pulled to the Grand River WorkPlace’s pop-up retail space—an opportunity he couldn’t pass up, given that he had always planned to move his business into a physical store.

Robert wants his store to offer a platform to designers from Detroit. To that end, The Standard Detroit will feature “Capsule Collections” that showcase the work of aspiring Detroit designers. Robert’s experiences as a Detroiter in the New York fashion industry are the motivation behind these collaborative ventures: “People love to bring in local artists, but there’s nothing the artists get out of it…. Many of them end up leaving Detroit thinking, ‘There’s nothing here for me.’ At The Standard, we truly support local artists.”  He’s already picked two artists to include in these special collections: Naye Taye Visuals, who works with recycled materials and specializes in handmade adornments, and Noir Hart, a jewelry and clothing designer. Both will be featured for the entirety of The Standard’s six-month placement in the pop-up space.

Robert observes that things are changing in Detroit—culturally, demographically, economically, and more. But these sweeping changes have specific implications in the business and language of style, as people make more daring and ambitious choices in how they represent themselves. “As Detroit becomes more diverse, you see that reflected in their style… but Detroiters were never defined by what fashion is—we do our own thing.” This diversity can be seen in Robert’s polychromatic style palette and the models he employs. One of these models is his sister, Willibea, a Medical Billing major who walked the Neiman Marcus 2019 Fash Bash at the Detroit Institute of Art. Their partnership distinguishes The Standard Detroit as something of a burgeoning family business.

The Standard Detroit’s hours are 12pm-7pm Wednesday through Sunday at 19120 Grand River. As we look forward to the November 30th “Shop small in GRANDmont Rosedale!” festivities, don’t forget to stop by Robert’s store. He promises mimosas and a shopping experience you won’t forget!