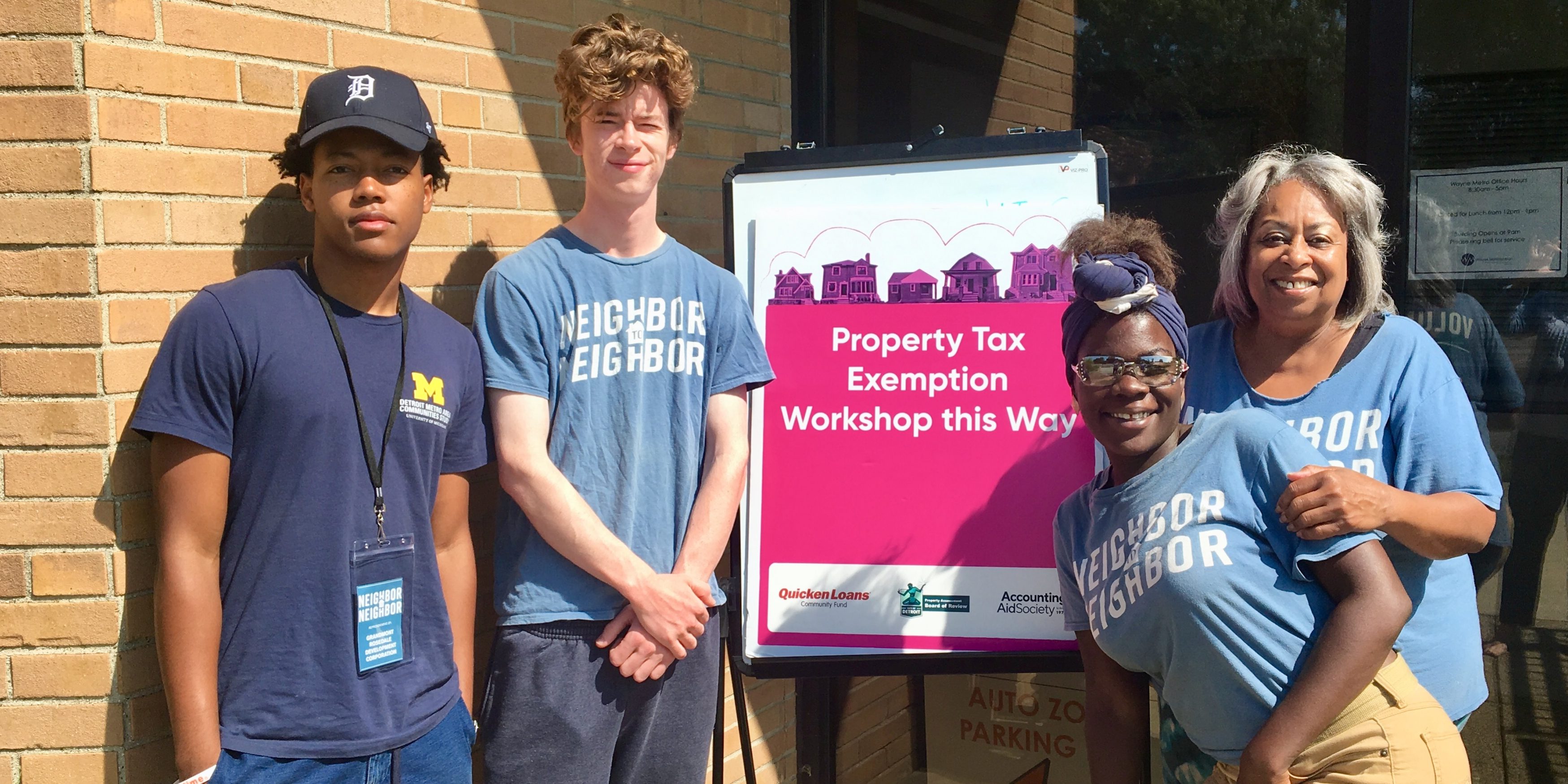 Years ago, Deborah LaViolette’s family was grateful for the Property Tax Exemption Program as it enabled her mother to remain in her home. This past summer, Deborah (on the far right in the photo), was a member of a Neighbor to Neighbor team that went door to door in several communities in and near Grandmont Rosedale, to tell identified residents about the Property Tax Exemption Program that could prevent them from losing their homes to foreclosure. Funded by the Quicken Loans Community Fund and supported by United Community Housing Coalition (UCHC), GRDC, and other Community Development Corporations throughout the city, Neighbor to Neighbor canvassers received training and in 24 teams of two leaving from GRDC, the teams covered neighborhoods from Schafer to Telegraph, from 96 to Puritan. Several of the canvassers that worked out of GRDC were Grandmont Rosedale residents, and, according to ending stats, they “began with 6,827 properties in tax delinquency, 5,124 of which were occupied.” From May to mid-August the teams “visited every home, and revisited 1,775 homes, totaling 8,602 visits.”

It was a hot summer, but this didn’t deter Deborah. “It’s all about my community,” she says. “It about keeping it together. It’s about connecting people to resources.” For over a year, every second Wednesday of the month from 10 am – 3 pm there has been a Property Tax Exemption Application (PTE) Workshop at the GRDC offices, 19800 Grand River, to help residents who are in danger of losing their home because of delinquent property taxes determine if they qualify for a property tax exemption, and to help them complete an application for the exemption. Since the Neighbor to Neighbor program, the number of people who attend the PTE Workshops has tripled. The door-to-door canvassing has made an important difference in the often difficult effort to keep people in their homes. According to Deborah, some residents were not aware that they were in danger of foreclosure, and some neighbors were reluctant to engage with the canvassers. “Some were skeptical, they thought we were selling something, so we told them ‘We’re here to help, not sell.’ Their defenses dropped. Many people were surprised that such a program existed. Some didn’t know they were in danger of losing their home.” Several times, Deborah and her teammates spent additional time with the residents, offering information about home repair funding available through UCHC, and at one home, Deborah noticed that the homeowner struggled to read the brochure regarding the PTE Workshop. He asked Deborah to advocate on his behalf, to call regarding his home. While the call came too late to prevent foreclosure, Deborah was able to ask for an extension on the homeowner’s behalf. “I’m hopeful,” Deborah says. “We both are.” For Deborah, the work has been not just rewarding, but enjoyable: “I enjoy talking with neighbors. And when I see them at GRDC at the workshop, I recognize them and they recognize me. They said they were coming and they did. That’s awesome.” They were at GRDC filling out the paperwork that might just save them their home.

These 24 Neighbor to Neighbor teams were coordinated by GRDC’s Community Engagement Manager Kitty Yarbrough, who is also one of the people who assists at the PTE Workshops. Several other Community Development Corporations in the city also sent out Neighbor to Neighbor teams to reach residents in danger of foreclosure. The territory that GRDC’s teams were asked to cover was one of the largest areas. All told, the city-wide teams canvassed over 60,000 homes, sometimes visiting a home more than once to be sure the homeowner received the information about the possibility of a Property Tax Exemption. 55% of these homeowners who believed they qualified for the exemption had never heard of the exemption before a Neighbor to Neighbor canvasser stopped by. The PTE Workshops have been happening at GRDC every second Wednesday of the month for over a year, but since the Neighbor to Neighbor campaign, Kitty noticed that the number of people who come to the Workshop “has tripled.” The Quicken Loan Community Fund has also noticed the effect of this effort: “Over the last three months, you and your teams have accomplished an incredible amount of work, and Neighbor to Neighbor results have been even better than what we saw last year.”

For Deborah, going door to door is “very familiar. I’ve always been an activist in one way or another.” Deborah was one of the teams of people who helped map Grandmont Rosedale to help address blight, learn about population density, and to help identify those areas with the greatest number of people who were in danger of losing their home. Deborah has also gone door to door for political campaigns, and as a Block Club Captain, the vice president of the Rosedale Park Radio Patrol, the vice-chair of Rosedale Park’s annual gala, and is active with GRDC’s Crime Prevention Task Force, Deborah is familiar with many front porches in her own neighborhood.

Believe it or not, this is what Deborah calls retirement. Deborah does, however, balance her community activism with attendance at many cultural events – the DIA and the DSO being her two favorite hangouts. In fact, Deborah went to events at Orchestra Hall and the Max M. Fisher so often, they asked her if she’d be interested in being a Donor Lounge Associate. This year will be her fourth season with the DSO. During the summer the DSO is pretty quiet, so the Neighbor to Neighbor Program was “just in time.” Deborah’s visit to many people’s homes this summer was indeed right on time. “To lose a home because of taxes is horrible,” Deborah says. To have a friendly face at your door showing you that there may be a path to keeping your home is wonderful.

The PTE Workshops take place every second Wednesday of the month from 10 am – 3 pm at the GRDC offices, 19800 Grand River. These workshops will run through the end of December, 2019. For more info, contact Kitty Yarbrough at 313.387.4732, ext. 103 or kyarbrough@grandmontrosedale.com. 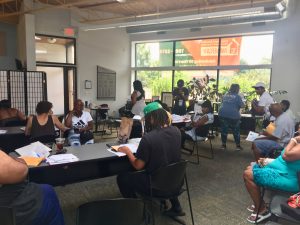