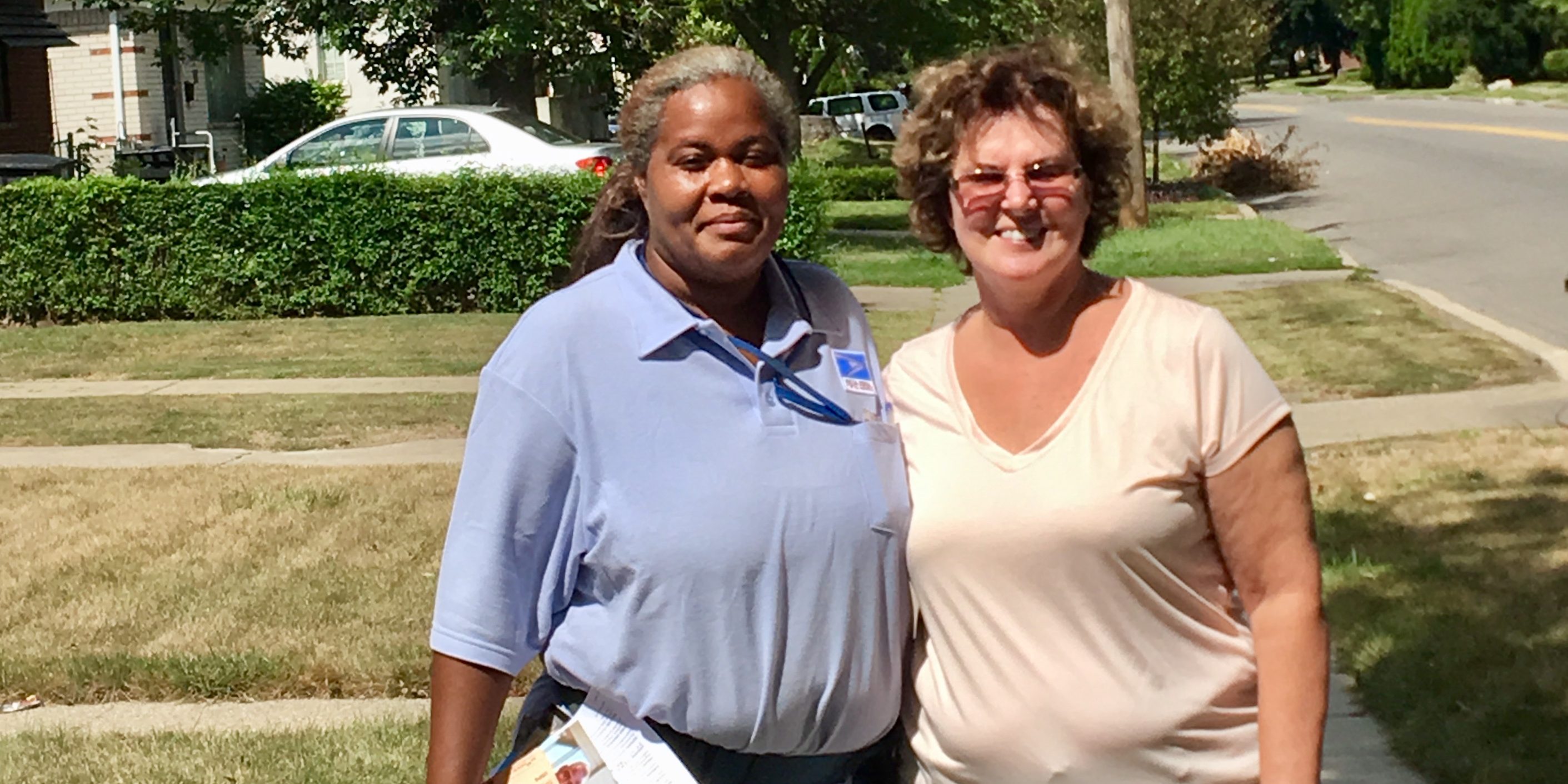 For eight years Nakita Thurmond-Simpson has delivered mail in Minock Park. Before coming to Minock Park, Nakita carried mail for nine years, most weeks adding some subbing time to her regular route. Nakita subbed in Minock Park for six months and got to know the community. She knew that if the area ever came up for a bid, Minock Park was where she wanted to be. “It’s not the easiest route. There are lots of steps, but it’s a nice area with pleasant people.” In her eight years delivering mail in Minock Park, Nakita is as much a part of the community as the residents. In fact, Nakita sees herself as part of the community, and has developed friendships with many residents, just like a good neighbor would.

GRDC board member and long-time Minock Park resident Vicki Holmes is on Nakita’s route. One February several years ago, Nakita saw Vicki “trying to fall” on her way from her car to her porch in a pair of shoes that was clearly not made to negotiate ice and snow. Nakita didn’t hesitate to offer Vicki an arm. “My boots are made for the snow,” Nakita says.

Vicki is hardly the only one on her route that Nakita knows or has helped out. Often what people are looking for is some of Nakita’s time. Because Nakita is a very consistent carrier, stopping at the same house at the same time every day, many neighbors know when she’s coming and make sure they are at the door when she comes by. “Mail Lady, I just got to tell you one thing,” could mean 15 minutes. “I try to listen to everyone,” but soon enough Nakita gets on her way again. Some neighbors walk with her a bit, some even drive along with her chatting as Nakita works. “I kind of see myself as a full-time mail carrier and a part-time therapist, “she says. “If you got a minute, they got a story.” Nakita knows everyone by name, and they know they can set a clock by Nakita, and that they can expect kindness and at the very least a willingness to listen. “When you’re nice to people they remember, just like me.” Nakita is proud that she knows the people on her route so well. She’s also proud to represent the post office well. “I make sure that everybody gets what they’re supposed to get. People look for the mail. They are expecting letters and packages. I don’t want the post office to look bad.”

Before Nakita carried mail she drove a truck in the military. After graduating high school, Nakita joined the military to drive a truck in honor of her brother. Nakita’s brother died when he was just 14 and Nakita was 13. He had “always wanted to be a truck driver, so that’s what I chose.” After she was released from the military, Nakita drove for Guardian, in the armored car division. She still drives a truck, sorting and then loading her mail truck at the Brightmoor post office on Fenkell before she heads just a couple blocks west to Minock Park each morning. “When you love your job it’s not like going to work,” she says. “But I’m not 25 anymore.” Nakita uses a waist bag to protect an injured shoulder, and she still puts in a couple of hours of overtime each day, filling in for other carriers. Nakita has a husband and two kids at home, and she feels as responsible to them as she does to her customers. She reluctantly took a day off in the last three years to visit her mother who was in the hospital. “My customers depend on me,” she says. On the one day she took off, Nakita ran in to a former Minock Park resident at the hospital. The customer had moved away a few years before. “She remembered me!” Nakita recalls. “She told me that she hated to have to move, and that she wanted to give me a gift.”

The gifts given to Nakita are the same that she gives the Minock Park community: dedication, kindness, and the gift of time. This relationship did not happen immediately with all of her customers though. When Nakita first got the Minock Park route, there was a customer who missed their old carrier and most often found fault with Nakita’s method of delivering mail. Nakita has as much patience as kindness though. “I wore their evil out. It took 8 years, but it worked,” she says with a smile. Nakita’s customers look out for her. “When I’m doing my overtime and it’s dark, I’ll often hear ‘Mail lady, I’m watching you!’ They’ll stand on their front porch in the cold to make sure I get to my truck safely. Then they wave as I pull away. I like to think that I built up those relationships.”

Nakita loves her job. She likes talking with her customers and going at her own pace. Her years of cultivating relationships with her customers has paid off in shoveled porches, promptly stored garbage cans, cut grass, and people who make sure she’s safe. As for the weather, Nakita says whether it’s rain or snow, it doesn’t bother her. She dresses for the cold or heat, and heads out. Nakita has spoken to everyone on her route in Minock Park. Every day she tries to do her best. “I’m mindful that not everyone is as friendly as me. Not everyone has my disposition.” Most of her customers are friendly too. And that makes all the difference.