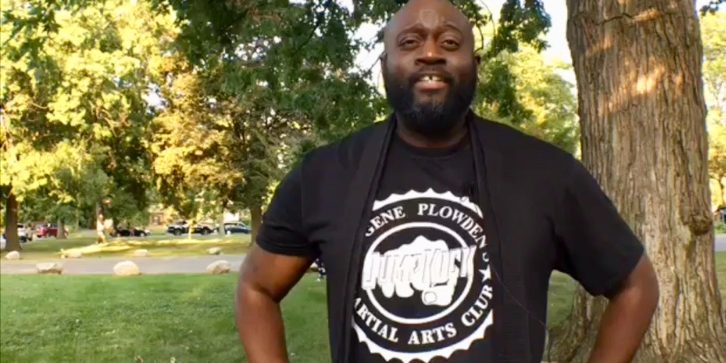 Karate has been a part of Eugene Plowden’s life for just about as long as he can remember. Although karate has become a family business, it didn’t start out that way. It was Eugene’s grandfather’s idea that his boys take karate. Eugene’s father (also named Eugene) was the first to sign up. Then his father told him to sign up his little brother Richard too. The family story goes that Uncle Richard was so bad at karate the teacher told his dad to take him out of karate: “You’re wasting your money,” the teacher said. Richard and Eugene’s dad politely declined. “No,” he told the teacher, “he’ll be back. He’s not going to quit.” Several years and many belts later, Richard Plowden is one of the most highly respected karate teachers and coaches in the country.

Eugene is Richard’s nephew, and Richard’s persistence and patience is not lost on him. Along with the many karate formations, in karate Eugene learned “you can do anything you set your mind to, that karate is more mental than physical, and it demands patience.” Eugene spent years competing as well, but more recently he has focused on teaching, passing on what he has learned about focus, discipline and patience. As you will see, Eugene “loves watching the kids grow,” and his gift for teaching was recently recognized by the city of Detroit who awarded Eugene a Spirit of Detroit Award this year. Eugene continues to teach in many places, and in Grandmont Rosedale we are fortunate that Eugene teaches at the North Rosedale Park Community House Tuesday and Thursday evenings. Check out the video, and if you’d like to find out more about karate lessons, go to https://www.nrpca.org/events/2019/1/24/eugene-plowdens-martial-arts-youth-classes