“I Was Here” Talk at Always Brewing Detroit Draws a Crowd 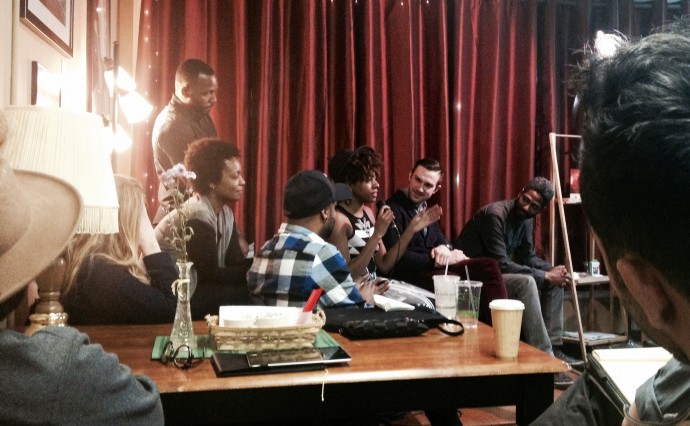 According to hosts Lauren Hood and Ryan Barrett, the “I Was Here” speaker/dialogue series held at Always Brewing Detroit on March 24, is designed to “preserve the narratives of people who lived in Detroit before it was ‘easy’ to live in Detroit.” The three featured speakers were Cornetta Lane from Core City, Robbie Dwight from Rosedale Park and Joel Fluent Greene from the West side. All three were raised in Detroit and all three offered eloquent and thoughtful responses to questions posed by the hosts and the audience.

When asked about her experience growing up Detroit and her current relationship with the city, Cornetta Lane remembered growing up on a block that had “lots of houses and lots of families.” She felt connected to these families and to her neighborhood. When the housing foreclosure crisis hit, however, Cornetta watched “families leave, which meant vacant lots.” She lost the connection she once had with her neighborhood. More recently, Habitat for Humanity has built homes in Core City, and Cornetta sees families returning. Her hope for a new connection to her old neighborhood was apparent.

Robbie Dwight credited Grandmont Rosedale Development Corporation, and the dedicated residents of Grandmont Rosedale with keeping his community relatively stable during the housing crisis. “GRDC saw the problem with vacant homes and worked on a solution with the people in the community.” Robbie did not lose his connection to his neighborhood. In fact, he still stays “super connected. I consider myself lucky to be born and raised in Rosedale Park, not just Detroit.”

Joel Fluent Greene remembered the access he had to downtown businesses as a young person. He remembered particularly fondly a “hip hop shop downtown” and all the places he could go to hear and try out new music, new poetry, and he emphasized that the new people moving to Detroit “need to respect and understand what was here already.” He remembered a lot of hard working people in Detroit who “worked for whatever they got.” Joel summed up by proposing a new perspective on how people new to Detroit might approach the city and its longtime residents: “I didn’t save Detroit; Detroit saved me.”

Cornetta and Robbie echoed Joel’s emphasis. “People from many backgrounds have been here and want to be understood and respected for the work that’s been done,” said Robbie, “and we need to make sure that the poor and old are taken care of in the revitalization.” Cornetta’s neighborhood has been renamed, and she pointed out that “it doesn’t feel good when your neighborhood gets rebranded without input from the people who live there.”

As an example of a new business that has come to Detroit and become an asset to the community, Joel highlighted Always Brewing Detroit: “Always Brewing is a hub in the community. This is how growth happens. Businesses and people need to engage in the communities, search out what’s already going on and ask the people in the communities what they need, and how they can help.” Questions and comments from the audience followed the speakers’ responses and lead to many conversations that went on well past the official end time for the talk.

At the close of the evening, host Ryan Barrett reminded the audience that the aim of the series is to “challenge the narrative that Detroiters have wasted time and money, that nothing has been happening – the blank slate theory. We want to tell our own stories using our own outlets.” If the crowd at Always Brewing is any indication, people are very interested in hearing the Detroiters who were here.

The “I Was Here” series is held every other month on Tuesday evenings at venues all around Detroit. For more information contact iwasheredetroit@gmail.com.