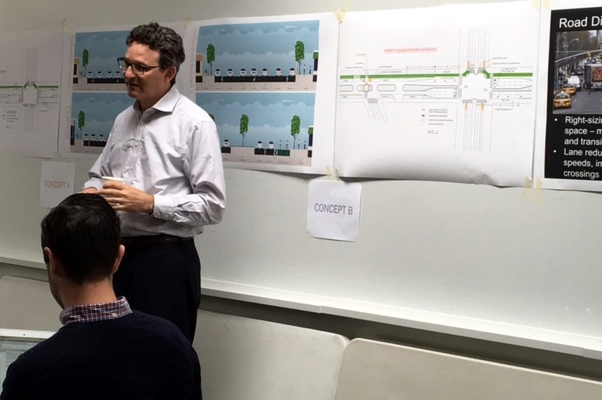 On June 6th and 7th, Bloomberg Associates and Grandmont Rosedale Development Corporation held two public meetings, piggybacking on the Grand River Avenue Design Workshop facilitated by Dover, Kohl & Partners in April. Whereas April’s workshop used a charrette format to capture a larger vision from attendees, the recent meetings helped gather feedback on two specific redesigns for the 7-lane commercial corridor. Option A featured on-street parking, two travel lanes in either direction, a 10’ left turn lane and parking-protected bike lanes on the north side of the street. Option B had all of the same elements, but reduced the travel lanes down to one in either direction with a 24’ median running down the center. Overall, attendees were enthusiastic about the possibility of change coming to Grand River Avenue, citing its wide, speedy character as needing a traffic-calming design. People also were pleased that any changes would be implemented using tactical urbanism, which ‘tests’ concepts using paint and measuring community-specified metrics. One attendee mentioned that, “…testing out designs with paint on the street first sounds great compared to building and hoping for the best.” 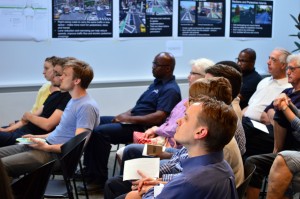