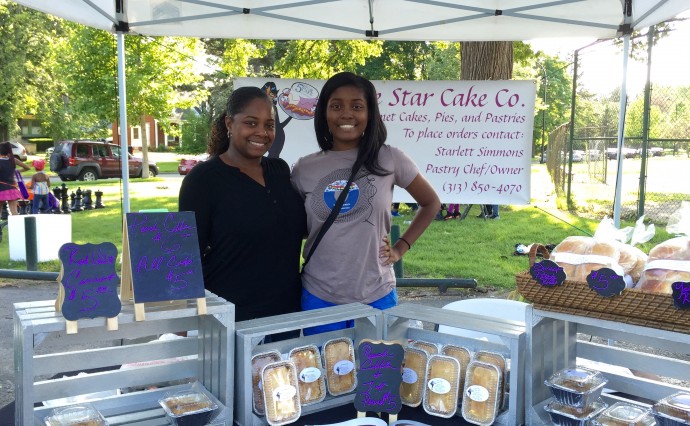 For Starlett, baking began as a way to relieve stress at the end of a long day as an accountant. At first, Starlett’s baking was a lot of experimentation. She did not grow up learning how to bake; she learned much of what she knows about pastries in culinary art school, and she quickly discovered that not only did baking work well as a stress reliever, the cakes and cookies and pies she was baking were really, really delicious. As an accounting supervisor, Starlett liked baking cookies for her staff. Soon she started getting orders. Her family got some of her goodies, too. Responding to co-worker and family requests, one Thanksgiving Starlett made 20 cakes. German chocolate cake, caramel cake, carrot cake – there wasn’t a cake she could bake that didn’t make people want more of. Starlett’s husband saw that Starlett enjoyed the baking at that she was looking for a more flexible work schedule so that she would be able to attend her daughter Kai’s school events. “Ready yet?” Starlett’s husband asked, looking to see if she was ready to bake full-time. “Not yet,” Starlett answered. Her baking was indeed starting to look like it could be a viable business, but Starlett knew she needed some help.

Just in time, Starlett found Detroit Kitchen Connect, and she was on her way to starting her own business. Detroit Kitchen Connect helps food entrepreneurs by providing “reliable, accessible space for local entrepreneurs, community members and organizations to process high-quality food products in a diverse and collaborative learning environment.” This connection eventually put Starlett in touch with the Eastern Market Corporation and FoodLab Detroit. Now you don’t have to be a co-worker or family member to enjoy Starlett’s pastries. Inspired by her dad’s love for her “five star” cakes, Starlett named her business Five Star Cake Company and now sells her pastries at Eastern Market, events around town, to customers who contact her looking for delicious desserts, and she was featured on channel 4.  You can also find her at the Northwest Detroit Farmers’ Market every Thursday.

Not only has Starlett’s new business allowed her to attend her daughter Kai’s activities, now Kai often helps her mother out in the kitchen and at the Market. Kai’s favorite is strawberry cake. Her second favorite is peach cobbler. She doesn’t just try the cakes though; she also bakes bread and “the occasional pie crust when my mom is really busy.” Kai discovered that she too enjoys baking, but she has her own interests. Lately she has been experimenting with Japanese Cheesecake and matcha macaroons which include Japanese green tea. Starlett continues to test out new recipes, experimenting with fruit flavorings and different chocolates, and lately has been looking into including some gluten free pastries, but, as Starlett says, “It’s gotta be good or we won’t bake it.” She will make vegan pastries on request.