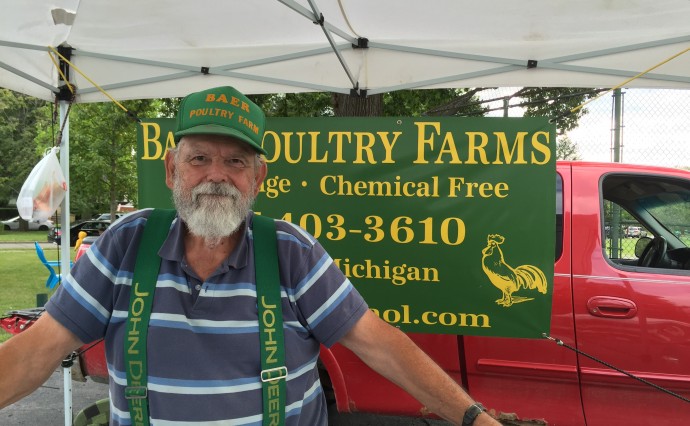 Karl Baer of Baer Poultry Farms in Adrian, Michigan is one of our returning vendors at the Northwest Detroit Farmers’ Market. Both Karl and his wife Carolyn were raised on farms in Michigan and in fact Karl and Carolyn currently live on Carolyn’s five-generation family farm. They raise free-range, USDA inspected, chemical-free chickens and turkeys. When Karl has  large orders for turkeys around the holidays, he gets help from a neighboring turkey farmer who once had 2500 turkeys but has since downsized since he, at 96, thought he was getting a bit old. Karl also sells chemical free beef and pork at the Market. He gets this meat from another Michigan farmer who raises and butchers his own meat. Karl raised cattle when he was younger, but, as he says, “they are big animals. It’s a pretty physical job. I can direct chickens and turkeys with my hands and noises. Turkeys especially respond to direction.”

Karl was a vendor the first year, ten years ago, at the Market. He took a few years off for health reasons, but is happy to be back. It was Norris Stephens from Good Medicine Farms, another faithful Market vendor, who told Karl about the Market ten years ago. When the two of them were at a market in Ypsilanti, Norris told Karl that he had joined the Northwest Detroit Farmers’ Market in its first year and that Karl needed to “go to Northwest Detroit too!”

When the Market closes in October, you needn’t be without fresh poultry or eggs. Karl delivers every other week in Grandmont Rosedale. You just have to get on his list. Karl is so reliable that one cold November morning Karl set out to deliver a truckload of fresh frozen turkeys for many Grandmont Rosedale Thanksgiving Day tables. He arrived at Bushnell Congregational Church and got stuck in the snow with not a customer in sight. Karl admits he had second thoughts about his offer to deliver, but then suddenly everyone who ordered a fresh turkey showed up, and Karl thought “Aha! Now I remember why I do this!”

When customers come by Karl’s booth, he offers them a friendly “Hello!” and an explanation of where the meats come from and even some ideas about preparation. His favorite dish is a pork cutlet with salt, pepper, garlic, flour and egg wash with bread crumbs, and then a “low and slow bake. Don’t rush it.” This year Karl’s farm has grown. He had a barn renovated with more space for his chickens and turkeys to brood. He enjoys the animals, and even his wife who continues to work as a nurse adds her own expertise: “If there’s a hurt bird, she takes care of it. She’s an angel,” says Karl.

To be added to Karl’s delivery route, or to find out more information, contact Karl at 517.403.3610, adrianbaer@aol.com, or check out baerpoultryfarms.com. The Northwest Detroit Farmers’ Market is at the North Rosedale Park Community House, 18445 Scarsdale every Thursday from 4 – 8 pm through Thursday, October 1.