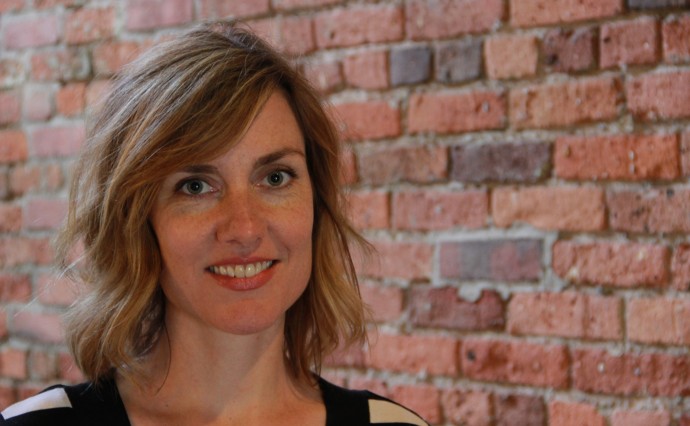 When Sarah Hulett wanted to learn about the school options available for her daughters, she began by asking other parents to help her find out what she needed to know. It is this same discovery-through-collaboration strategy that informs what Sarah does for a living, and why she chose Grandmont Rosedale as a place to live. As the Assistant News Director of Michigan Public Radio, Sarah’s work takes her all over Michigan, into all types of living rooms. She has done in-depth stories as close as Brightmoor, and as far away as the Great Lakes, and she covers Michigan politics as well as education.

Before she became Assistant News Director, Sarah did a story on the 1967 Riots/Rebellion. It was her favorite project because she got the opportunity to hear her grandfather’s perspective. He was a 10th Precinct police officer back then, and his memories of those violent days were still vivid when she interviewed him many years later. Hearing her grandfather’s perspective and understanding its value as a first-person account shaped her interest in including as many voices as possible in her work. Much of her current focus is on Detroit: “I’m interested in how we’re living together,” says Sarah. She often thinks about “whose city Detroit is, what the different camps are, whose vision is included, and what  understanding there is among and between these camps.” Sarah is clearly interested in finding out more and more deeply what makes our city, her city run.

This focus may seem odd for someone who grew up in rural Lapeer County, but she visited Detroit often as a kid, frequently going to such places as the DIA, and the Traffic Jam and Snug restaurant. “Detroit is a place that always drew me,” Sarah remembers, “and I knew I wanted to live in a city.” Sarah’s first place in Detroit was in Grixdale, just east of Palmer Park, then she moved to Woodbridge, and then when she was ready to buy a house, to Grandmont Rosedale. Sarah already knew a Grandmont Rosedale resident – WDET public radio News Director, Jerome Vaughn. Several years before Sarah had called Jerome “out of the blue, without knowing him and told him ‘I want to be an intern at WDET.’ And he said okay!”

Sarah interned at WDET for about two years after graduating with a degree in English from Michigan State University. She also worked as a copy editor at the recently terminated Michigan Citizen where she met “people who were so thoughtful and different. It was a real eye opener.” At Michigan Public Radio Sarah has been a reporter, writer, and, for the last four years, Assistant News Director. Her appreciation of perspective, especially perspective that doesn’t often get any air time or print space, has deepened. No matter where she has worked, Sarah loves just about every aspect of her work. “I love writing, and I like editing and working with someone on their piece and letting the writer’s voice carry through. I love reporting because I get to talk to people about policy, about intimate things, and I have access to regular people and officials that I never would have otherwise. It’s a privilege.”

When it came time to find a house, Sarah and her husband Brian Wybenga, checked out Grandmont Rosedale and discovered that they could get quite a bit of house for their money. “Then we moved in and really loved how tight-knit the community is.” Like their mother, Sarah’s two girls love going on adventures in the city. In fact, they use Canvas Detroit, a book that covers architecture, art and photography in Detroit as a sort of guide book for their next outing. To see Detroit as a place to explore, study and learn from is central to Sarah’s work as an assistant news director and as a mother. That’s a pretty interesting perspective for a kid from the country.