Rosedale Soccer in its 36th Season 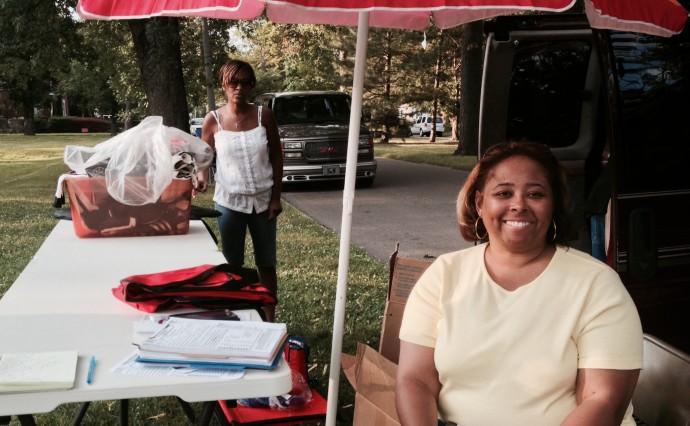 Co-Commissioner of the Rosedale Soccer League Deborah Lowery sat at a table full of cleats for sale at $5.00 a pair and answered parents’ questions about uniforms, game times, and registration.  Deborah has been co-commissioning the league with Rosedale Park resident Stacie Harris since 2008, and before that was the sole commissioner for eight years.  As Deborah does not have any kids playing soccer this year, she truly runs the league “For the love of the game and for the kids.”

36 years ago, in 1978, North Rosedale Park residents Betty and Jim Johnson had the idea to start a soccer league not just for kids who lived in North Rosedale Park, but for anyone who wanted to play.  They figured they would get about 100 kids that first year.  300 signed up.  This simple desire to develop a love of soccer among area youth is accompanied by, what Deborah calls, her first priority:  “To develop good sportsmanship.  The kids have to learn how to win and how to lose.”

Coaches play a big part in encouraging this atmosphere of fun and respect.  This year there are 22 teams with 22 coaches and several assistant coaches showing the kids how to dribble, shoot, save, and score.  There are also several age group coordinators who organize the players onto the teams, and make sure they have uniforms.  There are people who prepare the fields each season, marking the field and goal lines for the three fields at the North Rosedale Park Community House where all the games are played.  All of these people who make Rosedale Soccer happen are volunteers.  Some of them don’t even have kids who are playing anymore.  These adults and parents just really love the league and watching the kids learn and grow.  In fact, some of the kids who once played in the league are now coaches!  There is one role on the fields that is a paid position, and that’s the referee.  Anyone can begin reffing, with the free referee training provided by the league, at age 13.  For a lot of these referees, this is their first job. Of course, a lot of the refs are former players and so understand the importance good sportsmanship because they learned it playing in the Rosedale Soccer league.

This season Rosedale Soccer has about 250 kids.  When Deborah first started as commissioner, the numbers were closer to 600.  Deborah attributes much of this decrease in enrollment to the difficult economy.  The fee to play is $75, but assistance is available.  The used cleats that Deborah sells at the beginning of the season, the fee that families pay to play soccer, and even the photographer who takes pictures of the teams all contribute toward this scholarship program.  Usually 10-15 scholarships or partial scholarships are offered each year.  “We really just want the kids to be able to play if they want to play,” says Deborah.  It truly is, as Deborah says, “a family-like league.”  And that’s why it’s yet another great thing about living in Grandmont Rosedale.

Rosedale Soccer has teams for players ages 4-17.  The season is eight games long, this year running from Aug. 9 – Oct. 4 (there are no games on Sat. Aug. 30 because of Labor Day).  All the games are played on the fields at the North Rosedale Park Community House, 18445 Scarsdale.  Practices usually take place at the Community House as well, but the days and times vary per team (and the coaches’ availability).  The website for the league is rosedalesoccerleague.org, and their phone is 1-888-505-8959.  Sign-up is the first two Saturdays in June, but as it’s a family league – you or someone you know might still be able to get on a team.

Even if you don’t know someone on the team, stop the Park on a Saturday morning in September and watch a game for a minute or two.  Take a second to be proud and grateful that you live in a community that so nourishes its children that it devotes Saturdays to teaching them how to win, lose, and just have fun.