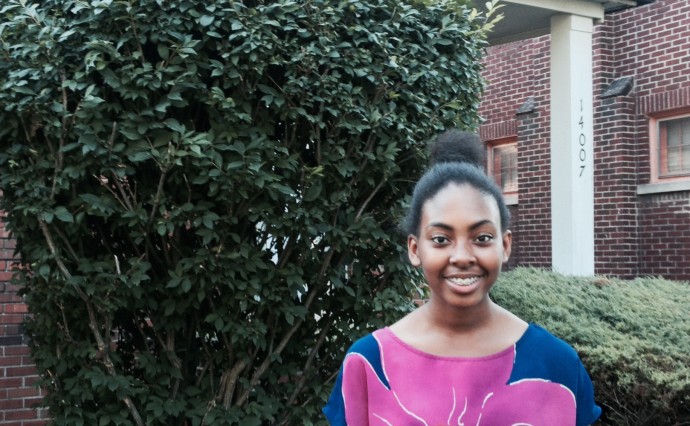 Grandmont #1 resident De’Janay Jones, age 16, is not too proud to do the hard and sometimes dirty work necessary to make Detroit a bit cleaner each day.  She also designs and makes clothes that have turned some heads.

This summer, Monday through Wednesday from early in the morning to late afternoon, De’Janay is either at Belle Isle, in Auburn Hills, or maybe even along a highway, working for the Michigan Department of Transportation, (MDOT), picking up trash, taking care of new trees and generally making wherever she is better.  In spite of the hard work and early start time, De’Janay enjoys her first full-time job:  “It’s fun, but I’m really tired when I get home.”  On Thursdays and Fridays the MDOT Youth Development and Mentoring Program in which De’Janay is enrolled, might take De’Janay and the other 16-18 year olds in the program to visit the Wayne State University campus, or to a workshop about sexual harassment and discrimination.  De’Janay’s enrollment and acceptance in the program was dependent upon good grades in school, teacher recommendation, and a willingness to work hard.  De’Janay had all three.  She’s also used to being busy and committed to several activities.

De’Janay began swimming on a swim team in 7th grade, (she competes in free style and relay, but her favorite is back stroke).  She also runs track, (she does the 100 meter and long jump).  She helped start the Grandmont #1 Positive Youth Development scholarship program, (she attends monthly meetings and often helps out with the younger kids).  Her most recent activity has been learning how to sew; she attended two summers’ worth of sewing classes at the YMCA.  It’s this last venture that De’Janay believes will most influence what she will study in college.  De’Janay is very interested in the New York City fashion world, but she’s also aware of the high cost of living in New York.  She’s so interested in fact that she drew up a budget for how much it would cost for her to live in New York.  After figuring the cost of Columbia University or maybe New York University, and the food and rent, De’Janay came to a realization:  “I really need a roommate!”

De’Janay has enjoyed styling girls’ clothing since she was little.  When she was 9, De’Janay designed, crocheted and sold small girls’ purses at local craft shows.  One of her customers was so impressed with her initiative and creativity that the customer offered to cover the cost of the rental fee for the booth at the show.  Now that she’s older, De’Janay’s fashion projects have become more involved.  At the most recent sewing class she took, De’Janay successfully made the requisite poncho and lace shawl.  A skirt was the final project for the class, and this is where De’Janay’s interest in design became evident.  Her skirt combined both denim and lace, the only one of its kind in the class.  Her “It came out all right” is typical of her humility, but her quiet smile is evidence that she was pleased.  Friends have known about De’Janay’s eye for design for quite some time and often ask for her input when putting outfits together.  For her, it’s all pretty effortless:  “I like to dress up, to look nice.  It’s fun.”

De’Janay’s unique combination of community involvement and a gift for design will lead her to some interesting places and fascinating experiences.  For now, though, she’s staying put.  She’ll continue in school, deriving the most pleasure out of her social studies classes.  She’ll also keep helping out in Grandmont #1 because helping with things like the Annual Picnic is fun.  You can bet that no matter what she’s involved in, though, she’ll keep thinking up new design ideas.  In a couple of years, you might want to keep an eye open for a new, young fashion designer from Detroit.