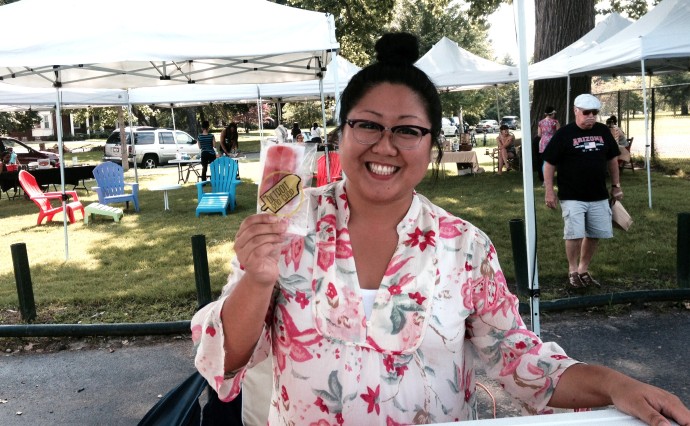 Maybe you’ve tried the Faygo Red Pop Float, or the Kiwi Pineapple, or the Strawberry Lemonade, or the Cantaloupe Mint, or may be even the Grapefruit Habanero.  If you’ve been to the Northwest Detroit Farmers’ Market this season, chances are you recognize these as popsicle flavors created by The Detroit Pop Shop owners Hildie and Bryan Haviland.  Kitchen chemist and experimental popsicle makers Hildie and her husband Bryan began their frozen adventure in January of this year. They started in their own kitchen trying out different flavors, making some really good ones, and sold their first popsicles in May.  That’s three months from a crazy idea in their home kitchen to catering corporate events, weddings, the Faster Horses Music Festival, and selling their popsicles at two farmers’ markets and several independent stores in and around Detroit.

The Havilands’ popsicle story is a story about jealousy, mad science, and finally unexpected and unexpectedly fun success.  For years Hildie had to watch her husband Bryan eat ice cream.  Hildie is lactose intolerant, so she opted for popsicles rather than forego a frozen treat.  Over time, Hildie became a very educated popsicle eater.  “I’d eat fruit pops, but even fruit pops have a lot of chemicals and dyes and are only about 10% fruit juice.”  Inspired by the Food Network show “The Best Thing I Ever Ate,” Hildie and Bryan decided that their kitchen could become a laboratory for creating the best popsicle Hildie ever ate.  They soon discovered that making great popsicles requires the perfect balance between freezing and flavor.  Those early days (all of three months ago) produced some scientific blunders as well as some delicious discoveries.  The chemical result of combining the tapioca of a bubble tea with very low temperatures turned out to be gooey jawbreakers – not something Hildie and Bryan thought would gain much of a following.  The cereal milk popsicle tasted less like the sweet milk left in the bottom of the bowl of cereal and more like cardboard, but back to the drawing board they went.  They discovered that they could include an entire oreo in an oreo cream pop and suspend an entire kiwi slice in a kiwi pop.  Beautiful as well as delicious.  This system of experimentation, testing, and experimenting again is quite time-consuming though.  It takes two days to hand pour 500 popsicles.  This is done when Hildie and Bryan aren’t at work, often until the wee hours of the morning.  They are understandably thinking about investing in super freezer.  With a super freezer the time it takes to make 500 popsicles would go from two days to 15 minutes.

Some of those nights in the kitchen were spent experimenting with some other, more adult flavors, the kind of flavors you’d need an ID to buy.  These “boozecicles” come in Spiced Eggnog, Cinnamon John Daly, Drunk Arnold Palmer, and Margarita (with or without salt, of course).  Some experiments in the kitchen are more fun than others!

For now, Hilde and Bryan are leasing a kitchen and doing pop-ups around town, selling at various farmers’ markets and stores, and some catering.  They may open up a retail space eventually, but their focus is on having fun.  At least half the fun of making popsicles for Hildie and Bryan is the interaction with the people who try them out: “It’s the people, the community part of this that’s so fun.  We don’t get that in our cubicles at our regular jobs. We do this because we love getting people to try something weird and wacky and then giving us feedback.”

Come get these popsicles from the Farmer’s Market while you can.  They’re delicious and sometimes even really pretty.  And you know that they’ve been made by people who share a sense of adventure and whimsy.  Their motto, according to Hildie, is “Happiness is to be shared.”  So the next time you’re at the market, see if there’s a kid around looking longingly at the Caramel Corn popsicle with the pieces of popcorn on the outside, or the latest flavor to come out of the kitchen of the The Detroit Pop Shop.  See if you can’t treat.