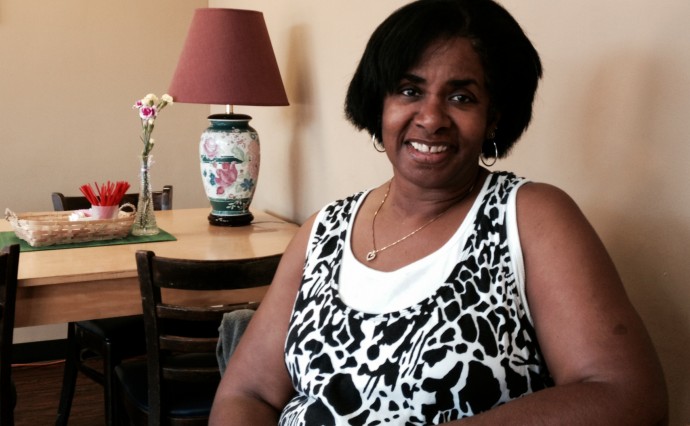 Kathy is the oldest daughter of eight.  She has two sisters and five brothers.  They all grew up on Ivanhoe Street in a great big house in a neighborhood that was full of kids, “One family had 12 kids, the family down the street had 11, next door there were eight.”  Kathy’s grandmother cooked, and her mom rang a dinner bell to call all the kids in for dinner.  Eventually all the kids grew up and moved out on their own.  Kathy’s parents moved from Ivanhoe Street to Glastonbury in Rosedale Park.  Kathy and her husband did not set out to buy the house next door to Kathy’s parents, but “the house had everything we wanted.”  Kathy checks on her parents every day, and when she goes out of town her siblings come by to check on their parents.            Kathy’s sisters Christine and Susan live in Rosedale and North Rosedale.  Among the three of them there are 11 boys, no girls, and several have played football.  That’s a lot of groceries.  According to Kathy, Susan is the nurturing one, Christine is the one who is in charge of decorating for parties, and she, Kathy, is the one who hollers at the boys.  “They know if I give them a ride somewhere they’re going to get a lecture about something.”  Everyone has a role to play.

Even though their parents are retired, (Kathy’s dad retired just last year at 81), these parents of eight continue to welcome kids into their home.  After retiring as a principal, Kathy’s mom agreed to look after a niece.  Eventually Kathy’s mom looked after some grandchildren as well.  The kids ranged in age from preschool through high school, sometimes staying with the grandparents or one of the aunts for a summer, sometimes just for a weekend.  The siblings and nephews and cousins and parents have always kept close tabs on one another.  They have supported one another through car trouble, kid trouble, college degrees, divorce, miscarriages, and even help one another with grocery shopping.

Come December, Kathy’s mom will start looking for the biggest turkey she can find.  She tries to find one about 25 pounds.  The turkey will be accompanied by a ham and maybe even a roast beef.  Kathy, Susan, Christine, and their brothers will come over with side dishes and a lot of their kids – well over 20 people usually show up.  One year one of the sons took over Christmas and had it at his house.  They never did that again.  They all agreed that Christmas had to happen at their parents’ house in Rosedale Park.  So this year they’ll set the table in the dining room and two more in the family room and living room.  They’ll fill their plates buffet-style with all the fixings, sit down and enjoy each other’s company.

This understanding of the importance of community goes beyond their family.  Kathy is also the president of the Rosedale Park Radio Patrol.  Her mom, dad and sister Christine also volunteer for the Radio Patrol.  Kathy does it because, as she says, “I’m nosy.  I like to know what’s going on.  I feel connected.”  While their family connection is strong, they all are very aware that they live in a wider community where connection and involvement is essential to maintaining that community.  Looks like the days of neighborhood connections and cooperation are alive and well in Grandmont Rosedale.

Former GRDC intern Amy Kuras wrote a terrific article about the 100 year old elm tree Kathy has, against all odds, kept alive through years of devastating Dutch Elm Disease.  You can read that article HERE