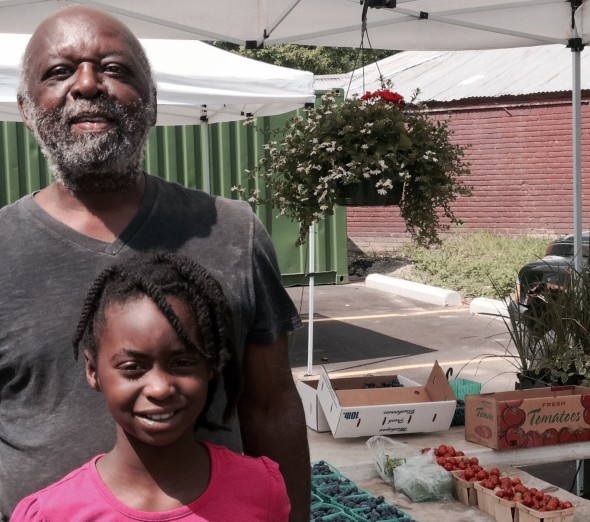 Norris Stephens of Good Medicine Farm has been a vendor with the Northwest Detroit Farmers’ Market since its beginning nine years ago. Norris is a second generation farmer who grew up in Romulus.   As a kid, during the harvest season, Norris stayed at the farm in Hillsdale County where his parents farmed soybeans, wheat, and hay.  Although he started helping out on his parents’ farm as a 10 year old kid, Norris attributes his love of gardening to his grandparents who “always had a garden.”  Inspired and encouraged by his grandparents, at about 7 years old Norris started his own garden:  “I grew tomatoes, green beans, corn.  I really took to doing it.”  Soon Norris expanded his enterprise:  “A neighbor was giving away chicks so I took about half a dozen.  I had an old dog house that I turned into a chicken coop.  They were pets at first, and then we started getting eggs.  I was about 8 years old.”

As a teenager none of Norris’ friends were involved in gardening or farming, but Norris remained involved because “now I could drive the tractor.”  In fact, this interest in the equipment and machinery side of farming became Norris’ field of study at Michigan State University.  After graduation Norris was a farm equipment dealer in Taylor and then went back to MSU to study soil science after which he worked for a fertilizer company.  Even though Norris spent much of his time in school and working, he continued to farm part-time.  His parents sold their farm in Hillsdale and bought a 40 acre farm in Milan with a focus on produce.  Feeling restless working for larger companies, and with the encouragement of his father, Norris decided to farm full-time.

Norris has farmed the Milan farm full-time for about 15 years.  He has added a greenhouse and is thinking about setting aside some land for cut flowers.  His dad stopped farming in the 1970s, but he has also always had a drug store, where at 94, he still works.  Norris is very content with his decision to farm full-time.  “I like to see things grow.  I get a good feeling, especially when the things I plant succeed.  A friend of mine told me that there’s something noble in what I do.  I feed people.  I never thought of it like that.”  In keeping with family tradition, several of Norris’ 30 grandchildren help out on the farm.  A daughter and son-in-law also can and freeze a good deal of produce for the winter.  Norris quits farming usually around Halloween.  Last winter, for the first time Norris traveled, visiting friends and family in Alabama and South Carolina.  It turned out to be a good winter to travel South.  He knows he avoided a very harsh winter and says he “might try that again this winter.”

For now, though, Norris is staying put.  You’ll see him every Thursday at the Northwest Detroit Farmers’ Market from 4 – 8pm at the North Rosedale Park Community House, 18445 Scarsdale.  Norris and his son-in-law are regulars at five other farmers markets, but Norris “likes coming” to the Northwest Detroit Farmers’ Market.  “It’s been good to me.  I have friends and cousins who live in Detroit.  It’s like coming home.”