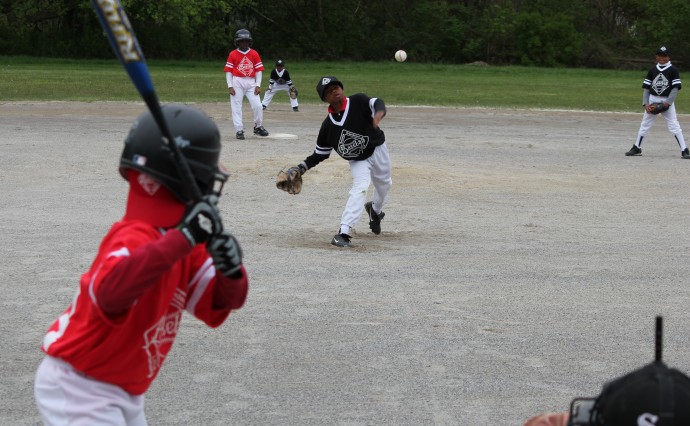 What Coach Chris Gregory most wants everyone to know about this year’s 13-14 year old junior baseball team, the Rosedale Raiders, is that it is “their dedication and effort” that made their advancement to the state tournament possible.  Coach Chris knows what hard work looks like; he’s been coaching in Rosedale Grandmont Little League for over 20 years.  “We’ve had talented teams in the past, but there’s something special about this team.”

As an example of the team’s dedication, Coach Chris tells the following story:  “Our ritual is to meet at Stoepel an hour before each game for batting practice.  On Saturday, July 5, our tournament game in Taylor started at 9am.  We were to report to the field in Taylor at 8am.  In order to get our batting practice in before the game, we had to meet at Stoepel at 6am.  I asked the kids if that’s what they wanted to do.  Every last one of them said yes, including the player who was on crutches because of a bad slide into second.  And they came – they were all there at Stoepel at 6am on a Saturday, crutches and all.”

The state tournament is this weekend in Onsted, Michigan at Onsted Community High School.  The first game is Friday, July 25 at noon.  The teams in these state finals will play in two pools.  Each team will play three games this weekend.  The two teams in each pool with the best records will play Monday in the semi-finals, and then the winners of the semifinal games will play in the finals on Tuesday.  Then next step is the Regionals – one step closer to the Little League World Series games.  “It’s a long process,” Coach Chris admits, “but one that’s well worth taking.”

A big part of the reason for the team’s success is that these kids have been playing together since they were nine and ten.  The coaches too have been “working together since day one.”  Working with Coach Chris are Maurice Yanish and Rick Floyd.  Like the kids, these coaches are a team:  “Each of us brings something unique and worthwhile to the team.  These coaches have an amazing work ethic and it has paid off.”   Coach Chris also credits the players’ parents with demonstrating “phenomenal support”.  The support from Rosedale Grandmont Little League itself has also been a big part of the team’s success.  In fact, Coach Chris is really hoping RGLL families carry on the tradition of supporting the teams that play in tournaments.  Having a big RGLL crowd cheering the Rosedale Raiders on would make the weekend just about perfect.  Whether or not you have a player on the team, Coach Chris would love to see you there:  “We want everybody to come and show support for our RGLL team!”  You can find a map to the tournament in Onsted HERE.