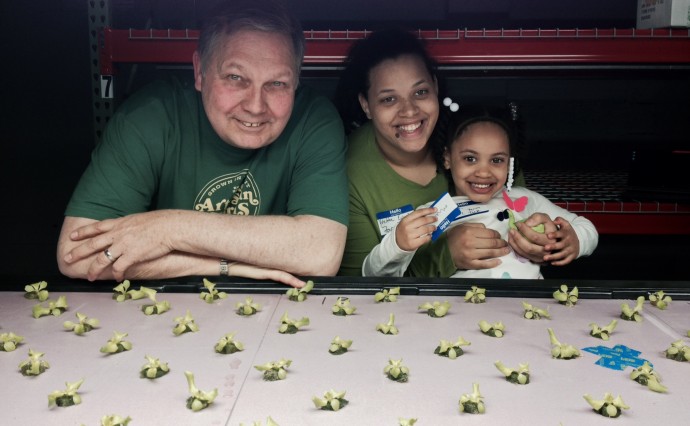 Vertical hydroponic farming uses 92% less water and eliminates agricultural run-off.  Vertical hydroponic farming compresses the food supply chain which means more money for the farmer and fresher food. Having trouble visualizing a vertical hydroponic farm? Think long bunk beds, light, the sound of water gurgling, and hundreds of healthy green lettuce leaves growing in evenly spaced holes in beds and you’ll get a good idea of what Jeff Adams’ Artesian Farms at 12843 Artesian looks like. If you’d like to learn more about how vertical hydroponic farming is a terrific way to enjoy a deliciously fresh, locally grown salad, you might want to talk with Yvette who is Artesian Farms’ first employee. Yvette was trained by Milan Kluko at Greenspirit Farms in New Buffalo in West Michigan where, as she says, she learned the “science behind the farming.” Yvette lives in Brightmoor and her new job as a Farm Technician at Artesian Farms has enabled her to get her own place for herself and her daughters. Not only is Yvette grateful to have found a full-time job so close to home, she truly enjoys the work: “It’s innovative. I get in a groove. It’s fun and calming.” As a farm technician, Yvette makes sure all the nutrients are in the soil, she harvests the crops, cleans the tanks, and keeps the farm running smoothly.

The crops Yvette harvested for the aptly scheduled Opening Day celebration on Earth Day in April were lettuces of a variety of types, packaged as “Motown Mix,” and flavorful radishes. Artesian Farms recently added fresh basil to their garden and hope to one day add bok choy to its repertoire. The bok choy found in grocery stores is often grown in California or further afield. Imagine how much smaller the carbon footprint bok choy grown in a vertical hydroponic farm just south of Schoolcraft would be. “We wanted to be in the neighborhood where the people who need the food are,” explains Jeff when asked why he chose the building on Artesian as the location for his farm. This Grand Opening of Artesian Farms was the result of a three year process that involved many people contributing a variety of skills. Jeff sees Artesian Farms not just as a farm that provides fresh produce, but as a way to address multiple issues: “Young people need an opportunity create financial stability, blighted buildings need to be addressed, and people need access to good, quality food that doesn’t negatively affect the environment. It’s about food sovereignty.” Milan Kluko of Greenspirit Farms agrees with Jeff’s assessment, adding “If you have the right technology and the right type of farming for all the right reasons, but if it doesn’t taste good, then none of that matters.” Those attending the Open House were happy to celebrate the opening of Artesian Farms, and quite happy when they were invited to take a package of Motown Mix salad greens home. The lettuces were just about as local and fresh as you can get, and the attendees were encouraged to share their thoughts about the produce, the packaging, and what other produce they would like to see.

Jeff’s gratitude for the people who contributed to the realization of Artesian Farms was evident in his tearful thanks to the investors, the many social enterprises that contributed business expertise, the vertical farmers who trained both him and Yvette, Councilman James Tate who helped spread the word, those who renovated the building which had been vacant since 1998, and finally his wife who, according to Jeff, has been “a champ” throughout the three years that preceded the opening of Artesian Farms.

If you’d like to know more about Artesian Farms, stop by the Northwest Detroit Farmers’ Market any Thursday from 4 – 8pm at the North Rosedale Park Community House, 18445 Scarsdale. Artesian Farms is one the new vendors at this year’s market, and Jeff would love to talk to you about his farm and about how important he believes it is to have a farm in the community that employs the community, provides the community with fresh food without negatively affecting the environment. For more information, call 248.318.0544. You can also check out their website: artesianfarms.com.