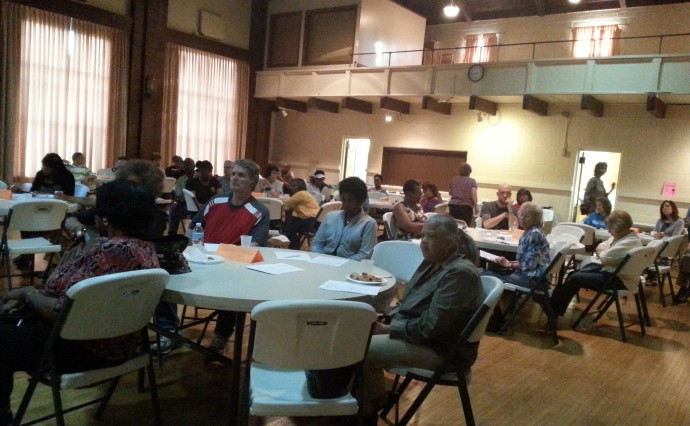 The guest speaker for the May Neighborhood Safety Meeting was Corporal Erin Diamond from the Wayne County Sheriff’s Office and chairman of the Michigan’s Human Trafficking Health Advisory Board. Attendees at the Neighborhood Safety Meeting learned several important facts about Human Trafficking and why it’s a public safety issue in Wayne County. As an investigator and electronic forensic examiner with the Southeast Michigan Crimes Against Children Task Force, Corporal Diamond pointed out that children in economically vulnerable cities are vulnerable to sex trafficking. Sex traffickers often lure their victims with false promises of money and/or gifts. They might also use threats, intimidation or threats of legal action to lure under-aged victims. The average age of human trafficking victims is 11 to 14 years old. Between 100,000 and 300,000 children are at risk for human trafficking.

Corporal Diamond further pointed out that Michigan has the second most successful record of recovering under-aged victims of child sex trafficking. In fact, Corporal Diamond named Detroit as particularly effective in combating human traffickers: “Detroit is the gold standard for human trafficking law enforcement, and the Wayne County Sheriff’s Office and Detroit Police Department are leading the charge on combating human trafficking.” The Wayne County Sheriff’s Office has recovered 475 juvenile victims since 2007.

Because about one-third of reported trafficking cases originate from community members, attendees were provided with many ways to help prevent sex trafficking. Corporal Diamond stressed the importance of being aware of one’s surroundings, and to be aware of certain behaviors that make people vulnerable to sex traffickers. Drug addiction, eating disorders, homelessness, anxiety, and a history of being abused are some of the traits that make people targets. Attendees were also encouraged to be on the lookout for other signs of trafficked victims such as multiple hotel room keys, tattoos and brandings, a lack of knowledge of the geographic area, restricted communication, and cell phones not in their parents’ names. Corporal Diamond asked attendees to report suspicious activities to local law enforcement, to pay attention to Amber Alerts and descriptions of the missing children, and to encourage children and young adults to go home when the sun starts to set. According to Corporal Diamond, “Collaboration is key. Partnerships among city, county, state, and federal law enforcement agencies have been critical” to prevent human trafficking. With the eyes and ears of citizens looking for and reporting on suspicious activity, Detroit is sure to remain in the forefront of combating human trafficking.