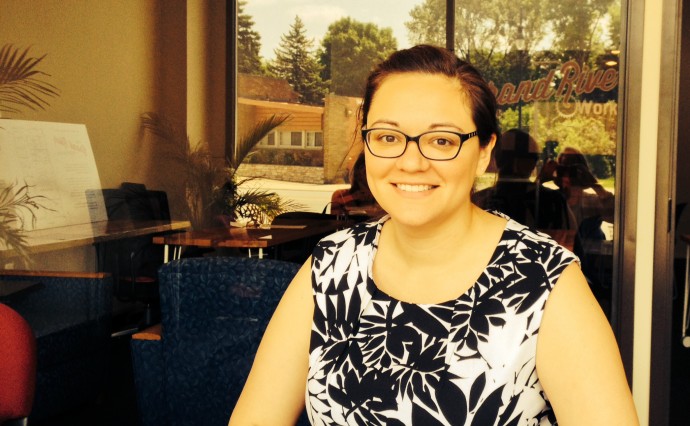 Jess Sanchez McClary doesn’t have a lot of spare time these days. Her business, McClary Drinking Vinegars, has taken off and she’s got five year old twin boys to take care of.
Yes, drinking vinegars.
Jess started off as a small business owner in 2012 baking scones, quick breads, and buckle. She sold her baked goods at farmers markets and enjoyed engaging with the customers and with the local food community. Soon, however, Jess turned her attention away from baked goods toward drinking vinegars. Jess had an interest in older preservation techniques using fermentation without preservatives. She discovered recipes for colonial era cocktails that called for drinking vinegars and was determined to figure out just how they work. At first she thought “who’s going to want to drink vinegar?” but then again, Jess remembered, these cocktails involved not just drinking vinegars, but soda water and rum or maybe gin, whisky or bourbon. Jess paired her vinegars made of locally grown produce, with recipe cards for unusual, delicious and often very colorful cocktails, and they soon began to sell very, very well.
In the beginning, it was Jess and her husband who peeled and chopped the beets (Michigan Beet and Carrot Vinegar is one of their biggest sellers). In fact, from the fall of 2014 to the spring of 2015, the beet and carrot drinking vinegar was selling so well, Jess and her husband processed 14,000 beets. It was clear that this was a project too big for two people. Looking for help in processing the produce, Jess approached the culinary school at Forgotten Harvest, whose mission it is to relieve hunger in metro Detroit and prevent nutritious food waste. Forgotten Harvest became so vital to Jess’ business that Hopeful Harvest, the for-profit subsidiary of Forgotten Harvest dedicated to the growth of the metro Detroit entrepreneurial food community, has since taken on not just the processing of the produce, but also the packing and labelling of the vinegars. As their customer base grew, Jess needed to involve another locally farm, Keep Growing Detroit, to supply their produce. McClary Bros. needed big batches of rhubarb and apples for their Michigan Rhubarb and Michigan Apple Pie Vinegars. They also needed small but unusual batches of things like paw paws, Thai basil, and Detroit-grown strawberries. Their most profitable vinegar was Fig Leaf Vinegar. At $40 a bottle rather than the usual $15, Fig Leaf Vinegar sold out almost immediately. The Fig Leaf Vinegar added an unusual and delicious flavor to cocktails that many of Jess’ customers loved. Growing figs trees in Michigan is quite a challenge, however. The trees used for the vinegars died in our last tough winter, but Jess is not one to give up easily. She’s currently looking into aquaponic growers able to grow fig trees.
Jess’ career as a successful entrepreneur did not come easy. She grew up in Indianapolis and started a publishing business with her husband. She discovered her husband was a great salesperson and she was great with the business end of things. The publishing business, however, did not work out and Jess found herself looking for a new idea. Jess enjoyed cooking, and so decided to go to culinary school. Almost immediately after making this decision, Jess learned that she was pregnant with twins. The pregnancy was not an easy one and the almost four of them moved around quite a bit looking for a place to call home. After Indianapolis and then Chicago and Seattle, they visited Eastern Market in Detroit and Jess remembers thinking “we’re home. This is the place where I want my kids to grow up.”
McClary Bros. is named after Jess’ 5 year old twin boys Jack and Ben. A guiding desire for Jess is to “have a business that my boys would be proud to have their names on.” McClary Bros. chose to become a member at the co-working space at the Grand River WorkPlace because of its many amenities, the reasonable membership rate, its proximity to her home, and because the parking is easy. Jess says she has no time to spare driving to work and searching for a place to park. The Grand River WorkPlace is the perfect fit for a growing small business owner. While Jess takes care of the business end of McClary Bros. at the Grand River WorkPlace, you’ll have to visit Eastern Market, Whole Foods, or Busch’s grocery stores to buy a bottle or two of McClary Bros. Drinking Vinegars. To find out the latest seasonal drinking vinegars as well as recipes, more about Jess and her business, and even something called “shrub soda,” visit http://www.mcclarybros.com/.