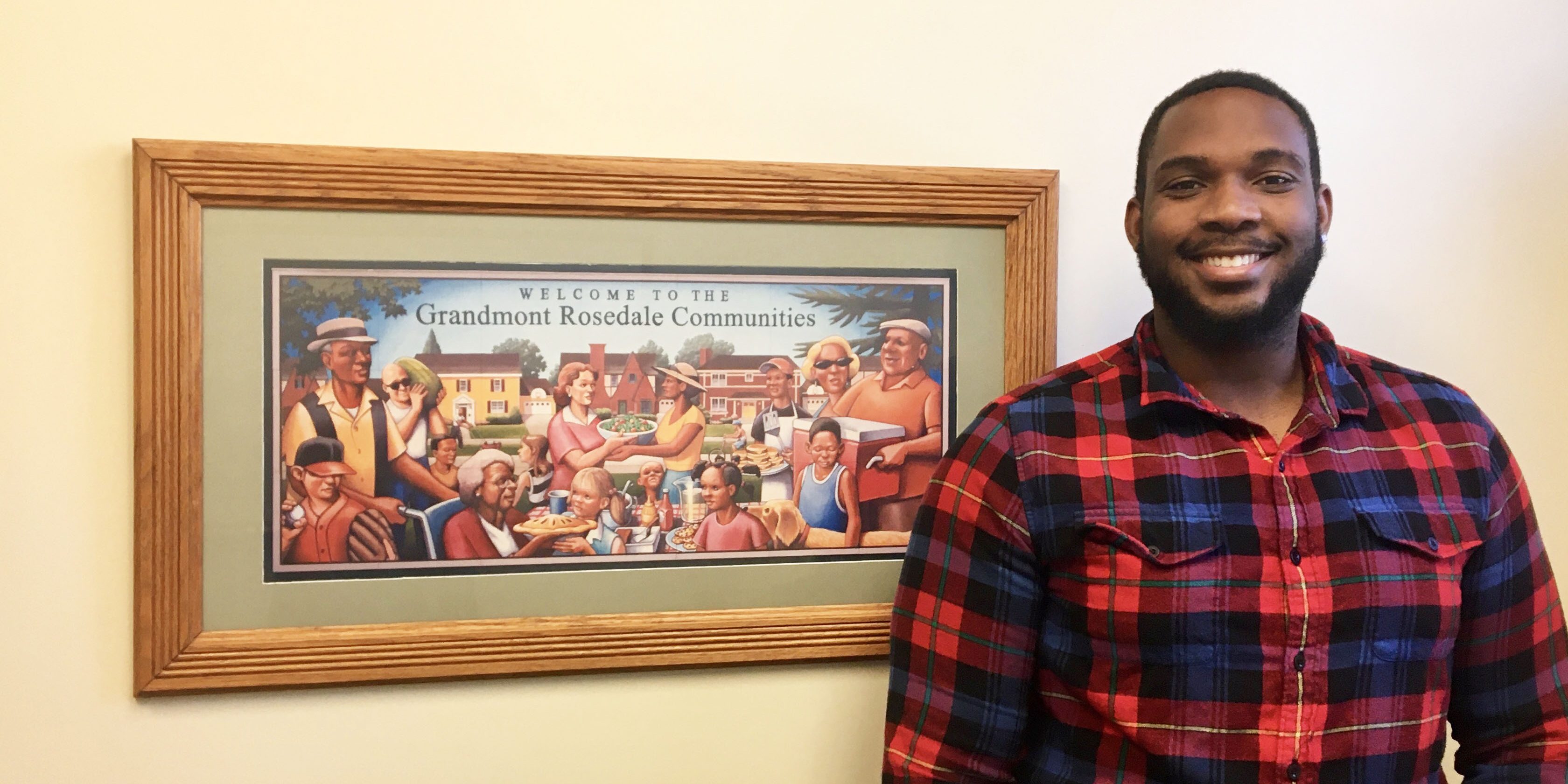 For 16 hours each week, Tre Jordan assists Kitty Yarbrough, GRDC’s Community Engagement Manager, with the Community Safety Program initiatives, the Northwest Detroit Farmers’ Market, and often helps out wherever needed. Tre reaches out to Grandmont Rosedale residents and business owners to collect their input on community events, and asks for their help with events. Tre attends city-wide meetings related to community safety and offers his younger-generation perspective on issues of personal and property safety. Tre hauls tables and chairs, he delivers flyers to businesses in the neighborhood, and he has proven to be pretty handy with a shovel. In short, Tre has quickly learned that GRDC is a busy place with a various and long list of initiatives and events that need many hands.

In May, soon after completing his internship at GRDC, Tre will earn his Master’s of Social Work degree from Wayne State University. At the beginning of the school year, Tre looked over the list of internship options his degree in Social Work – Community and Policy required. When Tre saw Grandmont Rosedale Development Corporation, he thought “I live there!”

Tre grew up and lives in Grandmont Rosedale, but until his time with GRDC, he had no idea there was so much going on in his community. The first time he really understood just how busy Grandmont Rosedale is was when he helped out at the Northwest Detroit Farmers’ Market, which turned out to be one of his favorite ways to participate. “I really like how the Market is a time for everyone to come together. Being in the community and with the community to meet people, the vendors, neighbors – it was great.”

“Working at GRDC has been very productive,” says Tre. “The work we do is beneficial to the community whether it’s interacting with the businesses, attending the CompStat meetings, developing a relationship with the police department or even the art gallery.” It all contributes toward stabilizing the community. Kitty has enlisted his help to create flyers, make phone calls, even to plant bushes for the placemaking project. “He’s willing to learn and grow,” says Kitty. “He’s receptive to feedback and to the wisdom of the community. He has shared what he has learned about all GRDC does, and his sister and mom came to the Farmers’ Market for the first time.”

In high school and college, Tre thought about other alternatives to studying Social Work, but as so often happens, he became inspired by an early college experience. While he was an undergrad studying psychology at Eastern Michigan University, Tre had a job escorting and mentoring students on the autism spectrum. He enjoyed the work so much that he continues to work with people with autism at Centria Health Care as a Behavior Technician. Tre currently works with young people at a center, interacting with them, working through programs designed for them, and helping them to socialize with one another and on field trips that they take into the community. Tre also works with a young man not much younger than himself. Tre offers a socialization aspect to these autism treatment programs that include a wide variety of emphases such a diet, juvenile justice system issues. “There are many people working together toward the best health for people with autism,” says Tre. The dynamic, connective nature of this work compliments his work at GRDC nicely. Tre plans to work toward being a Board certified Behavior Analyst while searching for work once he graduates.

Tre’s ambition and hard work is matched by his increasing understanding of the satisfaction being involved in one’s community brings. “I really enjoy having an effect on where I live,” he says.  Tre will be working with GRDC until the end of April. He would like to stay in or near Detroit once he graduates, and hopefully he’ll continue to visit the Farmers’ Market. For now though, Tre’s commute to his internship is pretty great. If you see him around, say hello and ask him what he’s working on.