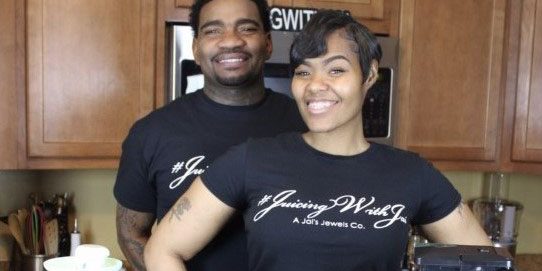 Jai and Robert’s decision to move their out-of-the-trunk juicing business into a Grandmont Rosedale location made good business sense. But their decision was influenced by other factors, too, such as the safety of this community, its vibrancy, and Jai and Robert’s history in the area. Both grew up in the Grandmont area and attended Edison Elementary School. Like so many Grandmont Rosedale residents and stakeholders, Jai recognizes this community as “a wonderful, beautiful, and safe place,” as well as an ideal place to open a business in the resurgent Detroit economy.

Jai and Robert also appreciate the culture of health and wellness that is present in Grandmont Rosedale, from Detroit Vegan Soul and Spa-a-Peel to neighborhood traditions like the Northwest Detroit Farmers’ Market. They want to expand the community’s options by bringing their unique smoothies and juices to the corridor.

JUICING ON THE RIVER

Before Juicing with Jai made it official with an LLC in 2015, it began with Jai chronicling her weight loss on social media. Jai wanted to get back to her pre-pregnancy weight, which she knew would require a substantial change in her eating habits. She took to juicing and saw rapid results, losing more than 80 lbs. She also shared her strategies with friends online. As Jai puts it, “So many of my friends wanted to participate, so I started shopping for them. I was showing them how to make a lifestyle change and soon I was being paid for my work.”

Friends gave referrals and referrals became customers. As Robert recalls, “I think the majority of our followers came from Jai’s testimony in real life. Seeing that transformation made them want to come onboard.” The couple looked at their family kitchen—now converted into a full-time juicing operation—and saw that Jai’s personal goals had morphed into a lucrative business concept.

Since then, Juicing with Jai has amassed a sizeable Metro Detroit following. The couple started a website and began shipping their smoothie and juice packs to customers around the country and even internationally, with orders pouring in from Jamaica to the UK. They did vendor events, speaking engagements, televised interviews, and special collaborations, including partnerships with several businesses in Royal Oak.

There are many juicing franchises that have sprung up in Michigan to service busy people seeking to strike a balance between convenience, taste, and nutrition. Pressed Juice Bar, which is “powered” by Juicing with Jai, is distinguished by Jai and Robert’s knowledge of and sensitivity to their customers’ dietary needs. Early on, the couple offered consultations to determine customers’ limitations and goals, from diabetic restrictions to meal replacement methods for quick weight loss. This primary research produced a selection of ready-made options that are tailored to specific diets and body types. Additionally, the couple runs the Facebook group, “The Juicing With Jai 90-Day Workout Challenge,” which incentivizes fitness by offering cash prizes and paid gym memberships to participants who’ve made significant progress towards their milestones. Grand River’s Pressed Juice Bar will offer similar promotions afforded by partnerships with local gyms and fitness gurus. In sum, Jai and Robert’s business is founded on stories of success, personal growth, and real results. You’ll recognize those values in their store and in their products.

Follow Juicing with Jai and Pressed Juice Bar on social media and remember to keep shopping small in Grandmont Rosedale!