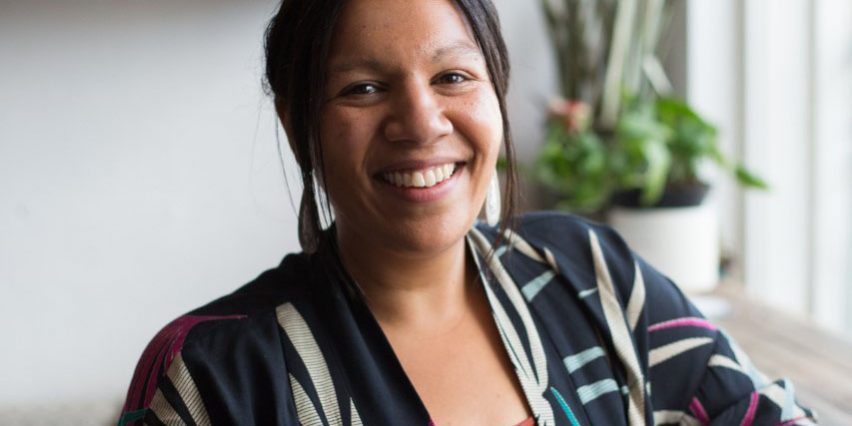 Grandmont Rosedale Development Corporation’s new Economic Development Manager is Kiki Louya—a chef and restauranteur who grew up in our very own Rosedale Park. From her beginnings in Rosedale Park (which she aptly describes as a “village”), Kiki’s ambition, skills, and knowledge have propelled her to non-profit organizations in New York, world-class kitchens in Chicago and, thankfully, back to Detroit as an experienced professional in the food industry.

In fact, A New York Times piece, “16 Black Chefs Changing Food in America,” recognizes Kiki as a changemaker in the Detroit food scene. She is the owner of FOLK, an artisanal café intended to “gather people around wholesome food and shared experiences,” and The Farmer’s Hand, a grocery store that sells local produce and specialty items. Both businesses were conceptualized with the food-based needs, culture, and aesthetics of Detroit in mind. Kiki says her approach to economic development comes from a place of wanting to serve and generate opportunities for others.

FROM FUNDRAISING TO FOOD

Kiki’s parents were professionals—her father, a civil engineer, and her mother, a registered nurse. Because Kiki was a bright student with an aptitude for number-crunching, it was always expected that she would to go into a math or science-related field. While studying Political Science at University of Michigan, Kiki landed a job at the Roostertail restaurant in Downtown Detroit. She relished her event-planning and catering responsibilities as the allure of the food world began to take hold. Still, her path to culinary achievement was never linear. Rather, she kept one foot in nine-to-five office work with food as a persistent side-hustle: “I was always cultivating two careers,” she recalls. Even as Kiki was parsing out what her career would be, one thing remained consistent: “I’ve always found myself being in a profession where service was at the forefront of what I did… I really wanted to find ways to, not only help others, but support them and be a vessel for the good things in life.”

After earning her degree in Political Science at University of Michigan (Ann Arbor), Kiki moved to New York and started working in fundraising for non-profit organizations. Her culinary and professional stars aligned when she took a job coordinating a Farmers’ Market in Brooklyn. Kiki was intrigued by the sense of community that she witnessed in the Farmers’ Market, as well as the cultivation and preparation of produce and meals. Her experience at the Farmers’ Market compelled her to seek out a career in food.

First, Kiki moved to Chicago and put herself through culinary school at Le Cordon Bleu. She held every position you could hold at various noteworthy kitchens throughout the city. However, her favorite of these positions was with avec, a Chicago staple run by multiple James Beard Award-winning chef, Paul Kahan. While Kiki found her work fulfilling, she had always intended to work for herself. Where better to start a business than her native Detroit?

BACK TO THE D

Kiki moved back to Detroit in 2014, married her husband, and eventually purchased her childhood home in Rosedale Park. Not long after this, she opened FOLK and The Farmers’ Hand. In addition to owning and operating these establishments, Kiki is Managing Partner of Nest Egg Detroit LLC—a women-led hospitality group. And she is Block Captain for Glastonbury between Fenkell and Chalfonte in Rosedale Park, with Detroit credentials to pair with her business acumen.

As Economic Development Manager for GRDC, Kiki aims to expand GRDC’s commercial development initiatives and promote the Grand River commercial corridor. She sees the Grand River WorkPlace as a collaborative ecosystem that facilitates the sharing of ideas and the combining of resources. She wants the WorkPlace to maintain a “robust events calendar, encouraging members to share their expertise and grow their networks.” Furthermore, Kiki sees the Northwest Detroit Farmers’ Market as an important community event that convenes the five neighborhoods—Grandmont, Grandmont #1, North Rosedale Park, Rosedale Park, and Minock Park. She believes the Farmers’ Market is an educational space in which families can learn about produce—where it comes from, how it is implemented in the products on offer, and its economic and nutritional value.

Kiki has many ideas that will be critical to the growth and development of the Grandmont Rosedale community and the Grand River corridor. If you’d like to speak with Kiki directly, email her at kiki@grandmontrosedale.com or call (313) 387-4732 ext. 116.