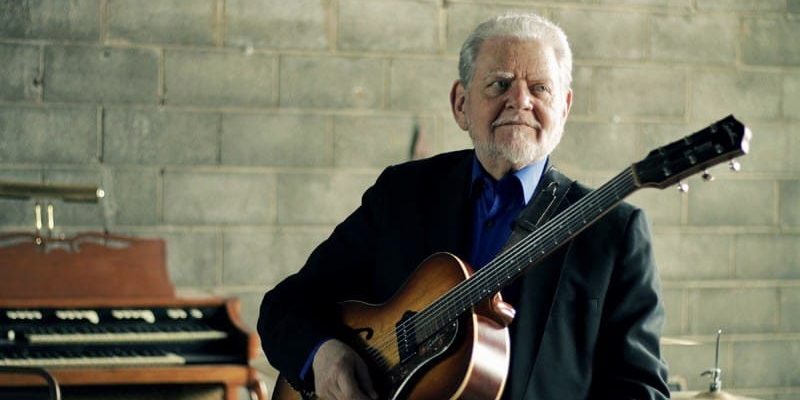 Jazz guitarist Ron English, composer and pianist Michael Malis, bassist Jaribu Shahid, and Tariq Gardner, drummer will be performing two long sets on Thursday, August 5, at the Northwest Detroit Farmers’ Market, 18445 Scarsdale. The first set will start about 4:30 pm, and the other at 6 or 6:30 pm. Ron and Michael live in Grandmont Rosedale, and the others are also west siders. “It’ll be a short drive for all of us,” says Ron. Just how Ron came to perform at our Farmers’ Market is a story that starts a few decades ago, and it’s a story about perseverance, connections, and most of all a love of music – all kinds of music.

Originally from Lansing, Ron’s earliest connection to Detroit came in the 1960s with his involvement in the Detroit Artist Workshop. This artist-run collective started in 1964 and had a gallery space in a house in the Cass Corridor for performances and for artists to showcase their work. Jazz musicians involved with the Workshop were creating new music and creating new places to play it. About that time, at a party, Ron was at a party and he heard a totally different kind of music. “It was artistic and engaging, and new. And I thought ‘uh oh. This is not what I do.’” Despite the rock scene growing around him, in national media, in clubs, on campuses, Ron and others got in as much creative jazz as they could, quickly learning that they would have to work to create their own audience and, young and old alike, adapt to the new circumstances. Ron recalls in early 70s recording with older bebop trumpeter Willie Wells “in the back room of a record shop on Wyoming, covering bossa nova and swing tunes. Things looked grim for Jazz, but we still had hope.” Musicians were creating their own record companies as well as performance venues, and Ron recorded with organist Lyman Woodard in the Strata Concert Gallery, for the Strata Record Label.

Not long after that, Ron was invited by saxophonist and ethnomusicologist Doc Holladay to join the adjunct faculty at Oakland University, where Holladay was establishing a jazz program. This connection “was a great blessing to me,” says Ron. He taught at OU until 1981.

Ron did not study music in college, but instead earned a BA in philosophy and a MA in comparative literature, which, if you think about it, may not be too far off from the broad exploration of music that is jazz. Being a musician in Detroit lent itself to this versatility. The 1980s were “a tricky time” for many musicians. According to Ron, Detroit has always been a place where musicians are asked “to play all kinds of music. Not like in New York City where you establish your style and that’s what you do. Jazz musicians in Detroit are at home in a pit reading music, working Broadway shows, playing at church services, improvising, and sitting in with a blues band. We listen to one another and we play.” There’s a cautionary tale about two horn players who played a Broadway show in New York City for decades. Once the show ended, the musicians found out they couldn’t read music, had stopped listening to the other musicians, and that they couldn’t play anything else. “We don’t have to worry about that in Detroit,” says Ron. “Within jazz there are challenges all the time.” Ron went on tour with Supremes singer Mary Wilson for a year through Europe and the Middle East. He toured with Martha Reeves of the Vandellas too, all along the East coast. However, by this time Ron was married and had a son. When he left for the tour of the East coast, Ron left his wife and baby in the middle of a blizzard. After that he decided, “no more touring.”

When their first baby was on the way, Ron and his wife Demetrye agreed that they needed something bigger than the four room apartment they were living in in Cass Corridor. They looked at a lot of houses, but they chose Grandmont Rosedale because they could afford it, and they liked the neighborhood. They moved in on December 17, 1977 and decorated a Christmas tree before they had unpacked. “There were boxes everywhere, but there was a tree, all decorated.” Their son Derek (owner of Faust Haus Roasting Company – a Northwest Detroit Famers’ Market favorite), was born soon after they moved in. Ron and Demetrye met at a concert where they had performed together. Demetrye was singing with a Women’s Chorale and Ron was part of the accompanying band. As Ron recalls, “Demetrye stepped out of the choir line with her long hair and bright eyes to thank us for accompanying the choir. ‘It was a real pleasure,’ she told us. ‘Uh…uh’ was all that me another of the guys could say. And then she was gone. I was so struck by her.” They didn’t meet again until two or three years later when Ron had another opportunity to come up with some livelier conversation. After marriage, moving and two babies, living in Grandmont Rosedale has worked out well. Son Derek lives in the neighborhood too (as do a couple of grandkids), and Ron continues to be a busy Detroit musician.

Ron has played the Montreaux-Detroit Jazz Festival, on and off, since the festival started in 1980. He plays with gospel singers every now and then, he’s recorded a couple of CDs and has been featured on others, and he’s got a standing gig on Tuesday nights at the Dirty Dog Jazz Café with a sizable band. Over the years, Ron has also worked as an English teacher at Eastern Michigan University, and worked as a legal assistant. He briefly taught jazz guitar at Michigan State University, and teaches a jazz history class at Wayne County Community College District. Ron still teaches beginning and advanced guitar at WCCCD. He’s got a studio at Marygrove where he teaches a few students who have been with him for nearly 20 years. “It’s a big city,” Ron says. “There are more people in music than you might think in Detroit.”

While the venue, style, and fellow musicians change, Ron’s enthusiasm for playing music has not lessened. “It’s an exciting time, to see generation after generation come up and to be able to make music with them is wonderful! Guys in their 30s and 40s are exploring the nearly forgotten music and musicians. There’s just so much to hear.” Between gigs, you might catch Ron helping his son Derek out at the Northwest Detroit Farmers’ Market. “I mostly just carry stuff in and out of the Market,” says Ron.

You just never know who your neighbor might be. You could be living down the block from one of Detroit’s jazz legends. Not long ago, composer and pianist Michael Malis was out for a walk in his new neighborhood, Grandmont Rosedale, and he saw Ron standing in front of Derek’s house. Michael knew exactly who Ron was. The two, along with Jaribu Shahid, and Tariq Gardner will be performing free at this week’s Northwest Detroit Farmers’ Market. Stop by and enjoy the music from some of the best jazz musicians in Detroit.

The Northwest Detroit Farmers’ Market is every Thursday through mid-October from 4 – 8 pm in the parking lot of the North Rosedale Park Community House, 18445 Scarsdale.