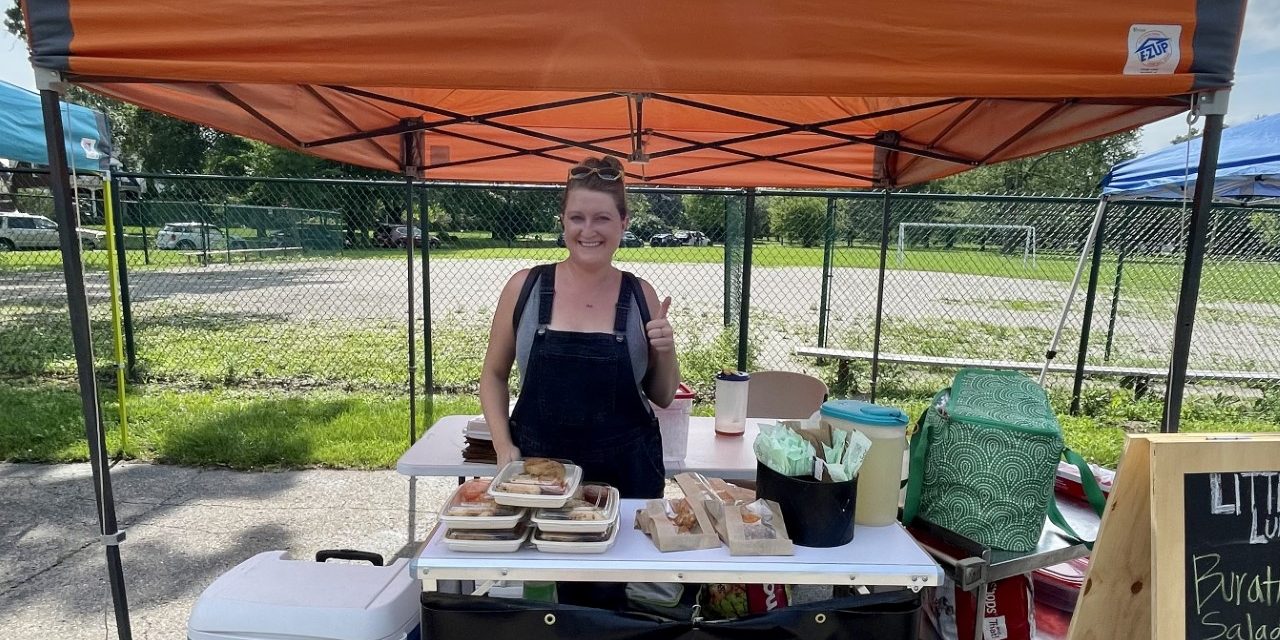 Icyphine, or Icy, was a farmer’s wife from Indiana who moved to Michigan’s thumb in the 1920s, and who loved to cook three times a day for everyone who worked on the farm. When Ashley Hughes was about nine, her family noticed her resemblance to her great grandmother Icy, and so “Little Icy” stuck. Ashley also inherited her great grandmother’s love of cooking. Ashley’s father’s parents  owned Caboose, a restaurant and bar in Detroit, and later opened a resort in Lexington, Michigan – hence Ashley’s lifelong familiarity with the hospitality business. Food, hospitality, and family are all one to Ashley, so it’s no surprise that she found the first home for her business, Little Icy’s Luncheonette, at the Northwest Detroit Farmers’ Market this season. Ashley’s path to the Market was a varied one, however, with many stops along the way. Her years of experience serving food and providing great hospitality in many venues, to many kinds of people taught her what worked, what didn’t, and how she’d like her own business to look – if only she could find the time to get it up and running.

Ashley entered the hospitality industry when she was 16, and soon found that not only did she enjoy the work, she was good at it. She quickly became a supervisor at a restaurant when she was still in high school, then helped out her dad, uncle, and aunt at their beach house hotel, where she became a vital part of the business. She studied hospitality at Madonna University and culinary arts at Macomb Community College. Ashley completed the Management Association Program at MGM casino, and oversaw the opening of three Wolfgang Puck restaurants. She’s also been in managerial positions at a golf club and the  Royal Park Hotel. The hospitality/restaurant business is demanding without a lot of holidays off, but Ashley managed to squeeze in a trip to visit her sister in New York City. Ashely’s visit turned into a longer stay as she began working for a Christmas cookie start-up, and then another start-up that specialized in holistic food and facial remedies at a vegan foods and spa business.

When she returned to Michigan, Ashley jumped back into the hospitality industry by managing and organizing events with Continental Services, in collaboration with the Detroit Port Authority, for yacht charters that cruise up and down the Detroit River. She was promoted to catering for the company and began work as the director of food at beverages at the Michigan Opera Theatre, the Ford Estate, Waterview Lofts, a venue in Lathrup Village, and the PGA Tour. Ashley was promoted again to be the director of beverages for all of Continental Services’ events and venues. Ashley was busier than she had ever been. And then COVID-19 hit. Ashley was out of a job within a month.

CHOOSING GRANDMONT ROSEDALE AS THE HOME FOR HER BUSINESS

“All that time, in the back of my head, I was thinking of doing by own thing,” says Ashley. COVID-19 effected many people in many different ways. For Ashley, COVID-19 allowed her to slow down and take a chance. Inspired by generations of family cooking and hospitality, Ashley thought it was time she started her own business. First, she needed a place to cook and an audience to cook for. She did some nearly literal, hands-on research: she drove across country to Boise, Portland, and New Orleans, looking for a place to open up. “I could have gone anywhere,” says Ashley. She chose Grandmont Rosedale. The commercial kitchen at the North Rosedale Park Community House offered a place to cook and develop “without an enormous investment of time or resources.” Through the Community House, Ashley learned about the Northwest Detroit Farmers’ Market, which is every Thursday from 4 – 8, June – October, in the parking lot of the Community House. Ashley set up Little Icy’s Luncheonette on Opening Day of the Market, and has been there every week since. “It’s so pretty here,” she says. “I love the community. I think we’re meshing well. We work well together  – both the GRDC staff who set up the Market and the customers.” News of Ashley’s delicious offerings has made its way through the neighborhood and she already has several return customers who look forward to her loaded mac and cheese, cobb salad, brunch burrito, and almond joy cookies. Her menu varies some, and she also pops up at other events like GRDC’s Movie in the Park! in Minock Park, and at the DSO concert at the Community House. “There’ something special about Detroit,” Ashley says. “I could have gone anywhere, and I may be on the road again, but for right now, I’m here.”

Little Icy’s Luncheonette is open Thursdays from 4 – 8 pm at the Northwest Detroit Farmers’ Market for walk-up orders only. Advance online orders are also accepted. Ashley does pop-ups and small events. To learn more about Little Icy’s Luncheonette, and to order your next favorite dish, go to https://littleicysdetroit.com/ or stop by the Northwest Detroit Farmers’ Market, Thursdays from 4 – 8 pm, 18445 Scarsdale.

You can direct your questions to Ashley: hello@littleicysdetroit.com or 586.382.1655.