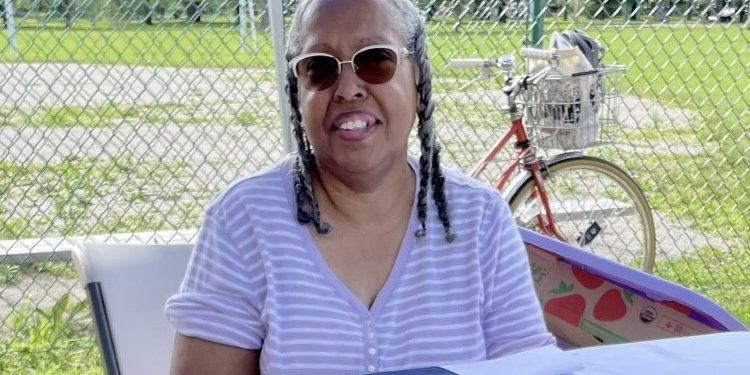 When friends and family urged Patrice Davis, “You should sell these, they are delicious!” Patrice did not have being a farmers’ market vendor in mind. Patrice knew her baked goods were delicious. After all, her goal was to bake butter pound cakes like her Aunt Amy. Patrice experimented a while, tweaked the recipe, and although Aunt Amy was no longer around to give it her final okay, Patrice’s Aunt Shirley tasted the pound cake and approved.

FALLING IN LOVE WITH THE NORTHWEST DETROIT FARMERS’ MARKET

Patrice came to baking pound cakes after a career teaching special education in the Detroit Public Schools. She thought baking could supplement her income once she retired. She was not wrong, but she didn’t foresee becoming a favorite at the Northwest Detroit Farmers’ Market, and she certainly didn’t foresee that she’d enjoy it as much as she does. “I was very reluctant to be a part of a farmer’s market. I didn’t want to be bound to it, but I have fallen in love with that market!” For two years now, Patrice looks forward to selling her pound cakes at GRDC’s Northwest Detroit Farmers’ Market because she loves “meeting the customers, and the atmosphere. It’s outdoors, which I love, and the other vendors and the Market workers are so friendly, and I love the fact that everything is ready – the table, tent chairs – when I get there.”

Patrice began her business hoping to become a wholesaler to coffee shops and restaurants. She took the FoodLab training, learned a great deal from Good Cakes and Bakes owner April Anderson, earned a ServSafe certification, and found the Brightmoor Artisans Collective Commercial Kitchen where she bakes. Patrice’s dream is to one day have her own commercial kitchen to bake her own goods and to rent out to others makers, “to help other entrepreneurs.”

Patrice has begun selling her pound cakes wholesale. They are available at Detroit Sip, 7420 W. McNichols, and they will also be at the new Meijer’s Rivertown Market on Jefferson which is scheduled to open in September. She offers a variety of pound cakes. Her signature cake is the lemon pound cake with lemon glaze. This is also her favorite. “It’s all in that lemon glaze that Aunt Amy never got to taste.” Butter pound cake is of course the classic. Patrice uses premium butter, no preservatives. She sells whole cakes as well as the mini cakes you see at the Market. Patrice regularly bakes three kinds of pound cakes: butter, lemon, and butter pecan. Her husband’s favorite is the butter pecan. On special occasions, Patrice will make a red velvet pound cake, her younger son’s favorite. Her older son has been a great help with the process of becoming an entrepreneur. To transition from baking for friends and family to baking for restaurants, coffee shops, and farmers’ markets involves creating a business plan, developing a method for transporting goods, creating a schedule, marketing, and more.

For now, Patrice spends one day a week in the kitchen baking. With new customers coming, she figures that will mean another day in the kitchen. Patrice is always researching and experimenting, so new flavors may be coming. ”I love sweets and I’m always checking out other people’s sweets.” She is a self-taught baker who learned early on that nothing beats the taste of homemade. She grew up eating and then bringing homemade sweets to Sunday family dinners at her grandmother’s house, and so, as far as pound cakes go (and as it’s printed on her sign at the Northwest Detroit Farmers’ Market), there’s “Nothing like Grannies!”

Whole cakes can be ordered at 313.516.6971, or email Patrice at granniespoundcakes@gmail.com.

The Northwest Detroit Farmers’ Market is every Thursday from 4 – 8 pm through mid-October in the parking lot of the North Rosedale Park Community House, 18445 Scarsdale. For questions about the Market, contact nwdfm@grandmontrosedale.com.

Stay in touch with the Northwest Detroit Farmers’ Market via social media: https://www.facebook.com/nwdetroitfarmersmarket/ 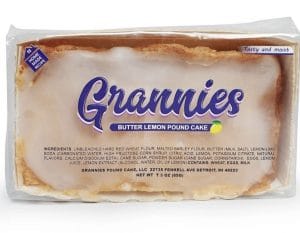