One of the best known features of Grandmont Rosedale is our beautiful, historic homes. Brick and stone, leaded glasses windows and stained glass windows are common features, and the architecture is as varied as it is beautiful. It’s hard to find two homes that are alike. It’s guaranteed that you won’t find another home that’s just like Rick and Angel Young’s home. Or, more accurately, there isn’t a backyard quite like theirs. Lush gardens surround a pond where several lazy, brilliant koi swim, and a waterfall cleverly made from an old trumpet flows. There are several carefully planned porch levels add an inviting architecture to the yard, there’s a fire pit a couple of grills, and a gazebo-like structure that is nestled beneath a beautiful mature blue spruce. The height of the spruce draws attention upward to what makes this yard unlike any other in Grandmont Rosedale: sitting at the end of a flight of stairs is a treehouse. This isn’t a few planks of wood nailed together by a couple of ambitious kids though. This four walls, roof, door, four-season (no joke – there’s heat), windowed (with two leaded glass windows) treehouse has a couch, chairs, a 40” flat screen TV, a turn table, CD player, a cassette player, and an electric guitar hanging out in the corner if you’re so inclined. Album covers focusing on Motown and funk cover the ceiling, a string of lights circle an old steel guitar that is mounted on a wall and the large trunk of the spruce that rises through the middle.

A HOME IN GRANDMONT ROSEDALE

The builder of what just might be the world’s coolest tree house is Rick Young. Rick and his wife Angel have lived in Grandmont Rosedale for about 13 years. When they first moved in, the backyard was an overgrown, neglected yard of no particular interest. Rick didn’t spend much time lamenting the state of his yard, instead he went to work. He knew he “had to get the yard together.” As one of 12 kids growing up in Clinton Township where “it was all trees,” Rick spent a lot of time as a kid building treehouses – six of them in fact. The treehouse in his yard today started as a raised deck, but just like the trees around him, his vision of what that deck could be grew. The deck became decks with room left over for a pond, a fire pit, a place to grill, and then, of course the tree house. Rick planned each phase carefully, knowing that it was more about seeing what the yard had to offer than forcing his own vision. It certainly helped that Rick has had just about a lifetime of improvising, of listening, and of adjusting to circumstances.

Rick also spent a lot of time playing a lot of different instruments as a kid. At the younger end of his 11 siblings, Rick “inherited whatever instrument a sibling would leave behind when they moved out.” Rick started out in 5th grade playing the trumpet, but eventually also learned guitar, keys, drums, and bass. Rick brought his love of music with him when he moved to Grandmont Rosedale, having jam sessions with friends in his backyard. Several neighbors on either side of Rick and Angel purposefully have open backyards without fences, which sort of enlarges Rick and Angel’s back yard for summer gatherings. When someone new moves on to their block, Rick often is one of the first to welcome them and to ask if they like music. “If you can hear the music, you’re invited to stop in.” This summer Rick and Angel hosted “Jazz After Dark in Rosedale Park,” a concert series with several local musicians, most of them friends.

FROM THE BACKSTAGE TO THE STAGE

Rick’s favorite subject in school was math, particularly spatial understanding and so it’s not a surprise that he became a construction electrician. He uses this skill when he designed his yard and when he works on home renovations, church renovations, and when he built porches, ponds, and treehouses for others. He calls this business Man Around the House (MATH). Rick also put this skills to work as construction electrician and as a grip working on the electrical and set construction with the WCCCD theater department. Working on sets, Rick developed an interest in giving it a go as an actor. Rick has been in plays at the Detroit Repertory Theater at the Northwest Activities Center.

Rick also has some pretty great ideas for a podcast called On the Spot where he preps, cooks, and cleans up meals in 30 minutes or less. “My mom taught me how to cook because I was a picky eater.” That’s one pretty smart mom. Just like playing music, Rick sees cooking as “social, it’s about community.” He’s thinking of adding social and political commentary to the podcast as he cooks.

Clearly Rick is not one for being idle. Whether he’s building a treehouse, playing music with friends, organizing a neighborhood concert, helping with set construction, or cooking a meal, what drives Rick is people, is community. “People make the world go round,” he says. “I value people over things. I can brag about how many people I’ve known, not my things.” Rick’s yard, various decks, gazebo, and treehouse all invite curiosity, exploration, and with enough chairs and benches to seat 30. Neighbors, friends, and family frequently gather to play music together, to watch movies, to eat, and to celebrate what makes a yard and a neighborhood great. If you’re interested in a tree house of your own, let Rick know at universalupscale313@gmail.com or 313.215.7442. 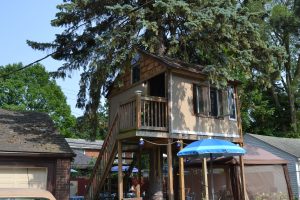 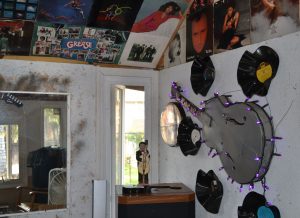 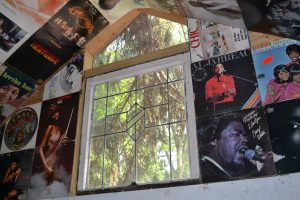 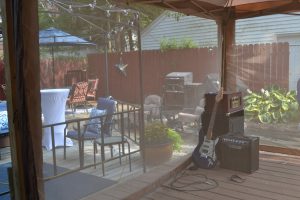 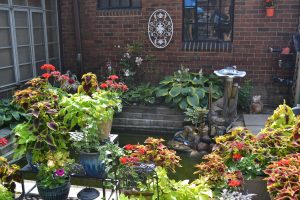 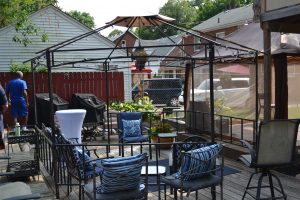