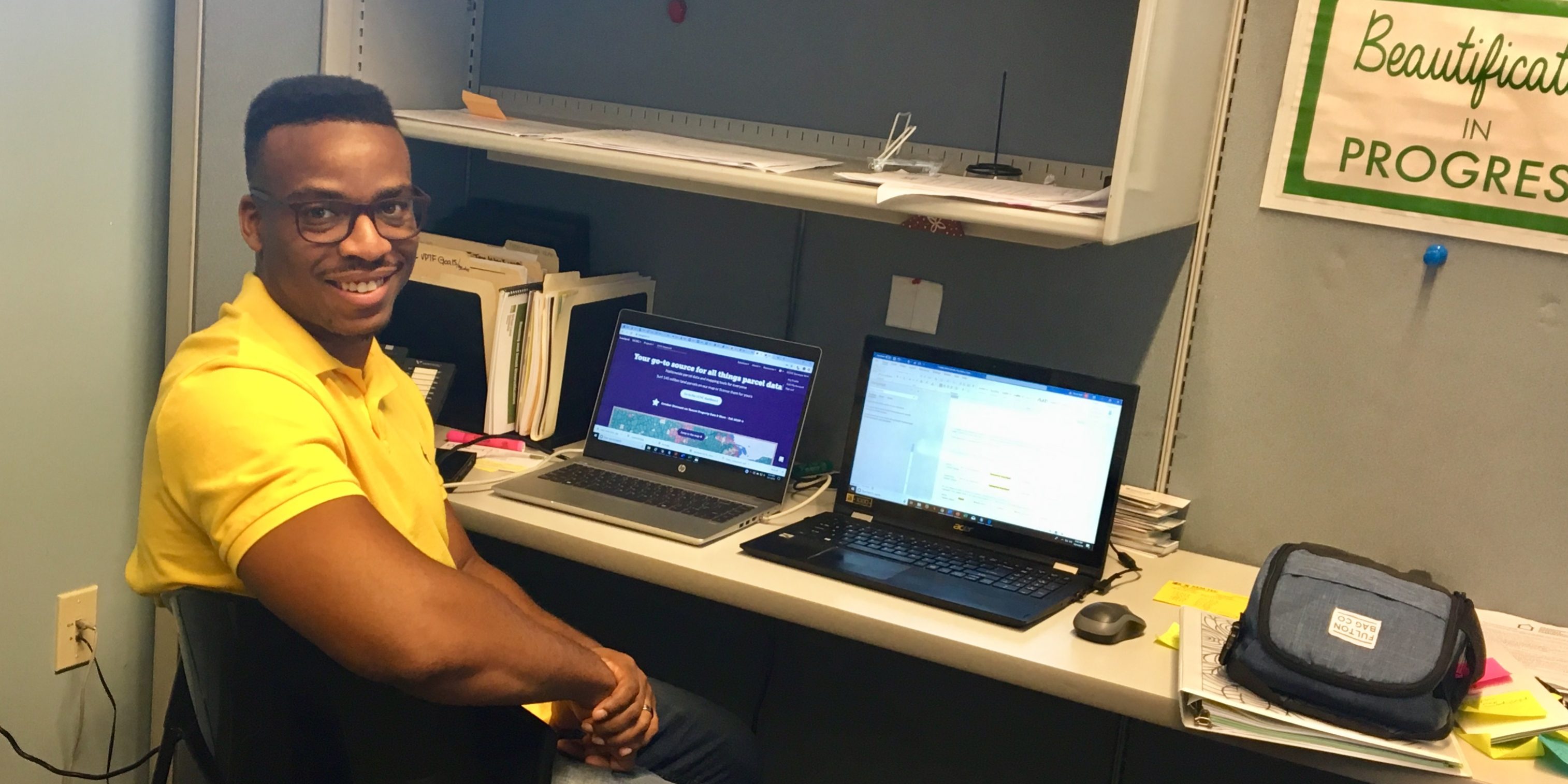 Over its 30 year history, GRDC has had some amazing AmeriCorps VISTAs (sort of like domestic Peace Corps workers), who have pitched in, worked hard, learned a lot, taught a lot, and then took their experience at GRDC with them to their next adventures. Some have even become staff members at GRDC. Our AmeriCorps VISTAs have come equipped with a wide variety of experiences, but Kevin Ball, GRDC’s current AmeriCorps Vista Volunteer Coordinator, is the first to come to GRDC with a doctorate degree in hand. His path from growing up on the East side of Detroit to working at GRDC has been pretty interesting.

While Kevin was in undergrad at Wayne State University majoring in English, he was also working full-time in traffic control and maintenance at the Ambassador Bridge. It was a “pretty dangerous” job, so the focus on literature and writing was a nice contrast. When he was nearly done with his BA in English, a professor suggested that Kevin take a film class, thinking Kevin would enjoy it. Kevin already had an interest in film through music, and was even in a hip hop band that sampled old film soundtracks, Blaxploitation films in particular. Kevin took the class and was hooked. Graduate school in Film and Media Studies was next.

GETTING CONNECTED WITH THE GRANDMONT ROSEDALE COMMUNITY

Working on a dissertation is a solitary activity. Until pretty recently most of Kevin’s days involved writing, researching, looking after his two children, spending what time he could with his wife, and looking for work. Kevin enjoys working one-on-one with undergraduate students on their ideas and their writing, but found this wasn’t possible in a traditional classroom so he broadened his job search. The first bit of information about Grandmont Rosedale came from his mother who told him “They have a Detroit Vegan Soul there and a Community Garden. It’s very inviting!” Kevin, of course, began his own research and was immediately impressed with “how many different plates are spinning at GRDC.” Once hired Kevin “didn’t know what to expect,” so, just as he was finishing up his PhD, he continued his research on GRDC with a “stack of reading on the farmers’ market, beautification, renovation, the commercial corridor, and the business incubator.”

Kevin defended his dissertation in Film and Media Studies at Wayne State University on August 16 and began working at GRDC on August 19. Kevin’s dissertation Sonic Motion and Heaviness in Black Media looks at “themes of levitation and flight in music videos.” This might seem to be at quite a distance from GRDC’s focus, but Kevin doesn’t see it that way. Kevin spent a good deal of his research and writing on the cultural studies and social justice issues evident in the films and videos he studied, and “working at GRDC is commensurate with that.”

Since coming to GRDC, Kevin has familiarized himself with the Grandmont Rosedale community through a variety of events. In fact it is one of Kevin’s tasks to invite volunteers to lend a hand and to keep a careful record of who volunteers for what and when. This focus offers quite a different shape to his days. “It has been a learning experience, for sure,” says Kevin. “I appreciate the electricity of improvisation and strategies – the community-forward approach. Things are dynamic here. I can appreciate that.” In just a couple of months, Kevin has already worked on several projects such as the Neighborhood Safety Meeting, the Northwest Detroit Farmers’ Market, the Grandmont Rosedale SOUP, and the Placemaking Project on Grandville. Kevin keeps our volunteer lists up to date, he complies the weekly eblast, and he is working on some blog posts. “I came in with a laser-focused approach to work,” Kevin says. “I’ve had to learn to work differently – horizontally – to do lots of different kinds of work.” GRDC is indeed a busy place, and Kevin’s help is needed as much as it is appreciated. Kevin’s schedule also includes teaching courses in Cinema Studies at Oakland University, so clearly Kevin knows a thing or two about staying busy.

Kevin will be at GRDC until next August. If you see Kevin, introduce yourself. Welcome him to our neighborhood. You might ask him about film or music or his plans for what’s next in his busy, interesting life.