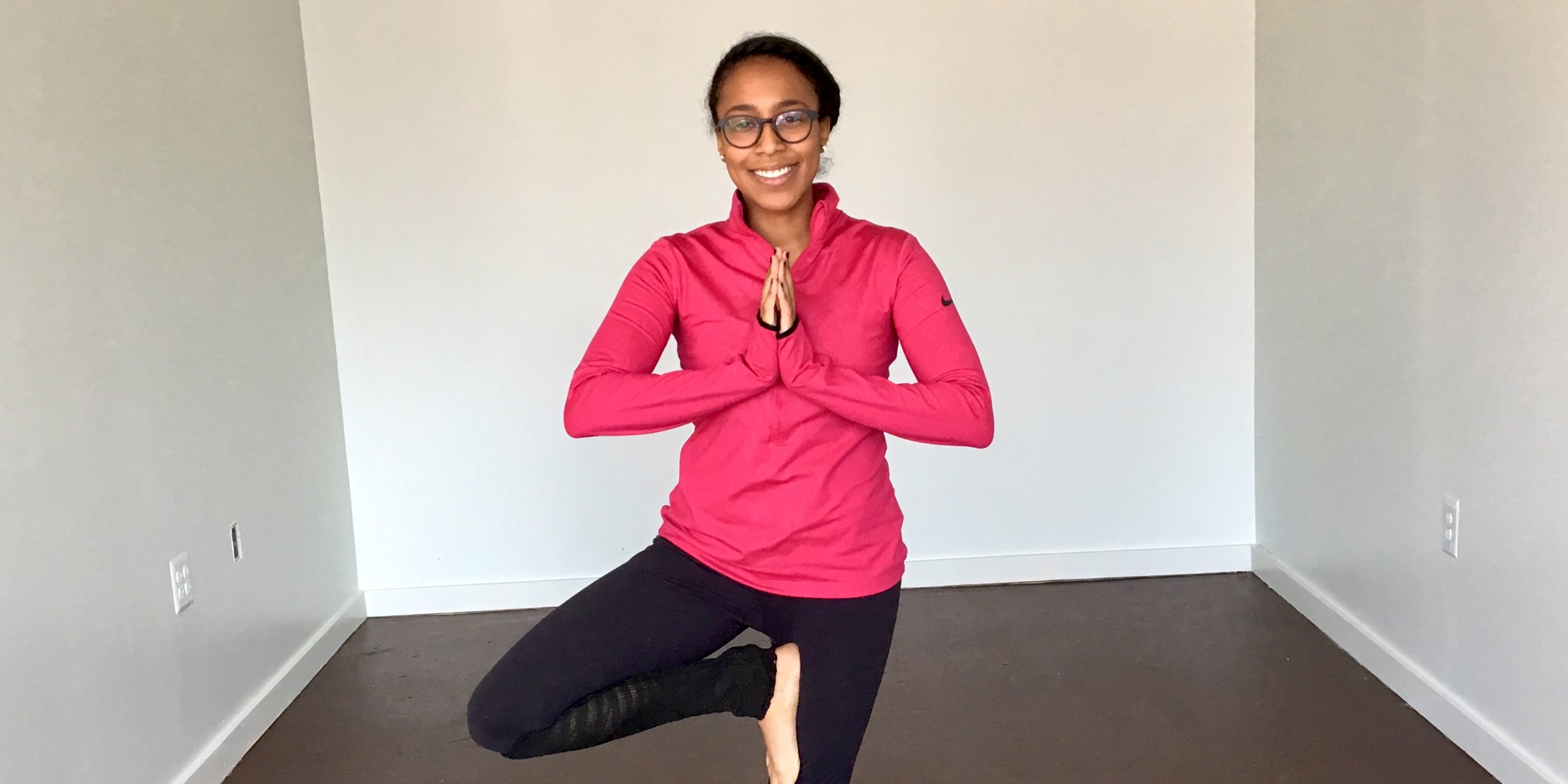 Yoga didn’t do much for Kerrie Trahan back in 2005 when she tried her first yoga class. She sort of stumbled upon the class as she was checking out what was offered at the Boll Family YMCA downtown. Her dad had signed the whole family up at the Y because, as Kerrie remembers, “he thought we all needed to lose weight.” Kerrie ran cross-country in high school so she was no stranger to physical fitness or exercise, but, at least at this point, she didn’t think yoga was for her.

Though she didn’t know it at the time, this first yoga class would eventually prove to be very important. Kerrie’s father was killed fairly soon after signing his family up for the Y membership, and for quite some time afterward Kerrie felt lost. Grieving, Kerrie turned to drugs and alcohol to ease the pain, but neither was the solution. She had a friend who was teaching English in South Korea, so Kerrie thought moving far from home might help. Her grief only got worse. In fact, being so far from home left her homesick, experiencing culture shock, and still deeply grieving her father. A Google search for some way to ease her pain, led Kerrie to a yoga class near where she lived in Korea. Unlike so much else in her life, according to Kerrie, “the yoga class was quiet and it quieted me.” She started going once a week. Kerrie believes she was “the worst in the class. I was completely inflexible and I couldn’t focus, but something was working.” She kept going. With every class she felt a little better. Having a regular yoga practice helped Kerrie not just with her homesickness, but with her grief as well.

On a break from her teaching in Korea, Kerrie went to Thailand to a yoga and detox retreat. That experience convinced Kerrie that “yoga was it.” The focus and stillness yoga offered proved invaluable to every aspect of Kerrie’s life. Her physical health improved, as much of yoga involves strength and stretching. The intentional movement and focus helped Kerrie with her grief. When Kerrie returned home to Detroit, she needed no more convincing and began a regular practice of yoga. Kerrie wanted to share the benefits of yoga with family and friends, and so enrolled to become a Certified Yoga Instructor. While teaching, Kerrie started her own studio, Yoganic Flow. It wasn’t enough to simply teach family and friends who were familiar with yoga, however. Kerrie was committed to bringing yoga to Detroit’s neighborhoods, to people who, like she was, were skeptical of or less familiar with yoga, so that they too could benefit from its healthy and healing effects.

Yoganic Flow is a team of six instructors, including Kerrie. The instructors are male, female, a senior, people who came to yoga late in their lives, and people for whom yoga has been a lifelong practice. The Yoganic Flow instructors teach classes in neighborhoods all over the city. They teach at several Detroit rec centers, (where for the cost of membership the classes are free!), in Lafayette Greens, Palmer Park, and as of March 24, at the Grand River WorkPlace pop-up space at 19120 Grand River. Yoganic Flow won a Motor City Match award and received resources to find this spot in Grandmont Rosedale. Kerrie sees their time at the Grand River WorkPlace as an opportunity to test the business plan and a chance to get to know the Grandmont Rosedale neighborhood. GRDC’s Grand River WorkPlace Manager Larissa Carr and Construction and Facilities Manager Tom Ridgway have been, according to Kerrie, “incredibly responsive and patient” with Kerrie’s many questions about the community and her ideas for the space.

Yoganic Flow offers classes daily at several different times. Kerrie welcomes “every body, ages 6 – 86” and every level of experience. Yoganic Flow also offers private and public yoga events in many locations. Often a bit of fun is added to a yoga class, such as hip hop yoga or glow in the dark rhythmic yoga or wine tasting and yoga. Clearly Kerrie believes that yoga is as versatile as it is beneficial. In short, Kerrie wants to share what has become so valuable to her. She remembers how it took her a few tries before she found the benefits of yoga, and she had to be brought pretty low to even give it a fair shot. She’d like to share the health, both physical and mental, that she has found in yoga with a community who does not have easy access to yoga classes. “We go where we are needed and wanted,” says Kerrie. “So we are in the neighborhoods of Detroit, for people who, like me, need yoga.”

To learn the times and costs of yoga classes and to find out a bit more about all the instructors, visit yoganicflow.com. You can also follow Yoganic Flow on Facebook, or send Kerrie an email with your questions to yoganicflow@gmail.com. The practice of yoga, most estimate, is about 5000 years old. The instructors at Yoganic Flow just might be on to something…