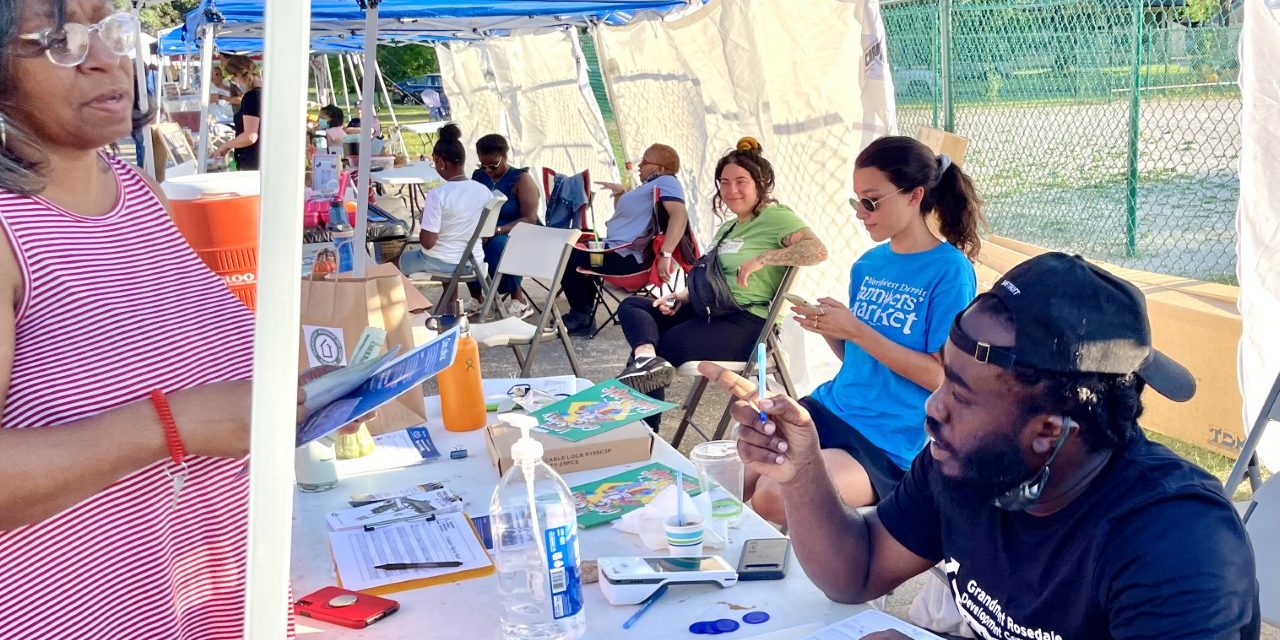 John’s introduction to outdoor Detroit produce markets started not as a shopper or a vendor. John’s dad was in charge of security at Eastern Market, and about seven years ago, the security department was looking for some more workers. John figured, “Why not? It’s a job, right?” Over time, John came to love Eastern Market. “I love the aesthetic, the vibe, and how I’ve grown into it.” John’s dad no longer works at Eastern Market, but John has stayed on, although he no longer works security. John became a Market Operations Analyst. He assigns vendor locations, helps vendors set up, and submits invoices, among other tasks. This position is a better fit for John, as he is “naturally a people person. I love watching the small businesses grow. I love to help them with that process.”

The influence of the Market didn’t just inspire a job change for John, it also pointed him in a healthier direction. “I hit a certain age and realized I couldn’t just eat whatever anymore,” he says. “It’s expensive to eat out, no matter where,” so John looked back to what he already knew about cooking, and saw his consistent proximity to good, healthy food as the perfect motivation. “I raised by a bunch of women who were from the South. They told me, ‘You are going to learn to cook. At some point, there will be no one to cook for you anymore.’” John’s go-to meal is roasted potatoes, baked chicken, and Brussel sprouts. John does the vast majority of his shopping at Eastern Market and has developed relationships with many of the vendors, so he has a favorite place to get chicken, and knows where to get harder to find items such as boneless lamb shoulder and baby goat.

When not at work, John tends his patio garden in Woodbridge that features peppers, herbs, flowers, and loofah. John also rides his bike to work. A ride from Woodbridge to Eastern Market is not such a long trek, but John also rides his bike to Grandmont Rosedale Development Corporation to work as the 2021 Northwest Detroit Farmers’ Market Manager. That’s pretty impressive, although John doesn’t think so: “I’m always on my bike. It’s a straight shot up Grand River. No problem.” A graduate from Specs Howard School of Media Arts with a degree in graphic design, John is also working on creating his own graphic design business, Seven Whales Design. He uses the name Seven Whales as his DJ name as well. In a way, John’s interests and talents all draw on his ability to engage with people. Working at Eastern Market, creating compelling graphics, and putting together a night of great music all point to “creating a good vibe, finding out how to draw people. That’s my therapy and my passion.”

This people-focused mindset, and his experience at Eastern Market make John the perfect Market Manager for our Northwest Detroit Farmers’ Market. But, as John knows, our Market is not Eastern Market. Pretty quickly John noticed that the Northwest Detroit Farmers’ Market is “intimate. It’s more personal and community-based. There’s depth here. Everybody knows everybody. It’s like the village that everyone talks about: ‘It takes a village.’ This is the village.”

The Northwest Detroit Farmers’ Market is open every Thursday from 4 – 8 pm in the parking lot of the North Rosedale Park Community House, 18445 Scarsdale, through mid-October. Every first Thursday of the month is also a Shop Small Market that includes local small businesses as well as our usual wonderful vendors. When you come to the Market, stop by the welcome table and introduce yourself to John. He’d be happy to meet you.