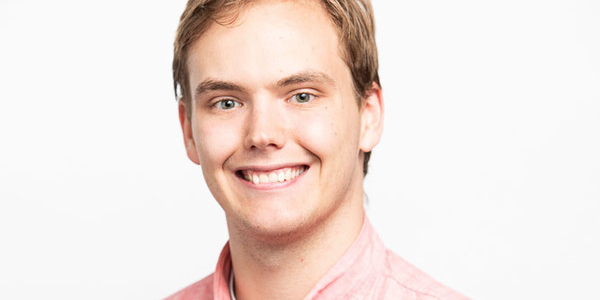 Michael Stypa grew up in Onekama, Michigan—a small town near Lake Michigan that is roughly 250 miles from Detroit. Before coming to GRDC as an intern in September 2019, Michael had only known Detroit through the (admittedly biased) stories he’d heard back home and a few visits to the city with friends from University of Michigan. He recognizes, however, that there is a difference between knowing Detroit as a city and knowing it as a community. That difference is revealed in people, their traditions and aspirations.

Reflecting on his time in the Grandmont Rosedale community so far, Michael says he feels lucky: “I knew college students who lived in Detroit, but I’d never met anyone who owned a house or a business here. I’m so lucky to be able to interact with the people of this community through my work with GRDC.” You may have seen Michael at the Farmers’ Market, the Community Connections Breakfast, and other local events this fall. He’s a very friendly and sociable person which, as we know, is a welcome trait in Grandmont Rosedale.

From UM to GR

Michael has a bachelor’s degree in Civil Engineering with a minor in Community Action and Social Change from University of Michigan. He’s continuing his education there, working on a master’s in Social Work as well as Construction Engineering and Management. Given GRDC’s transformative work in home renovation and commercial development, it’s easy to see what Michael brings to GRDC and what brought him here. But there’s more to it than that. “I definitely stayed in my comfort zone by coming to an organization that does this work, which isn’t a bad thing,” he says. “But being here gets me involved in the community, much more than if I’d stuck to the traditional engineering path.” While many engineers narrowly focus on their projects, leaving community interaction to other people in their organizations, Michael wants to build a career that highlights the social impact of construction.

Michael worked as a server in a restaurant for two years—a job he remembers fondly. He also interned for two summers with DPR Construction. That first summer, he was involved in small renovations on a hospital. The following summer was centered on a “mega-project”: the construction of a new hospital building from the ground up. He draws on that experience to assist GRDC in its construction efforts by researching potential co-developers and optimizing internal processes and schedules.

Outside of work, Michael likes video games (Mass Effect, Fallout, and Assassin’s Creed, to name a few). He’s also a sneakerhead with a passion for basketball shoes, especially Jordans. So far, his favorite restaurants in Grandmont Rosedale have been Panda Chinese Restaurant and Detroit Vegan Soul.

If you’d like to talk to Michael about “built environments,” socially conscious engineering, or Jordan 3s, email him at mstypa@umich.edu.