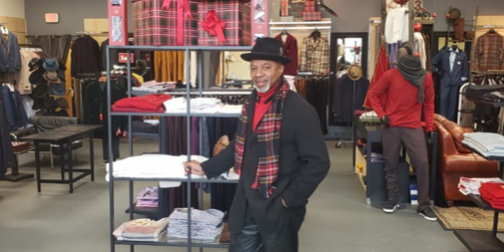 Hot Sam’s, the legendary Detroit outfitter and tailoring shop founded in 1921, is co-owned by Tony Stovall and longtime Grandmont Rosedale resident, Cliff G. Green. Cliff has worked in tailoring and retail since 1967, back when he apprenticed in the trade while attending Northeastern High School in Detroit. Since 1994, he’s been the Chief Financial Officer and co-owner of the iconic men’s clothing store. Next year will mark Hot Sam’s 100-year anniversary, another milestone for an establishment that is among the oldest of its kind in Michigan.

Tony and Cliff’s synergy is unmistakable. Cliff, known to some as the “money man,” is cool and calculated in his words and disposition, focusing his attention on the financial and operational sides of the business. Tony is gregarious and sharp—marketing and sales are his forte. The pillars of Hot Sam’s are exquisite customer service (“the customer is king,” as they say), top-notch tailoring, and luxury clothes at reasonable prices. After all, the lore states that Hot Sam’s got its name from the notion that its pieces were of such quality and affordability that they must have been “hot”—or stolen, that is.

“The Customer is King”

Cliff grew up on Detroit’s eastside and studied tailoring at Northeastern High School. His skills developed so quickly that the instructor asked him to teach the 10th grade students in his senior year. Despite his talent with the threads, Cliff weighed several career options in his senior year. He had taken a computing course at Wayne State University in his senior year, which presented one path. He’d also considered taking his abilities to New York to launch a career in fashion design. In the end, he decided to pursue a college degree to make himself a more well-rounded businessman. He received a scholarship to attend the University of Detroit in 1970, graduating in 1974 with a degree in Business and a minor in Human Resources.

After graduating, he took a job as a Supplier with J.L. Hudson’s. His responsibilities progressed as he scaled the corporate structure to become Department Manager at Hudson’s in Downtown Detroit and then Assistant Personnel Director for Hudson’s at Northland Mall. The jobs were stressful, but Cliff is a self-described workaholic. After six years at Hudson’s, Cliff cofounded GLQ Associates, which sold sportswear, choir robes, leather and suede fits, dresses—you name it. After the partnership behind GLQ ended, Cliff set up shop in his basement, coordinating outfits for an illustrious clientele consisting of Mayor Coleman Young, The Four Tops, GM Executives, and more.

In 1983, an ad for a Salesperson at Hot Sam’s caught Cliff’s attention. He figured he’d work there for the holidays to generate some extra income. Within a month’s time, however, he’d become the top salesman on the floor. Then he became the store’s Union Steward within the American Textile Union. This was also where he met his soon-to-be business partner Tony Stovall, who had been at Hot Sam’s since 1970. When an opportunity to purchase Hot Sam’s emerged, Cliff and Tony put together a business plan and purchased Hot Sam’s in 1994, marshaling the store’s Motown legacy into the 21st century.

Motown artists, mayors, judges, doctors, and executives—countless Detroit luminaries have passed through Hot Sam’s, from its original building on 1317 Brush to its current location on 127 Monroe. It remains a touchstone in fashion on the strength of its name and stellar reputation. How does a store founded in 1921 continue thriving in 2020? “I’ve been in retail since 1967 and I’ve seen the market change many times,” Cliff points out. “You have to be able to adapt to those changes without compromising your base. You can’t alienate the base because they are what kept your doors open all these years.” Part of Cliff and Tony’s strategy has been to bring their children onboard to manage Hot Sam’s social media presence and seek out new growth opportunities. Tony’s daughter, Lauren Stovall, is Marketing Director at Hot Sam’s. Cliff’s son, Chaste Green, worked there as a Sales Representative.

Cliff describes Grandmont Rosedale as a “very community-oriented neighborhood. We know most of our neighbors and many other people throughout the community.” He recalls meeting other parents and neighbors through his kids’ involvement in community athletics—playing baseball and soccer, for instance. He speaks highly of GRDC’s work towards updating local parks and taking on placemaking projects—efforts that have helped sustain the very community sensibilities that Cliff and his wife Sandy Green appreciate the most in Grandmont Rosedale. Cliff also notes the ongoing updates to the Grand River corridor, such as the Streetscape and Parklet projects. He finds that supporting small businesses is essential to the community’s cultural and economic health: “You’ve got to support small businesses. They are what keeps this country going.”

Cliff and Tony would like to extend a 25%-off welcome to residents of the Grandmont Rosedale community! Check out their website https://hotsamsdetroit.com/ and follow them on social media.