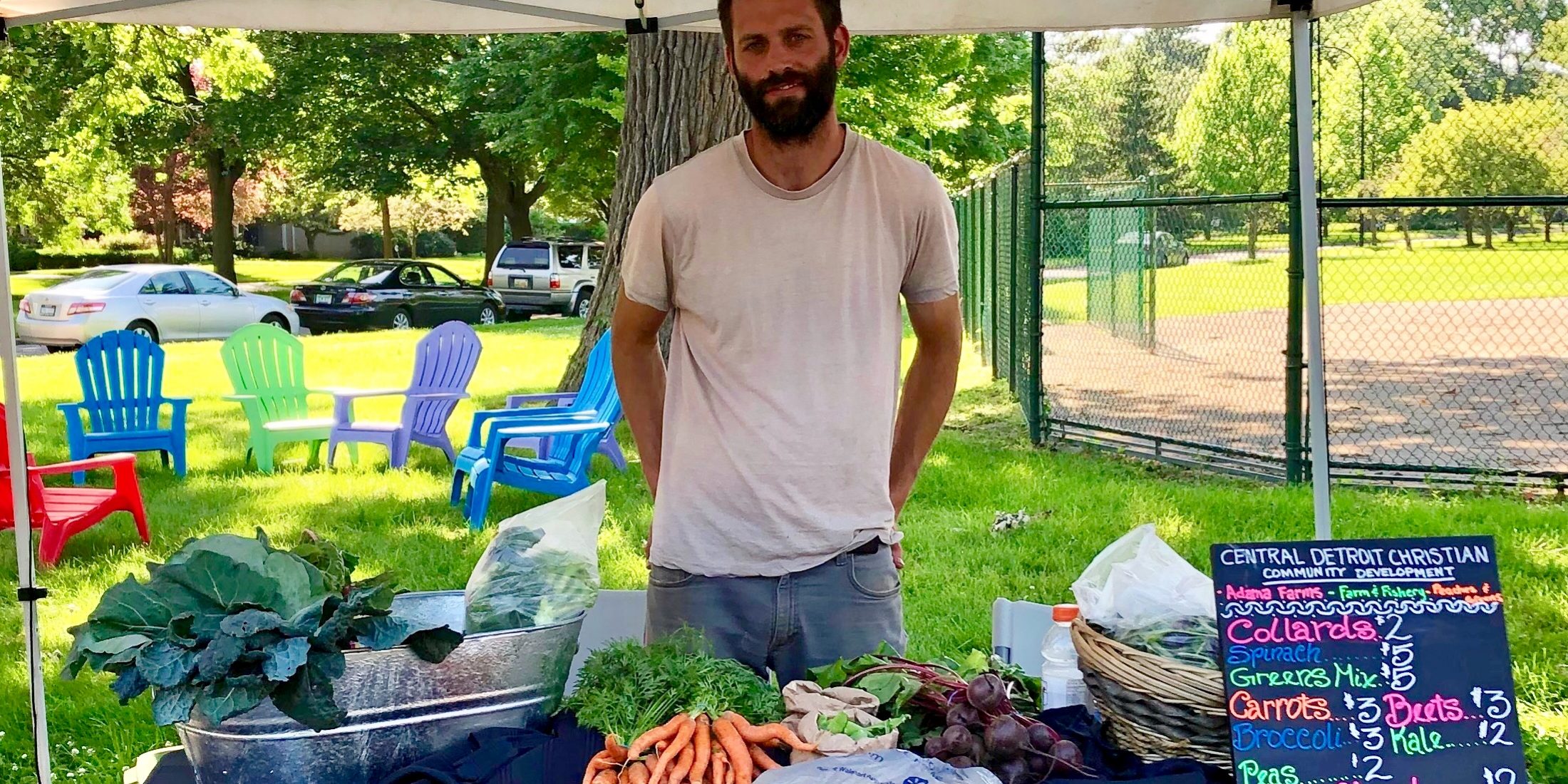 It is Evan Neubacher’s first year at the Northwest Detroit Farmers’ Market. Although it’s still the beginning of the market season, Evan already has loyal customers. At just the third market of the season, Evan chatted with a returning customer and even remembered that his customer’s wife was out of town visiting their grandchildren. Of course, this customer promised to be back to replenish his produce and perhaps to get to know Evan a bit better.

Evan represents Central Detroit Christian Community Development (CDC), 1550 Taylor, an organization that has been in operation on the near west side for 25 years. According to its website, Central Detroit Christian focuses on “empowering people, creating positive opportunities for the community and loving our neighbors as ourselves.” Included in this mission is a youth program for kids which includes a pre-school and after-schools programs, several businesses that support their surrounding community, such as a laundromat, a produce store, a security service, and a Farm and Fishery near the corner of Second Avenue and Philadelphia Street. The CDC Farm and Fishery grows a variety of fresh, organic produce that Evan brings to our Northwest Detroit Farmers’ Market. If you stop by Evan’s tent, you may see collards, spinach, a greens mix, carrots, broccoli, peas, beats, kale, mushrooms, and Swiss chard. It’s a terrific selection of organic, Detroit-grown fresh produce.

FROM INDIANA TO FLORIDA TO DETROIT

Evan’s journey to the Detroit farmers’ market scene is a unique one. He’s from Indiana and his formal education is in economics, but an interest in agriculture led him to take an internship at a farm in Southern Florida. His boss at this internship happened to know the executive director of CDC. Evan began learning more about urban agriculture, realizing that he wanted to work with people, while also maintaining his ties to farming. Evan also has family in the Detroit area, so his move to Detroit after the internship made sense. As a Christian and an education and youth advocate, Evan’s position at CDC sounded just about perfect.

GETTING TO KNOW COMMUNITIES VIA FARMERS’ MARKETS

Evan has enjoyed his exposure to several Detroit communities through neighborhood markets over his two years with CDC. As this is his first year at the Northwest Detroit Farmers’ Market, Evan is still getting to know Grandmont Rosedale. He has found it interesting to see the differences between the neighborhoods and looks at the markets as great representations of each community.

For more information about Central Detroit Christian, visit their website www.centraldetroitchristian.org/. Their office is located at 1550 Taylor Street in Detroit. Also, check out the CDC produce market Peaches and Greens at 8838 Third Avenue. And don’t forget to stop by and see Evan for your weekly produce every Thursday from 3 – 7 pm at the Northwest Detroit Farmers’ Market at the North Rosedale Park Community House, 18445 Scarsdale!