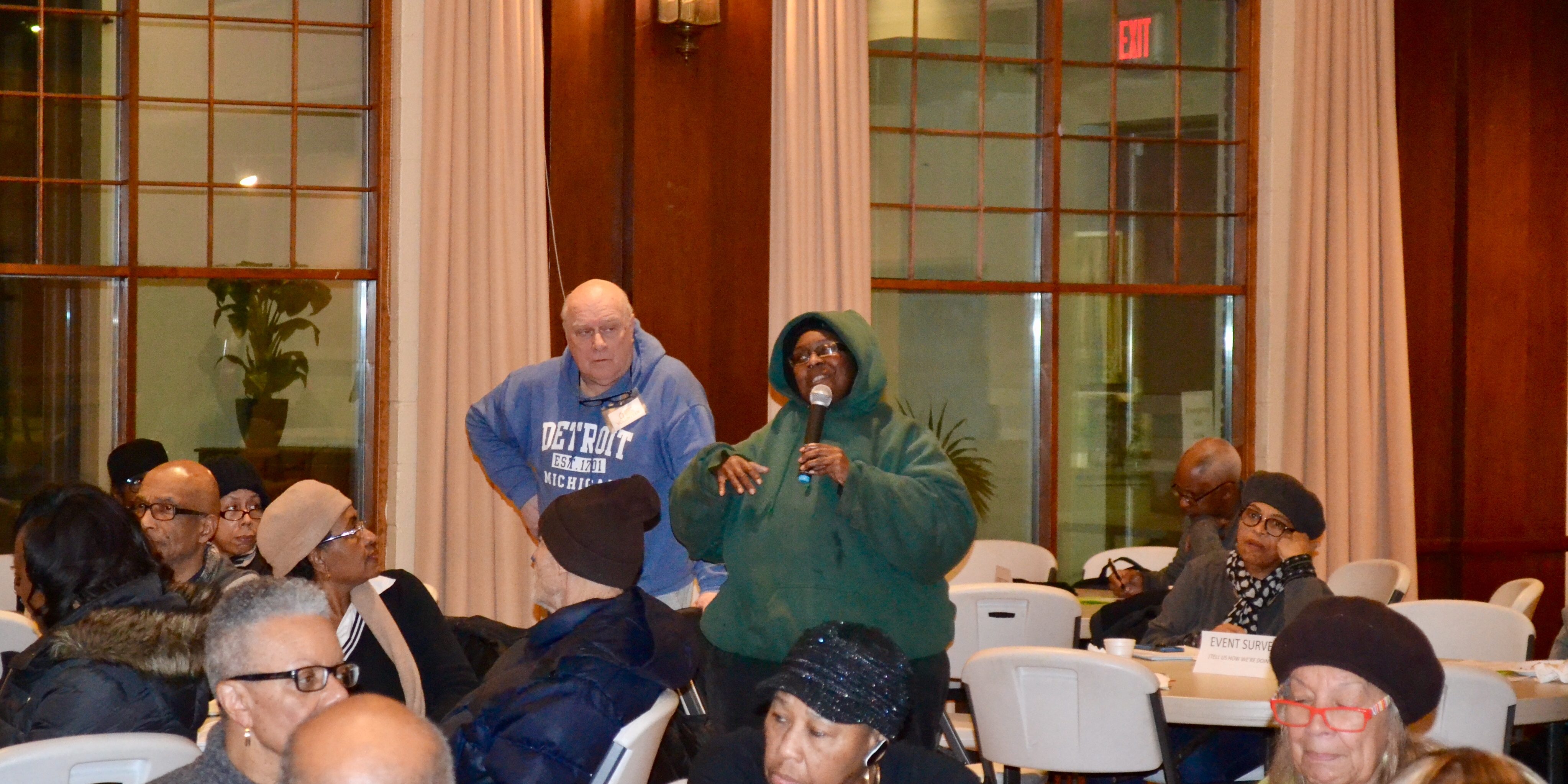 We all have a stake in the safety of our community. So, on Thursday, June 27 community members from Grandmont Rosedale and beyond gathered for a Neighborhood Safety Meeting at the North Rosedale Park Community House to discuss just that – neighborhood safety. The meeting was hosted by GRDC’s Crime Prevention Task Force, a group of Grandmont Rosedale residents that meets regularly at the GRDC offices to discuss community safety programs and concerns.

Topics for these Neighborhood Safety Meetings are recommended by the Crime Prevention Task Force members. In line with a summer theme, many members expressed interest in learning more about summer fire safety, specifically outdoor fires, bar-b-ques, and fireworks. Chris Dixon from the Detroit Fire Department was invited to speak, as was the new 8th Precinct Police Commander Giaquinto who introduced himself and his particular skill set to the attendees.

As the recently promoted commander of the 8th precinct, Nick Giaquinto thanked the community for their vigilance in crime fighting and emphasized the need for neighbors to continue to watch out for each other and their community. Commander Giaquinto graduated from Cass Tech High School and Wayne State University where he studied computer science. He was part of the team that helped the police department update the efficiency of its technology. He said that in his new position as Commander of the 8th Precinct, he “traded places with former Commander Jacklyn Pritchett,” who is now at Giaquinto’s former department, Organized Crime.

Commander Giaquinto touched upon several key safety concerns relevant to the neighborhood including robbery, sexual assault, break-ins, larceny, and motor vehicle theft. He mentioned that the Neighborhood Police Officers (NPOs) have been hard at work attempting to surveille 800 vacant homes and prevent suspicious activity. They average 75 houses per week, coming back in the evenings to ensure no criminal activity takes place. This schedule has made working on other issues challenging. To prevent break-ins, Commander Giaquinto recommended that residents invest in video capable doorbells (i.e. Ring), leave their shades open during the day time, and install iron fences instead of privacy fences. Giaquinto also focused on motor vehicle theft prevention. Giaquinto emphasized that cars get stolen from the street not garages and suggested that residents should be sure to park their cars in their garages.

Fire Chief Dixon focused on a frequent summertime hazard – fireworks. Chief Dixon recommended that residents go to display fireworks and avoid purchasing consumer fireworks. Display Fireworks are the fireworks that city municipalities host, (i.e. on the Detroit River). These are put on by professionals in a regulated environment. Consumer Fireworks are fireworks bought at retail stores most often fired in the backyards of people’s homes. Chief Dixon recommended that if you do decide to buy fireworks, never allow animals or children near them. Animals have been known to grab the fireworks and run away with them, potentially setting them off in unsafe places. Sparklers are not safe to give to children, as they can burn up to 1200 degrees, causing injury. When near fireworks it is important to always have a large water source and fire extinguisher nearby. By law, fireworks cannot be set off on public property, such as school yards, church yards, or the property of another person without their permission. It is also illegal to operate fireworks while under the influence of drugs or alcohol. The governmental body that oversees firework regulation is the Michigan Department of Licensing and Regulatory Affairs (LARA). You can report a nuisance or noise ordinance violation outside of the permitted time- fireworks are not allowed after 11:45 pm – by contacting your local or county police department.

The meeting wrapped up with first time attendee, Tanisha, winning the raffle for a steering wheel lock. If you would like to join the Vacant Property Task Force, let Community Engagement Manager Kitty Yarbrough know at kyarbrough@grandmontrosedale.com, or 313.387.4732, ext. 103. To join or to report an incident, join the Crime Alert Email System by sending an email to: grandmontrosedalecrimealert@googlegroups.com and ask to be added to the list. The next Neighborhood Safety Meeting will be Thursday, September 25 at 6:30 pm at the North Rosedale Park Community House, 18445 Scarsdale. Stay in touch with GRDC to find out about the topic and who the guest speaker will be.