Lemonade and Beyond: A Family Enterprise 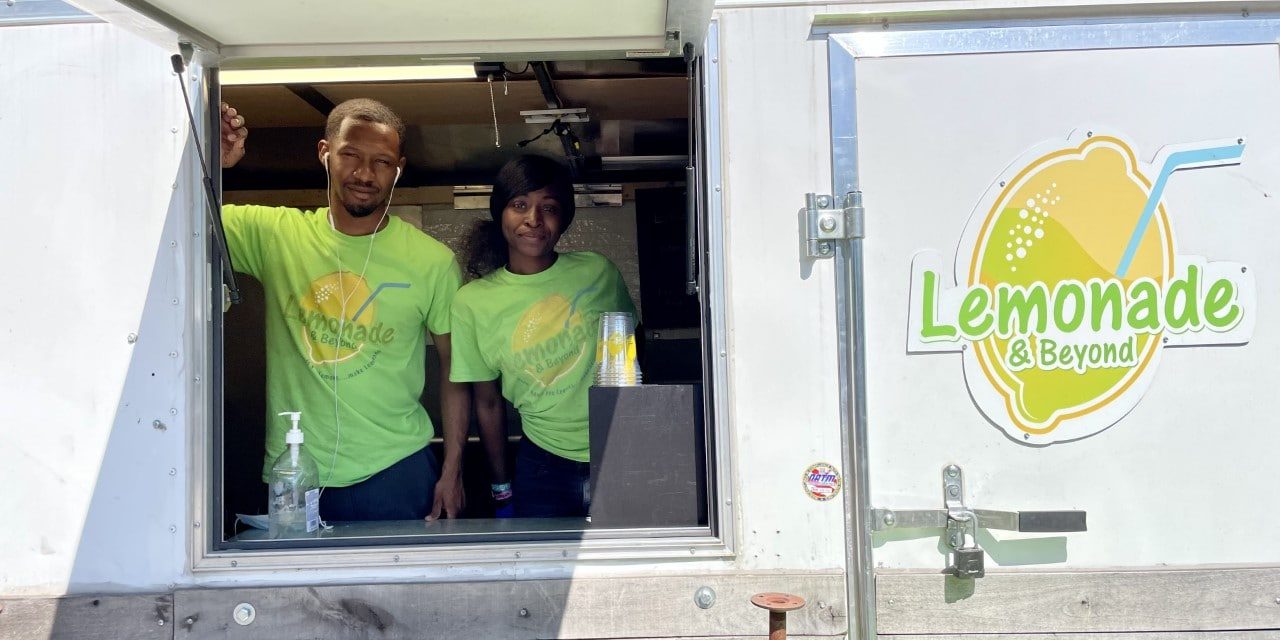 Lemonade and Beyond and the Detroit Original Seafood Truck are much more widely known than Cathy, Rashad, Christie, Rashad, Jr., Nasir, Cadar, Jewel, Laikyn, Laziyah, Martez, Lavoier, or Armoni. Shoppers come to the Northwest Detroit Farmers’ Market just to get a lemonade, or maybe a lemonade with mango, green apple, or the newest option: dragon fruit. The Detroit Original Seafood Truck is so popular, the Market Manager is lucky to book it for one, maybe two Thursdays a season. That long list of names are the people who make both food trucks possible, and they all are from the same family. Cathy and Rashad are the parents of five kids, and Rashad’s sister Christie’s three kids are also in that lineup. Armoni is another cousin, and not yet mentioned is Cathy’s mother who does the shopping. The idea for the food trucks was Cathy’s. She gets her entrepreneurial inspiration from her mom who owns a hair salon and her step dad who owned a clothing store. The inclusion of family members reflects how close this family is, and how deeply they rely on one another. It’s also true that they know how to have fun. With this kid squeezing lemons, and that kid taking orders, this cousin cooking up shrimp, or that uncle doing the driving, it could be argued that Cathy has the most important task: the keeping of the calendar of who is going on which truck and which truck is going where when.

Cathy and Rashad’s family has worked together nearly since they were a family. The two met at Henry Ford High School when Cathy was in 9th grade and Rashad was in 10th. Cathy’s first “adult” job was at a marketing agency downtown. At that job, Cathy “learned a lot about myself. I understood my work ethic and I realized I wanted to own my own business. I love entrepreneurship.” She had watched her mom and step dad run their own businesses and had no doubt that she too could be a business owner. Cathy and Rashad’s first business was a seafood restaurant in Pontiac. When they started having kids, it was natural that their kids learn the business of running a restaurant. “The kids were trained there. They learned all aspects of owning a restaurant: they waited tables, cooked, purchased food, handled deliveries, took orders, learned about inspections, understood what equipment was needed for which task  – all of it!” While the restaurant did well, they were a bit far from where home and their extended family was – in and near Grandmont Rosedale. What might have been an even greater influence to close the restaurant was Cathy’s sense of fun. “I wanted to be a part of festivals, fairs, and markets. I wanted to be around more people. I love festivals and markets! They make me feel like a kid!” In 2015 they closed the restaurant and got a truck. Detroit Original Seafood was the first truck, and as proven by the lines at a few Northwest Detroit Farmers’ Market days and a Movie in the Park! event, the truck is very popular.

In 2019, after a good deal of experimenting with lemonade flavors in Christie’s home kitchen in Grandmont Rosedale, the Lemonade and Beyond truck started up. Cathy included the best lemonade recipes and both trucks moved from events to festivals all over Detroit and some neighboring communities. The crew of kids split up between the trucks, working around school and homework. If you’ve ever waited for Cathy’s crew to make your freshly squeezed lemonade, you’ll realize that they’re clearly family, and that they definitely know how to have fun while running a successful business. Having trucks instead of a restaurant kept Cathy’s family closer to one another and more family members could help out, even Laikyn, 5, Cathy’s youngest, who spends much of the time outside the truck, playing nearby. According to Cathy, she “likes to think she is helping.”

EXPANDING THE ENTERPRISE AND TAKING IT ON THE ROAD

Just as Cathy hoped, her family has worked many festivals: Dally in the Alley, River Days, All Things Detroit, Art, Eats, Beats and Eats, and they are at Downtown Street Eats at Campus Martius weekly. This winter Rashad Sr. and three other family members are driving the seafood truck to Texas for three months. They have never done this before, and Cathy “is a little sad that part of the family is going away,” but she’s not one to discourage anyone from adventure. As for the lemonade truck, Cathy is thinking about pivoting to cider and donuts for fall and winter season. She got some new equipment to make donuts, and has started talking to local cider mills about wholesale options. Some family members have taken on Cathy’s entrepreneurial spirit. There are two more trucks in the works – one lemonade and seafood, the other just seafood. These will be run by Cathy and Christie’s kids. They have a gig at the coming tree lighting ceremony downtown, so the demand is already there. All this success has inspired Cathy to start thinking about opening another restaurant, this time closer to home. Cathy envisions a seafood restaurant with “a Southern feel – a place with live music, “Sea Soul” in Detroit, hopefully here in the neighborhood.”

Cathy and Rashad have been married 21 years. They are both aware that their love of good food, family togetherness, and adventure was not something they invented, but traits that run through their families. Rashad learned to cook growing up and now does most of cooking at home, such as greens, steak, and cheesy potatoes. Cousin and Chef Nedra Harris was on Hell’s Kitchen, and Rashad’s family owns Bert’s Marketplace at Eastern Market. Rashad’s cousin lives in Maryland and yearly gathers family for red beans and rice crab cakes. Cathy and Rashad also know that they are building a legacy for their kids and grandkids. Family, food, and fun. It’s one of the best recipes for happiness. 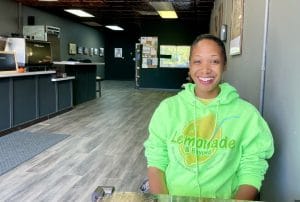 Cathy Torrence, the Keeper of the Calendar

Follow Lemonade and Beyond truck on social media: https://www.instagram.com/lemonadeandbeyond/?hl=en

The Northwest Detroit Farmers’ Market runs every Thursday from 4 – 8 pm through Thursday, Oct. 14 in the parking lot of the North Rosedale Park Community House, 18445 Scarsdale. Follow the Market on social media: