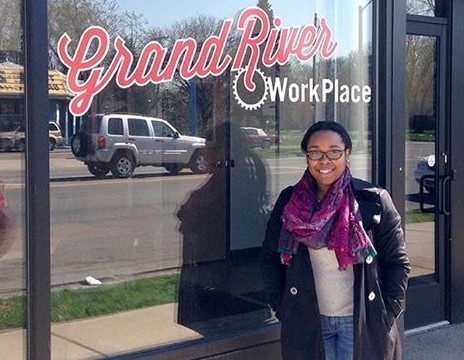 Larissa Carr, GRDC’s Grand River WorkPlace Manager, was recently recognized by University of Detroit Mercy (UDM), as a W.K. Kellogg Master of Community Development Fellow and Spotlight feature. As the Spotlight indicates, Larissa is “leading the economic development initiatives and programs to help the Grand River corridor thrive.” Larissa is indeed busy scheduling programming helpful to small business entrepreneurs, managing the co-working memberships at the WorkPlace, and getting the word out about Detroit’s first neighborhood co-working community.

“Born and raised” on the Northeast side of Detroit, Larissa has had a great deal of experience working with local small businesses and communities to facilitate such projects as façade improvements, park beautification, and clean-ups. Larissa graduated from the University of Michigan with a degree in political science and urban studies. She thought for a moment about going on to law school, “but then,” as she says, “I quickly realized that that was not what I wanted to do.” Larissa was more interested in having a direct impact on urban communities, “especially in Detroit.” For her Master’s degree, Larissa did not want to just study social work. She was looking to combine social work with urban planning as a means of working directly with “environments and people in their environments.” This combination was an unusual one. In fact, Larissa chose to attend UDM because it is the only school in Michigan to offer a degree in Community Development.

As GRDC’s WorkPlace manager, Larissa’s unconventional approach to participating in the revitalization of Detroit has paid off: “I see the energy from the residents and businesses. There is a great sense of community here. People are active because they really believe in their community. It’s inspiring!” Managing a neighborhood co-working space allows the close contact with residents and small business entrepreneurs that Larissa sees as the most effective way to inspire community stability. Sustainability, social justice, and economic strategies for communities are also areas of study that Larissa hopes to pursue. For now, though, she gets great satisfaction in watching the membership at WorkPlace grow, in hearing that the members appreciate the convenience of WorkPlace, the reasonable rates, the many amenities, and the sense of community business that WorkPlace represents. Larissa has come to know many entrepreneurs from a wide variety of businesses who call WorkPlace home for their business: “I love to see the twinkle in their eye and be able to support them to get to the next level for their business. WorkPlace gives people a space to have a conversation about their businesses, a place to help them grow.”

Larissa’s work ethic and genuine enthusiasm for Grandmont Rosedale and her city indicate a bright future for both Larissa and the local small business community. Keep your eyes on Larissa. There’s no telling just how far this go-getter will go!