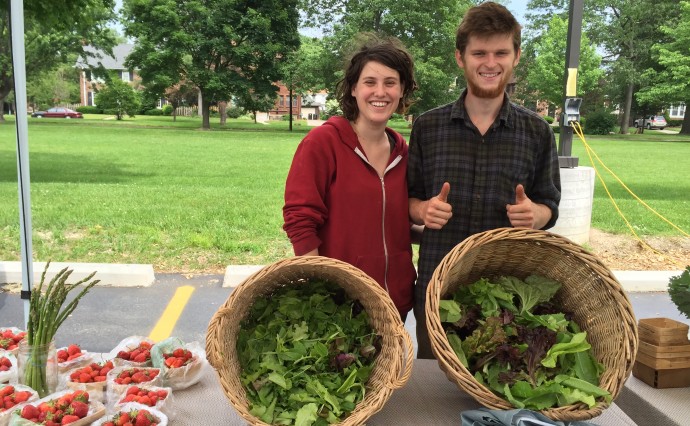 Beaverland Farms owners Brittney Rooney and Kieran Neal met at Loyola University in Chicago. They graduated with degrees in Political Science and English, and then headed out into the world to start their careers – in farming. One of the places where Brittney learned a great deal about organic farming was at a large farm in Pennsylvania, and Kieran learned about urban farming in both Italy and China.  They both learned about food policy and that growing healthy food and getting it distributed also involves governmental policies and effective communication, so you could say they did put their degrees to work, just not in expected ways.

Brittney and Kieran also learned how to create water catchment systems so that keeping the crops watered is sustainable and self-sufficient – “a farm that cares for itself,” is how Brittney describes it. The two believed in the importance of getting the local community involved in the farming, the harvesting and certainly the eating of their produce. They also learned about the importance of collaboration with other farmers in terms of growing and selling their produce.

Brittney and Kieran’s passion for healthy foods and farming naturally lead them to want a farm of their own. They were looking to rent or buy some land in the Midwest. At first they thought they’d start farming in Wisconsin or rural Michigan, but it proved too expensive. And then they saw the land on Beaverland in Brightmoor online which they visited three times before they decided to buy. Then they got to work developing their farm. Beaverland Farms is on both sides of Beaverland and offers greens, cucumbers, squash, onions, garlic, and a variety of lettuces. Brittney and Kieran would also like to include more and more permanent agriculture which does not involve yearly planting – such things as berries and fruit trees and even asparagus.

What they didn’t expect was the community of growers and community gardeners that welcomed them and immediately worked with them. “We feel like we’re hopping on a train of growth,” says Brittney. “We’ve done urban farming in lots of places, but this community of market gardens was something we weren’t expecting.” A great example of the cooperative nature of Detroit farming is evident on Saturdays at Eastern Market. Beaverland Farms shares a table at Eastern Market with other community gardeners. “If we bring 10 bags of spinach and another grower brings 5 and 5 are sold, we all share the proceeds,” explains Brittney, “It’s a true cooperative.”

Plans for the future of Beaverland Farms include a u-pick farm where the community can harvest their own raspberries or strawberries, and more fruit trees. They haven’t given up finding some land in rural Michigan one day. Their thoughts are of course of farming, but of a different type. “We’re thinking about oak savanna food forestry, or growing more fruit trees,” says Brittney.  “We’d plant trees we won’t see fruit from for 10 years.” Farming, it seems, is not just about what we eat today, but what and how our children and grandchildren will eat. If you’d like to try some of what Beaverland Farms has to offer, stop by the Northwest Detroit Farmers’ at the North Rosedale Park Community House parking lot, 18445 Scarsdale, any Thursday from 4 – 8 pm through October 1. You can also check out their Facebook page at: https://www.facebook.com/BeaverlandFarms.