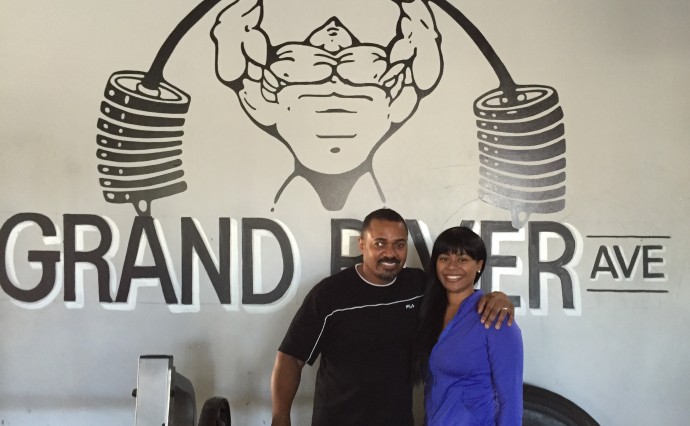 Joseph Braxton, or “JB” as most people call him, bought the building at 18230 Grand River in 2008. The economy that closed the Ford dealership where JB was an electrical technician had more trouble in store for JB: JB paid the bills on his new building without being able to open it because it took three weeks for the machines for JB’s new Powerhouse Gym to arrive. When he could finally open, JB offered his customers a free Thanksgiving Day trial run. It was a rough start for sure, but JB was determined.

JB had been working out since he was 17, and so his transition from electrical technician to gym owner made sense. Before opening his gym, JB did his research. JB learned that at the time, there were only three gyms in Detroit, and that Grandmont Rosedale was one of the most densely populated areas of the city. Since it opened, the Powerhouse on Grand River has truly become a neighborhood gym. According to JB, “Most people who come to the gym live within five miles, and about 50% live within one mile.” There are several personal trainers who work with customers at the gym. JB does his best to facilitate a good match between trainers and clients, and JB also pays attention to the tastes of his customers. “The older crowd tends to come in the morning so I put on a radio station that appeals to them. At midday I change the radio station to appeal to a younger crowd, and in the evening, my youngest customers tend to come in so I change the station again. I change the radio three times a day.” JB’s efforts to make his customers feel comfortable and welcome and is also reflected when he greets all of them with a smile, and most of them by name. These efforts have paid off. According to JB, customers leave only when they move away, not because they’ve found another local gym to go to.

JB has plans to offer his customers even more. His dream is to build an upper floor where there would be spinning classes, aerobic classes – a variety of cardio classes. He’d keep the weights on the main floor. JB knows it’s ambitious, but once again he taps into his “never give up” philosophy. JB knows more than most about how important that ethic is.

Years ago, JB got in a bad motorcycle accident. He broke his pelvis, tore his aorta, lost sight in one eye, had a stroke, and spent some time in a coma. It took him a full year to get back on his feet. While he was in a coma, JB’s mother and sister took over running the gym. They had never run a business before, but they knew how important it was to JB, so they were committed to figuring it out. They successfully kept it running without JB having any idea. After JB was back at the helm of Powerhouse, the woman who witnessed the accident and who called 911 wanted to find out if the man she saw get hit was ok. She went to the motorcycle bar where she saw men wearing the same jackets. She asked inside if they knew anything about the man who had been hit. The men at the bar told her to go to the Powerhouse on Grand River and to ask the guy behind the counter if he knew anything. That man was JB who used his own gym for his rehab. JB was touched that she took the time to find out about his well-being. He was so taken he offered to buy her dinner. Now Toria, or Mrs. Braxton, helps run the gym with JB, her husband.

While you’re sure to get a good workout at the Powerhouse on Grand River, you might just also get a lesson in determination, the importance of family, overcoming hardships, and the power of kindness. JB calls it his “gym ministry. I love what I do. I love to see people reach their goals – the come up.” Stop by the gym and see for yourself. It’s open M – F 6am – 10pm, and Sa – Su 9am – 5pm. You can call JB at 313.397.3615.