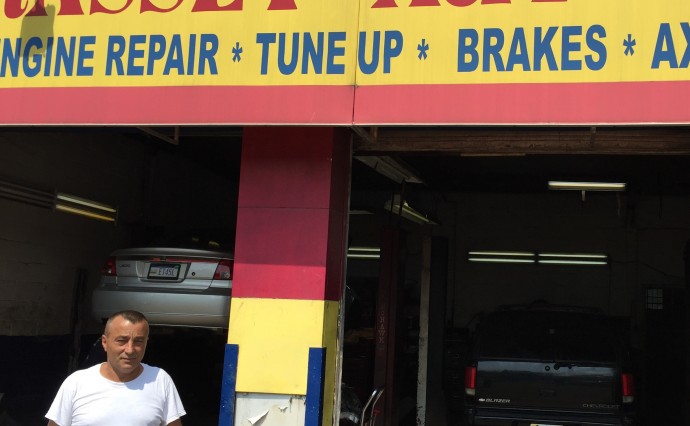 Kassey Makki has been in business in Grandmont Rosedale for close to 20 years and at his current location, 19200 Schoolcraft, for the last 10 years. Kassey (pronounced “Casey”), has many repeat customers whom he greets always with “How are you, Honey?” Knowing that his customers trust him, Kassey asks even the long-time customers “Are you happy with the service?” to which one customer replied, “Yes, as always,” and another answered “You’re the man!”

Over the years, Kassey has come to know many Grandmont Rosedale residents and is very aware of how a stable business can lend stability to the entire community. Kassey’s understanding of how community works extends beyond his reliability and expertise as a mechanic. Kassey saw the Grandmont #1 Mower Project cutting the grass on a vacant lot near his business and offered to lend them a lawnmower. Dani Wilson, GRDC’s Volunteer and Outreach Coordinator thought it “very kind of Kassey” to lend his mower: “He’s very generous and it was a great help!”

When he’s not lending lawn mowers, Kassey works on all types of cars, doing everything from major repair to tune-ups and brakes. His own training began practically as soon as he could walk: “I was born a mechanic.” His father was a mechanic as was his grandfather. Kassey learned his trade in Ivory Coast, where he grew up. After moving to America in 1992, Kassey met and married a woman from Sierra Leone and together they have five children, all girls. While being a car mechanic is typically a job associated with men, Kassey has taught all of his girls about cars. He would like it very much if one of his girls becomes a mechanic, but would rather they choose for themselves.

The next time you need your tires rotated or your transmission looked at, consider stopping by Kassey’s Auto Repair. He’s on the corner of Piedmont and Schoolcraft. His hours are Mon. – Fri. 8am – 5pm and Sat. 8 am – 3 pm. You can call with questions at 313.836.3046. Don’t be surprised if Kassey calls you “Honey.” He calls everybody “Honey.” For him, it’s a sign of affection for his customers and neighbors who he calls “good, good people.”