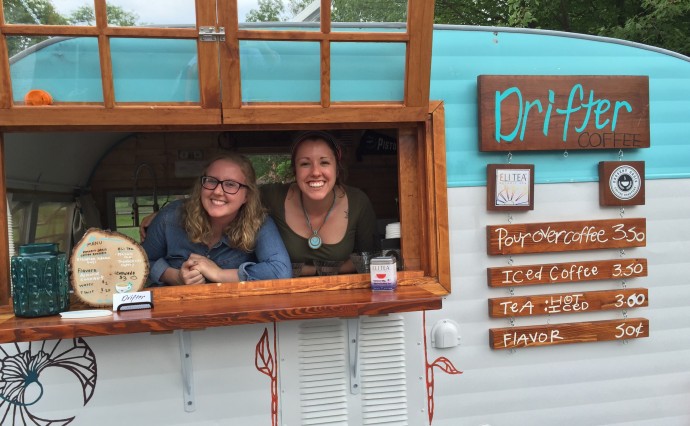 Alleah Webb, self-described “head honcho” of Drifter Coffee, parks her mobile coffee truck at the far south end of the parking lot at the Northwest Detroit Farmers’ Market, opens the side window, and puts on a pot of terrific coffee. Launched just over a month ago, Drifter Coffee often draws people who’d like a closer look at the truck, and then they try the coffee and it’s the coffee that’s starting to turn curious people into a growing customer base. A coffee truck is a novel idea for sure, but Alleah knows the importance of brewing a great cup of coffee to keep her truck and business running.

From Mount Pleasant to Detroit, Alleah has worked in the coffee industry for more than five years, and now she can add small business owner to her resume. Drifter Coffee has been in the works for six years. Alleah studied business entrepreneurship and leadership at Central Michigan University, so she has a very good idea just what it takes to establish a successful business. The idea for running her business from a truck came pretty early: “I knew I wanted to go mobile,” Alleah says, but next came the project of finding a truck she could use. The beautiful teal and wood accented truck she parks at the Market sure didn’t start out that way. “There were holes in the floor and ceiling, but I saw it and said ‘This is it.’” She was with her dad when she saw the truck and soon he went to work. About eight months later, the truck had been transformed.

Alleah’s coffee business is doing well. She often asks her sister Jessica to help out. The help is needed as Alleah parks her truck at the Wayne State University Market, Western Market in Ferndale, and Eastern Market as well as our Market. She also has several community events and festivals on her schedule around southeast Michigan. As Alleah drives and brews, she’s keeping her eye out for a permanent place to set up shop. Next summer she may just head out west, which seems very fitting as it’s called “Drifter” Coffee. “What I love most is making coffee for people,” Alleah says. Along with the pleasure of making her customers happy with a terrific cup of coffee, Alleah’s truck offers her a unique way to see southeast Michigan and beyond.

If coffee’s not your thing, stop by the truck and enjoy a tea, lemonade, or a pastry. Take a look at the dessert coffees and flavors Alleah offers. You can contact Alleah at driftercoffee@gmail.com, or just stop by the Northwest Detroit Farmers’ Market on Thursdays any time from 4 – 8pm at the North Rosedale Park Community House parking lot, 19445 Scarsdale. Drifter Coffee will be at the Market every Thursday through the end of July, and then every other week in August and September.