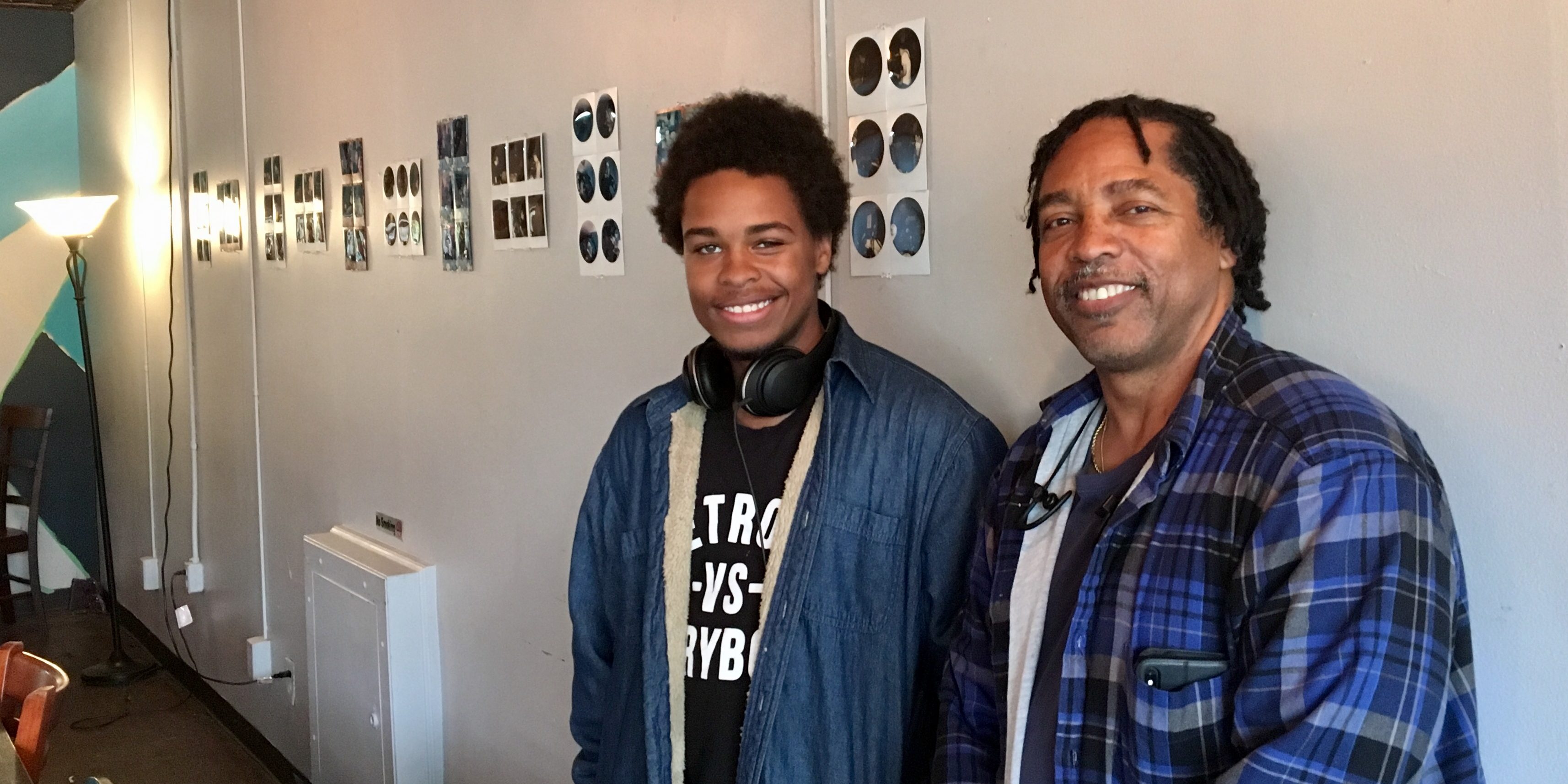 Along with manners and self-sufficiency, one of the most important things a parent can teach their child is a love of music. Once a child reaches a certain age though, just which musicians to love is out of a parent’s hands. Grandmont Rosedale resident Andrew Martin has developed his own taste in music that differs from his dad, James’, but the love and performance of music is central to both their lives.

James came to Detroit from Buffalo, New York in the late 1970s. As a high school student and then during his first couple of years at GMI, (now known as Kettering University), James played bass and/or sang at local parties and street festivals. School started taking up more and more of his time as did starting a family, so James’ playing took a back seat for a while. In the mid 1990s James picked up his guitar again as well as some work at local churches. Although James retired from GM, he has since worked at a forecasting and consulting firm. He works full-time, but the family demands on his time are a little less – enough to allow him to recently take lessons from Lamont Johnson, a well-known, local bass player who has a long list of former students as well as years of experience.

James’ son Andrew first heard Jimi Hendrix and Sonic Youth on vinyl. He still prefers that sound as well as those artists. Andrew got his first guitar when he was 13, and within that first year, he gave Jimi Hendrix a try. With the help of YouTube, Andrew has learned quite a bit of Hendrix, as well as others, such as Gary Clark Jr. He also sings, and plays pretty decent bass guitar and piano. Andrew is mostly self-taught and plays most often by ear. What Andrew especially listens to when he performs is the other musicians. “It’s about the fluency of the conversation among the musicians,” he says. Andrew’s taste is pretty varied. Besides Hendrix, he’s also a fan of The Roots, The Chronic, Dr. Dre, and B. B. King.

A GIG IN GRANDMONT ROSEDALE

Andrew graduated from high school just three years ago, but has already played several gigs at parties and small clubs. Last year Andrew teamed up with his dad singing lead, another Grandmont Rosedale resident Joshua Cooper on keyboards, and a couple of other friends on drums and guitar, for a North Rosedale Park Civic Association benefit concert at the Community House. As you can see from the video clip below, they sounded great. They also looked like they were having a pretty good time making music together.

YouTube did not exist when James was learning to play bass, but, according to James, they share “parallel paths to music”. While their tastes vary some (James’ top picks are Earth, Wind, and Fire, Prince, the Gap Band, and Cameo), the time they put into learning their instruments is very similar. Although James also dedicates time to his community as a member of the North Rosedale Park Civic Association board of directors, he “tries to get his hands on a guitar about 30 minutes a day.” He sings nearly every day: “If I’m driving, I’m singing.”

Recently James joined a band he found out about through a co-worker: Patio Heroes. The band has over 100 songs in their play list and have played several venues in and around Detroit.  Andrew plays with a few bands as well. He’s played with the Motor City Blues Crew at Burt’s and often busks at Eastern Market, depending on the weather and how much time he’s got between work and school – Andrew is a journalism student at Wayne State University. Andrew also writes music. He’s been working with a friend who also plays bass and guitar. They have about six songs that Andrew says are “in pretty good shape.”

James and Andrew’s benefit concert last year at the Community House highlighted their skills as musicians and how well they work together. It’s clear that while Andrew might prefer Kendrick Lamar to the Temptations, the father-son share a love of music and the dedication to make some great music themselves while supporting their community.

James and Andrew hope to do another benefit concert in the future, so keep in touch with NRPCA to find out more. You can like the North Rosedale Park Civic Association Facebook page, or visit their website: https://www.nrpca.org/