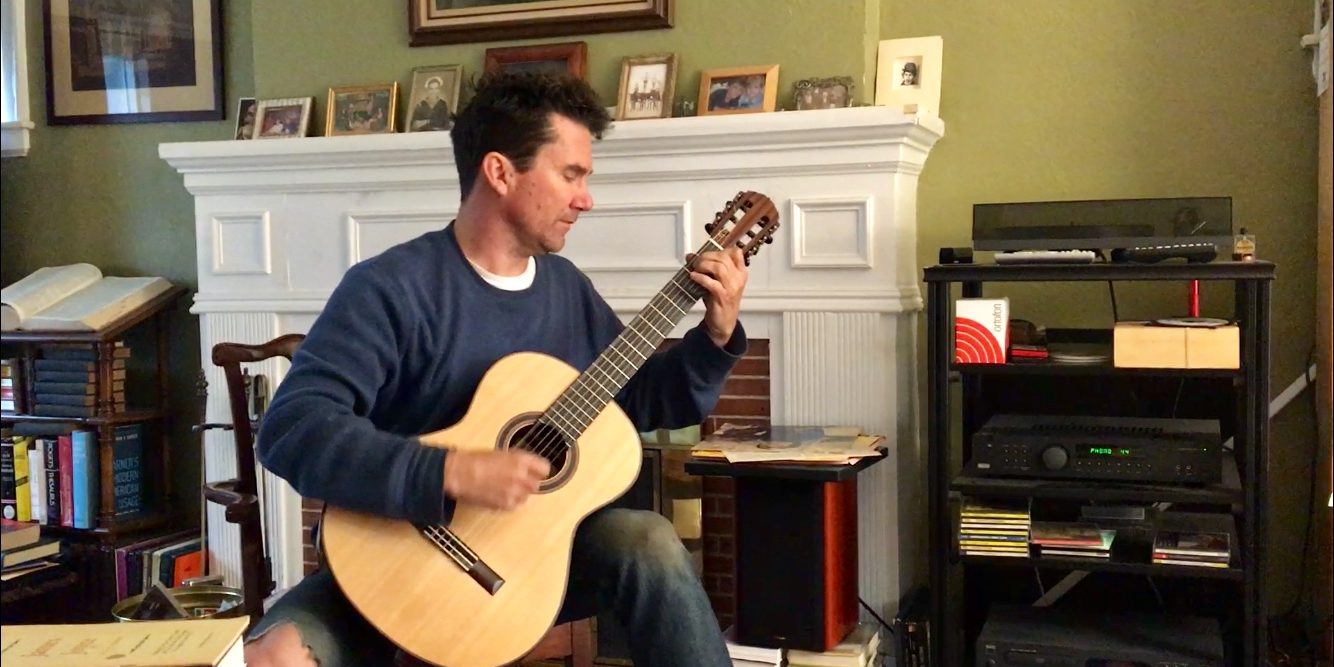 After living in New York City for several years, Peter Fletcher finds that Detroit, specifically his home in Grandmont Rosedale, is “calmer, quiet, more conducive for learning and practicing.” In fact, Peter says “I’m a better artist here than I was in New York.” As Peter makes his living performing classical guitar, giving about 100 solo concerts a year all over the country, this is no small thing.

Like many musicians, Peter originally had his eyes on making it in New York. He had gone to New York City on a family vacation in the late 1980s, and “vowed I’d move there.” Peter had already had success in his home town of Atlanta, Georgia. His first paid gig was at a wedding reception when Peter was in 8th grade. This gig lead to others, and also lead Peter to seriously pursue music. After high school, Peter made it to Rochester, New York, earning a BA and MA in Music from Eastman School of Music. Peter then went back to Georgia to teach at Emory University. For six years Peter taught guitar and had more gigs than he had time. Peter was “doing well and had a fun life with a red convertible sports car.” His first CD was released internationally to rave reviews and a profile in the Atlanta Journal. Peter’s bookings took him to places outside of Atlanta, but Peter knew that he was a “big fish in a small pond.”

A DEBUT AT CARNEGIE HALL

In 2003 Peter got a place in New York City and began touring more widely than ever, covering the Midwest, the South, and all over New England. His second CD came out a year later, the same year Peter made his debut at Carnegie Hall. During his time in New York City, Peter began his schedule of about 100 solo concerts a year, a schedule he still truly enjoys: “It’s never boring. It’s always challenging and fulfilling. Learning a new repertoire and getting it ready is a wonderful challenge.” After several years of living in New York, Peter ran across an article about Detroit in the New York Times, which is when the serendipity that so often seems to be at work in Detroit began.

ON TO DETROIT AND GRANDMONT ROSEDALE

In all his touring, Peter had never been to Detroit. After reading the article, Peter thought, “I might as well go.” After performing in Cincinnati, Peter headed north to Detroit, staying at the MGM hotel. He asked the concierge where the houses were and was told to head north on Woodward. Peter was amazed at the homes in Boston Edison, and then he spotted Blessed Sacrament Cathedral. “Churches often have the best acoustics,” Peter says, explaining his curiosity. At the Cathedral Peter met Sister Beth who invited him out for a cup of coffee. Peter explained the motivation for his adventure to Detroit, at which Sister Beth said, “You have to meet my friend Josh.” Josh Guitar (yes, Guitar is his name), was happy to not just meet Peter, but invited Peter to stay at his home in Grandmont Rosedale while he checked out what Detroit had to offer. Peter stayed with Josh, getting to know Josh, Detroit and the neighborhood, for about a month. The longer Peter stayed and the longer he thought about it, the closer he got to thinking. “Detroit has an international airport, world class museums, opera, lots of music, character, theater, proximity to Canada, access to the CBC, four seasons, the most beautiful real estate in the country, and a truly great music station-WRCJ. I grew up listening to the DSO on WABE in Atlanta. How could I not move to Detroit?” The only question then was where in Detroit Peter would live. After getting to know several of Josh’s neighbors in Grandmont Rosedale, Peter “just knew.” He bought a home in Grandmont Rosedale and filled it with his favorite books, his prized fountain pen collection, and lots and lots of music.

Peter didn’t just buy a house in the neighborhood, though, he jumped right in to the spirit of community that so well represents Grandmont Rosedale. Within his first couple of years living here, Peter gave a benefit performance for the Legacy Project of the North Rosedale Park Civic Association and has attended several community events. Peter continues to tour, sharing music that he loves, looking forward to the magical moment when “I’m with the audience and they’re with me in a sort of mutual performance.” When he gets a break he returns to his beloved home and neighborhood where he’s “more relaxed and more focused, in a neighborhood with nice people.” As Peter sees it, “Moving to Detroit was one of the best moves I’ve made.”

Peter just came back from a performance in New York, and in February he’ll be in Alabama. To keep up to date on where Peter will be performing, you can check out his website: http://www.peterfletcher.com/

To hear a bit of Peter’s gift, listen to him perform a portion of Vivaldi’s Concert in D below: