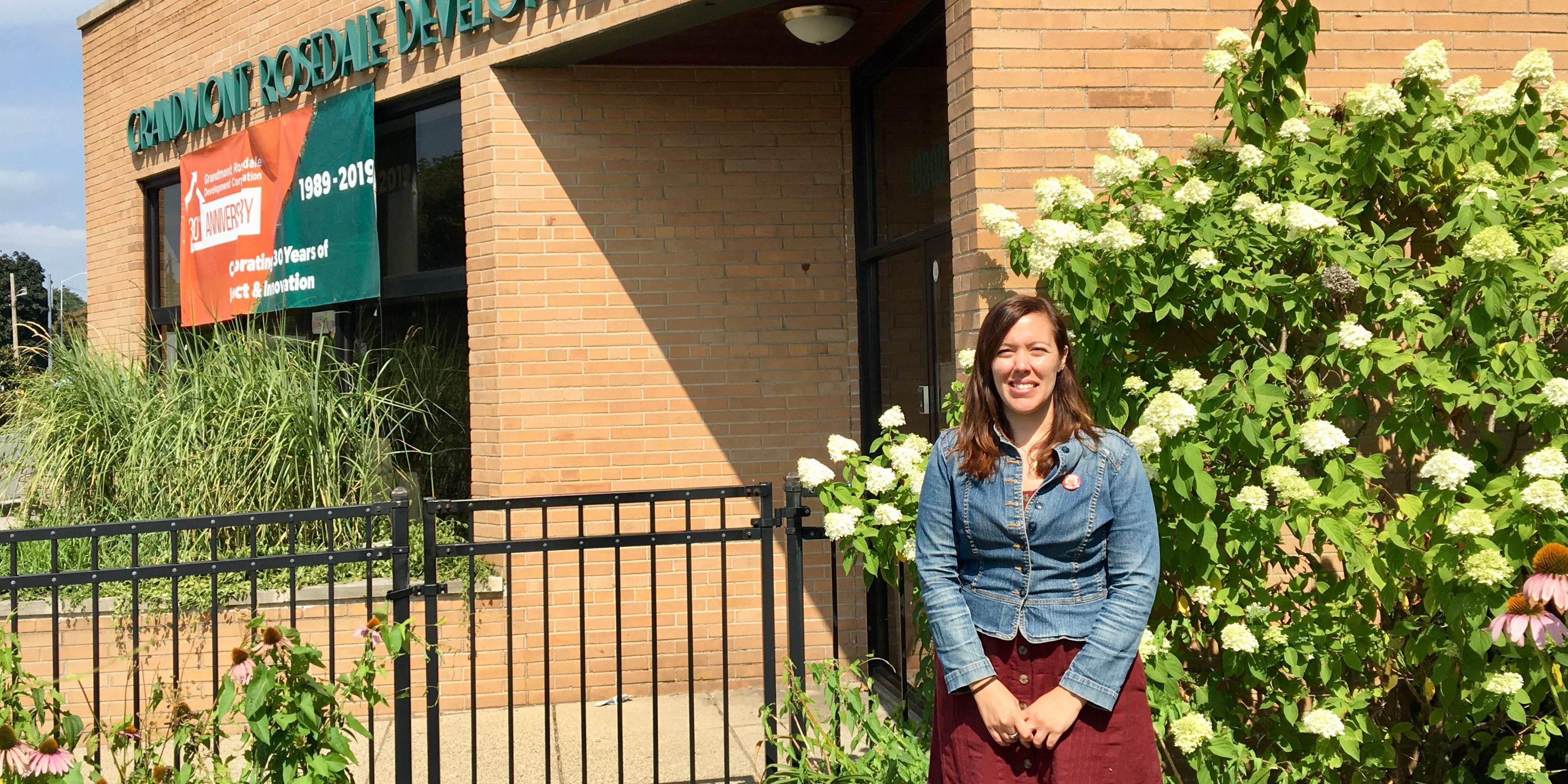 As many people in Grandmont Rosedale know, Amanda Brewington first came to our community not as a resident, but as the owner of a coffee shop. From its first days as a pop-up, Always Brewing Detroit was much more than a coffee shop, and Amanda was much more than a shop owner. Her ability to connect with the Grandmont Rosedale community was pretty immediate, as was the welcoming response from residents who were thrilled to have a place where they could sit with neighbors over a cup of good coffee and catch up. You could say that Amanda’s first shot at starting the kind of shop she wanted to create was when she was 11 years old. Her fellow 6th graders were soon to be big kids, moving on to the middle school. Amanda wanted to have a sort of graduation party, but didn’t want the kind of party where some kids were invited and some weren’t. Instead of individual invitations, Amanda insisted on flyers, and she handed them out to every kid in the 6th grade. “I wanted to invite everyone,” Amanda remembers. “I wanted to bring people together, to connect people. I was all about inclusion.”

As a freshman at Michigan State University, Amanda learned the particular value of a local coffee shop. She didn’t know anyone in East Lansing and thought about how she should go about getting to know people and the community. She went to an open mic night at a coffee shop and met people who told her about the community she would be living in for the next several years. “I realized that a local coffee shop is a great place to get a feel for a neighborhood,” Amanda says. She also realized that she “wanted to open that kind of coffee shop some day.”

After graduating with two Bachelor’s degrees, one in Communications with a specialization in Public Relations, and another in Telecommunication, Information Studies, and Media with an emphasis on Audio Production, Amanda worked at an audio production house. There wasn’t a whole lot of community to connect with, and the hours were long. Amanda had the thought “If I have to work this hard, I’d rather work for myself.” And lucky for us, her next thought was “I want to move to Detroit and open a coffee shop.”

Amanda quit her job, got a waitressing job with hours that were more flexible, and enrolled in a business plan writing class. She then took a small business workshop through TechTown’s former THRIVE program. Her mentor Derrin Leppek guided Amanda through the next steps of starting her own business which were to finish her business plan, find a location, and then find funding. Amanda met Derrin at Motor City Java House in Old Redford, not far from Grandmont Rosedale. Amanda liked the feel of the place – it was as much a community space as it was a coffee shop. Although Darrin was not a coffee drinker, he did understand what Amanda was after in a coffee shop. He set up a meeting with Tom Goddeeris, GRDC’s Executive Director at the time.

The day of the meeting was dreary, and Amanda was pretty wiped out from a late and long night of waiting tables. “I wish we had a coffee shop in our neighborhood,” Tom told Amanda when they met in his GRDC office. “Let’s get in the truck and look at buildings.” Amanda had never been to Grandmont Rosedale, had never heard of Grandmont Rosedale, but not too far into the tour, her “What is this place?” turned into “I love this place!” The former Neighborhood City Hall at 19180 Grand River stood empty. Tom introduced Amanda to the landlord who promised they could “work something out” when Amanda told him she just wanted to pop up for a month to see if the community could support a coffee shop.

Amanda and her dad painted and cleaned, so the place looked good, but there wasn’t much furniture. Tom talked to the GRDC board and community members. Chairs, tables, a couch, even art for the walls pulled from people’s attics and garages. Always Brewing Detroit opened the Monday after Thanksgiving at 7 am. By about 7:05 am a group of four early morning walkers came in had coffee and, as Amanda remembers, “cleaned out my very limited selection of pastries.” And the people kept coming. That first month there was no wifi, few pastry options, hot chocolate made with water, but good coffee, and a growing inventory of community connections.

Just as she had planned years before, Amanda set out to create a community space. Grandmont Rosedale residents saw this immediately and began to shape the space Amanda created. “You need a clock,” said one resident. Amanda got a clock. “You really should have green, biodegradable cups.” Amanda got green cups. “I like whipped cream in my hot chocolate.” Amanda got whipped cream. “I wanted the community to know that I wasn’t bluffing. I was listening, and I was planning to stay,” Amanda says. Neighbors organized a craft night, a poetry night and two open mic nights. Whenever anyone from the community asked if they could have an event, Amanda said yes and figured out the details later. And then, after 28 days, the pop-up was over. When she met with her mentor Darrin for a follow-up, he asked how it went. “I lost $900, 15 pounds, and I still had to wait tables three nights a week.” But Amanda had created what she had envisioned – a community meeting space that also served coffee. “With proper signage and wifi, I think it could work,” Darrin told her, “but it’s up to you.”

Amanda needed an espresso machine for the shop and she had a shot at winning the proceeds at a city-wide Detroit SOUP to help pay for it. The SOUP was at the Jam Handy building down on East Grand Blvd. There were about 400 people there. Not used to speaking to big crowds, Amanda nervously began with “So, anybody here from Grandmont Rosedale?” Cheers from two tables full of Grandmont Rosedale residents. The other three pitches were good, so Amanda figured that at least she got the word out about her shop. She didn’t dream she’d go home with $2000 that would cover the cost of the new machine. Amanda’s mom witnessed the evening and told her “They really want you to do this!” In February of 2013 Amanda began the process of opening up her shop. She got wifi, a sign, installed her new espresso machine, and opened the doors July, 2013.

For the next three plus years Always Brewing Detroit became exactly what Amanda envisioned and exactly what the Grandmont Rosedale community needed. It was a welcoming place where neighborhood organizations could gather to plan events, where poets and musicians came to perform, where other businesses popped-up, where people came to get a little work done, and where friends met for coffee. Amanda had to continue to work waiting tables while putting in long days at the shop, and so, after nearly four years, Amanda decided to sell the shop. While the community was indeed sad to see Amanda go, what she created remains. This, perhaps, is the truest testament to both Amanda’s vision and the community’s support. Lindsey Marr is the new owner of the coffee shop, now called Town Hall Caffé, where people still come for game night, and knitting groups, and litter pick up clubs, and simply to have a cup of coffee.

Amanda’s experience as a small business owner lead her to teaching entrepreneur classes and a position as a loan officer with ProsperUs Detroit. She consulted out of the Grand River WorkPlace, GRDC’s co-working space just down the street from her old coffee shop. She didn’t have to wait tables anymore, her work hours were less demanding, and she was thrilled to be back in Grandmont Rosedale, but she did miss the close connections she had made with the wider community. And then a former neighbor emailed Amanda the job description for Deputy Director for GRDC, wondering if she knew anyone who might be interested. “Maybe I’ll try,” she thought. Soon enough Amanda was sitting in the same chair in the same office of GRDC’s new Executive Director Sherita Smith. “It really came full circle,” Amanda says. “I like being in a place where I can walk up and down the street and know everyone. I’m at home here.”

Amanda comes to GRDC not just with hard-won entrepreneurship experience, she knows the community. The thinking that inspired the coffee shop is the same thinking she brings to GRDC: “Part of my job is to make GRDC more visible, listening to the community, and being available,” she says. As a resident-lead organization these skills are essential. Amanda listened so well when she owned the shop, she still remembers how many residents like their coffee.