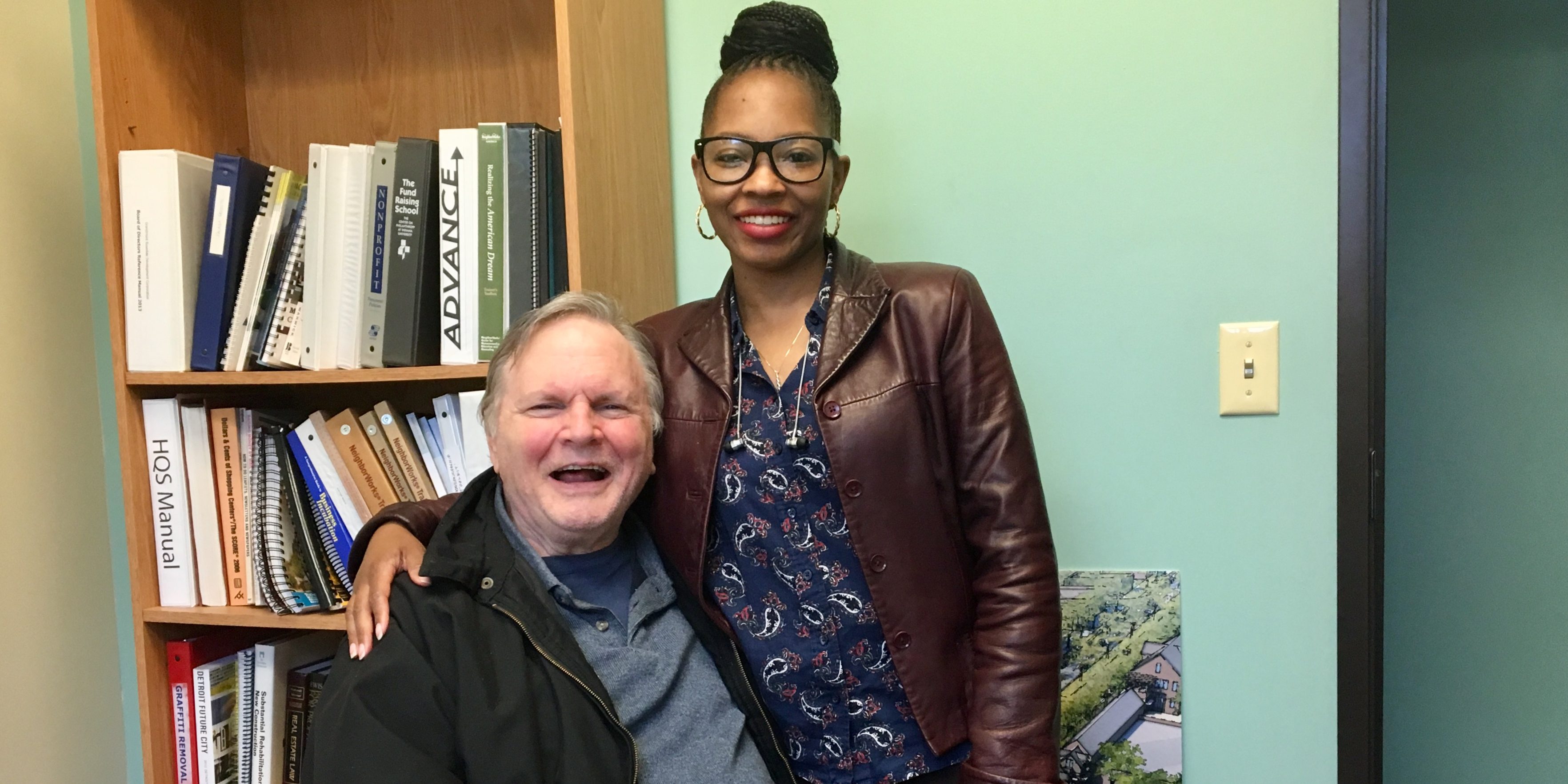 In 1989 John O’Brien was the first and only employee of Grandmont Rosedale Development Corporation. John’s basement office at Mercy College was just big enough to hold a desk with a telephone, and a chair. As John remembers, “it did have a window well, and it was free.” From that basement office, GRDC began its steady growth into the one of Detroit’s most innovative, impactful Community Development Corporations.

Before becoming GRDC’s first Executive Director, John was active in Grandmont Rosedale, having moved here about eight years before. He had had many conversations with neighbors about what to do about the vacant and/or poorly maintained homes they saw in the community. The issue was greater than what any single resident could tackle, so as Grandmont Rosedale has always been about community, the residents began to share ideas and resources about how to address vacancy and blight.

There was a business association in the early 1980s called Grandgreen that included businesses from Greenfield to Evergreen along Grand River. Grandgreen had a monthly newsletter called the Grandgreen Tabloid that sought to engage residents and business owners in the area. It invited community members to write articles, send notices of community events, even to share history of the area. The focus was on business, but it also had a Community Calendar that posted such events as girls’ basketball at St. Mary’s of Redford and Park Players’ productions at the North Rosedale Park Community House. This was the earliest iteration of several neighborhoods in northwest Detroit working together to improve their community. This organization lasted only briefly though.

A couple of years later, residents and business owners were ready to try to form another organization to address the issue of vacancy and blight in northwest Detroit. The presidents of four neighborhood associations, Grandmont, Grandmont #1, Rosedale Park, and North Rosedale Park, were invited to take part in the formation of this new organization. The neighbors were and still are distinct, each with their own traditions and interests, and understandably, they did not want to sacrifice these aspects of their neighborhoods in order to be a part of an organization that represented “Grandmont Rosedale.”

WORKING TOGETHER TO IMPROVE THEIR NEIGHBORHOODS

In the late 1980s, the Michigan State Housing Development Authority (MSHDA) was offering flexible funding to address vacancy and blight, and so John and several other neighbors saw this as “a wonderful opportunity” to address the problem of blight, but in order to have the best chance to be able to take advantage of the opportunity, the neighborhoods needed to work together: “The chance to get grants to help us solve these issues was much greater if we all worked together.”

If the newly formed Grandmont Rosedale Development Corporation was going to work, it needed to have all four neighborhoods represented on its board. The early board members did in fact represent all four neighborhoods. Much like today’s GRDC board of directors, the original board members brought a valuable variety of strengths and perspectives. John remembers Reverend William Kight, the pastor at what used to be known as Calvin Presbyterian Church (now Macedonia Baptist Church), being a particularly valuable original board member as Reverend Kight had worked with a successful Community Development Corporation in Cleveland and so had some much needed first-hand experience: “From day one Reverend Kight brought legitimacy to the idea of a neighborhood development corporation.” According to John, Reverend Kight’s experience went a long way to allay the early skepticism some community members had about GRDC. Board member Mary Sue Schottenfels was a housing coordinator with Michigan Avenue of Community Organizations, and so knew a great deal about community organizing. Another early supporter Lee Hollenquest was, according to John, “a phenomenal organizer. He got block club leaders and some reluctant residents to have confidence in the new organization. And he had some pretty memorable parties. He had a great sound system. There was a lot of dancing.” All board members were active in their Grandmont Rosedale communities often serving on GRDC’s board and the board of their neighborhood associations simultaneously.

GRDC IS AWARDED ITS FIRST GRANT

All this effort paid off. GRDC was awarded a MSHDA grant that enabled GRDC to buy and rehab a vacant house on Abington. The renovation of this home set the community’s expectation that a GRDC renovated home was of high quality, as GRDC always works to adhere to the architectural quality of the homes in Grandmont Rosedale. That first GRDC-renovated home hasn’t been vacant since, and as of 2019, GRDC has bought, renovated, and sold more than 100 more homes in Grandmont Rosedale.

Over its 30 years, GRDC has had a hand in stabilizing Grandmont Rosedale by stabilizing the housing market. GRDC has GRDC has always looked to the community to direct its focus. GRDC has responded to the needs and aspirations of Grandmont Rosedale residents by organizing several initiatives. About 20 years ago GRDC added Minock Park to its list of represented neighborhoods, making it five neighborhoods that are Grandmont Rosedale. GRDC has several ongoing initiatives that address the important issues of safety, small business incubation, and access to fresh, local food, and the more recent focus on growing out community district. John sees this focus as an “outstanding and creative adjustment of priorities and funding to what the neighborhood needs.” GRDC also continues to address issues of vacancy and blight, and recently has begun to help adjacent neighborhoods combat vacancy and blight with high quality renovations.

John was Executive Director of GRDC for its earliest days. Longtime Grandmont Rosedale resident Tom Goddeeris served as Executive Director from 1990-2017, seeing GRDC through its new and exciting projects and initiatives, such as home repair loans, the creation of GRDC’s Community Security Program, several beautification projects, the renovation of the Stoepel Park baseball diamonds, the creation of the Northwest Detroit Farmers’ Market, and Detroit’s first neighborhood-based co-working and small business incubator space, the Grand River WorkPlace. GRDC moved from Mercy College to a rented office space at St. Timothy’s Church on Puritan, and then, finally, in 2008, to GRDC’s current home at 19800 Grand River. This green-renovated commercial space right at an entry point to Grandmont Rosedale has become a sort of community meeting place for Grandmont Rosedael residents, business owners, and people from the wider community who are looking for guidance, information, or even just a nice place to hold a meeting. GRDC’s current Executive Director, Sherita Smith, has had a career of service to community. She understands well the importance of neighborhoods working together, and reaching out to surrounding communities and initiatives. Currently GRDC shares the space with Detroit Metro WRAP Program which assists residents in paying utility bills. On many evenings you will see the front room of GRDC filled with residents who may be there for a block club meeting, a radio patrol meeting, a neighborhood association meeting, or even a luncheon for Grandmont Rosedale seniors.

Community is not always easy, and sometimes it’s downright difficult. The fact that GRDC was formed and led by residents who were committed to tackling the challenges of making their neighborhoods ever better places to live, work, and play 30 years ago, and the fact that during those 30 years GRDC has had to weather a sometimes challenging municipal and national economy, and the fact that GRDC has never lost sight of its mission to “Preserve and improve the Grandmont Rosedale neighborhoods of northwest Detroit”, is pretty impressive. For those who have lived or had a business in Grandmont Rosedale, GRDC has been a ready and effective advocate. For those who have volunteered at a GRDC event, donated to GRDC, or served on its board, GRDC has had a hand in shaping their lives, molding each neighborhood, each neighbor, into an example of the power of community.

GRDC has several events planned for its 30th anniversary year. There was a Summer Celebration on Friday, July 12 from 4 – 7 pm at the GRDC offices, 19800 Grand River. On Thursday, Oct. 17 from 7:30 – 9:30 am the Community Connections Breakfast: 30 Years of Impact and Innovation will be held at the North Rosedale Park Community House, 18445 Scarsdale. For tickets go to grandmontrosedale.com or call 313.387.4732, ext. 104. We are also collecting Grandmont Rosedale Stories, stories of neighborhood, community, and home. GRDC invites you to tell your Grandmont Rosedale story. Visit grandmontrosedale.com to learn more.