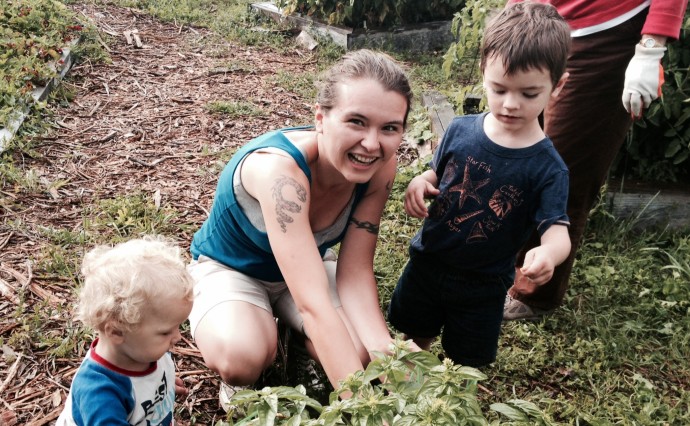 The system works:  Volunteers weed, rake, mow, help build a fence, pick, and then they “shop” for produce such as cucumbers, basil, squash, garlic, and strawberries before they head home.  Usually there are 6-12 people who help out Wednesday evenings from 6-8pm at GRDC’s Community Garden, and usually there isn’t much produce left over.  Some volunteers have preferences, of course.  Charlene Uresy of Grandmont looks for the garlic, lettuces, and was thrilled last year with the potatoes.  “I made French fries at home.  They were delicious!”  Errol Griffin of Rosedale Park likes to bring home onions, kale, and tomatoes and put them on sandwiches.  Dan McClellan of Rosedale Park also remembers the potatoes from last year.  He sautéed the potatoes with peppers and onions from the garden.  Kay Phillips, who has been helping at the garden for about three years really looks forward to beets:  “You can never have enough beets!”  Clearly there’s something for everyone at the Community Garden.

About five years ago Grandmont resident Richard Berlin mapped out what has since become GRDC’s Community Garden, a garden that offers a wide variety of fruits, vegetables, herbs and a bumper crop of community activism.  Located in the lot behind the parking lot of Bushnell Congregational Church, 15000 Southfield Freeway, the garden attracts not just local residents, but Master Gardeners Mary Mueller and Colleen McInerney from Malvern Hills join in the harvesting as well.  They come because they enjoy the community part of the community garden.  The youngest gardener, Rosedale Park resident Leandro Layton, age 2, also comes not just to dig in the dirt, but to dig in the dirt with other people like his friend North Rosedale Park resident Sean Kvoriak, age 3, who also likes digging in the dirt.  Landau’s mother, Clare Layton brings Landau even though they have a garden at home.  “We learn about growing things, and it’s just fun to garden with other people, with neighbors.” Many of the other gardeners who help out have home gardens as well.  They too come for the camaraderie, and, as Gary Miller of Rosedale Park attests:  “This is work, but you learn some things.  It’s fun too to just hang out with your neighbors.”

On a recent Wednesday evening, several community gardeners were not gardening.  Instead, they were working together to put up a fence around the garden to, as Pam Weinstein of Rosedale Park says, “let people know not to park here without being unfriendly.”  The garden sits on what used to be a lot used for overflow church parking.  The fence was purchased from the money the Community Garden won at the March SOUP event where they presented their idea complete with a skit involving shovels, gardening gloves and clippers.  A few years ago, about 70 Summer in the City kids painted a mural on a wall in the alley which added to the change in the use of the space.  The community around the garden has noticed the change, and responded.  There used to be a great deal of litter along the alleyway that separates the garden from the back of businesses along Grand River.  Now, according to Pam, “people care about this space, people respect it.  We still have to pick up some garbage before we start to garden, but it’s gone down a lot.”

If you’re a Master Gardener or someone who’s not clear which end of the shovel is used for digging, if you’re old enough to remember Victory Gardens or young enough to still be tempted to eat the dirt, you are welcome to come the Community Garden any Wednesday evening from 6-8pm from now until about early November.  You can simply show up at the garden, and/or email Pam Weinstein with questions at weintstein148@ameritech.net.  You might learn something new, you might pick up a good recipe from another gardener, you’ll probably bring home some fresh produce, and you’ll definitely be a vital part of another great community program in Grandmont Rosedale.