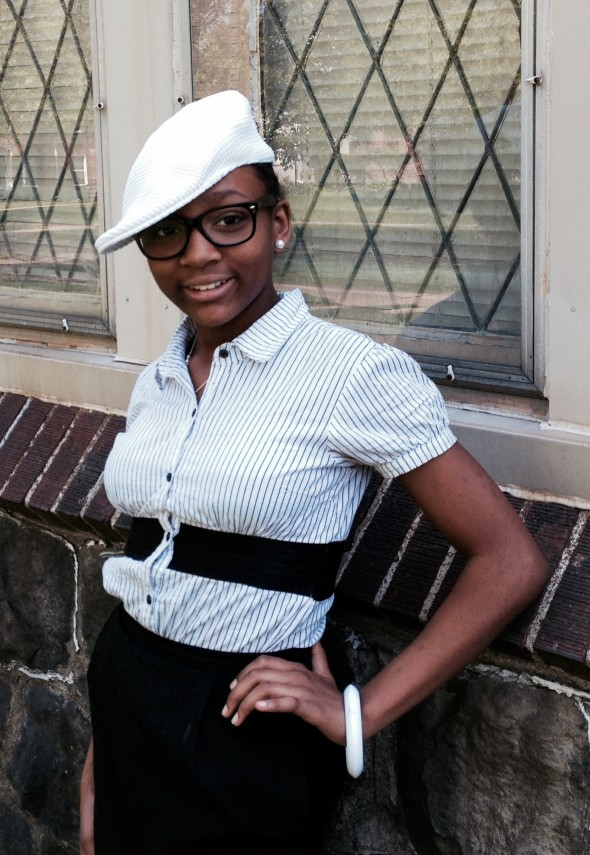 Outside of her neighborhood, Marcedes-Antoniya is the vice-president of the Society for Black Engineers, Junior Branch.  She got involved with SBE, Jr. because she wanted “to get girls into engineering.”  She had a bit of a rocky start with this group though.  She initially ran for president, but when no one stepped up for the secretary position, Marcedes-Antoniya agreed to be secretary, which, she admits, wasn’t easy for someone so ambitious:  “Sometimes I get a little crazy about leadership.”

Marcedes-Antoniya was also enrolled in the Young Entrepreneur Academy, an organization established through the Chamber of Commerce for 11-18 year olds who are interested in learning how to own and operate their own businesses.  Marcedes-Antoniya’s business idea has its roots in “personal need.  I got the idea when I was 11.  I came downstairs in the morning wearing my footie pajamas, and I was kind of hot.  I had an undershirt on underneath, so I pulled my arms out of the sleeves and then tied them around my waist.  Then I thought ‘I wish I could just zip off the top of my pajamas.’”  And then boom:  the idea for Marcedes-Anotniya’s original “Pazippees” design was born.  Marcedes-Antoniya’s presentation in front of the investor panel and fellow entrepreneurs assembled for the final day of the Young Entrepreneur Academy drew cheers and applause.  “Pazippees!  The Pajama with a Zip!” she exclaimed from the podium at the Arab-American Museum in Dearborn.  She hopes to have several made for the trade show on May 31.  Although she has a patent pending on her design, she has had some difficulties finding a seamstress to make the pajamas.  I wouldn’t worry though.  If anyone can get something done, Marcedes-Antoniya can.

Whether she becomes a full-time community activist or an engineer or a businesswoman or even a pediatric surgeon (which is also on her list), we can all say that we knew her when she was a 12 year old girl with a lot of spunk living in our neighborhood.