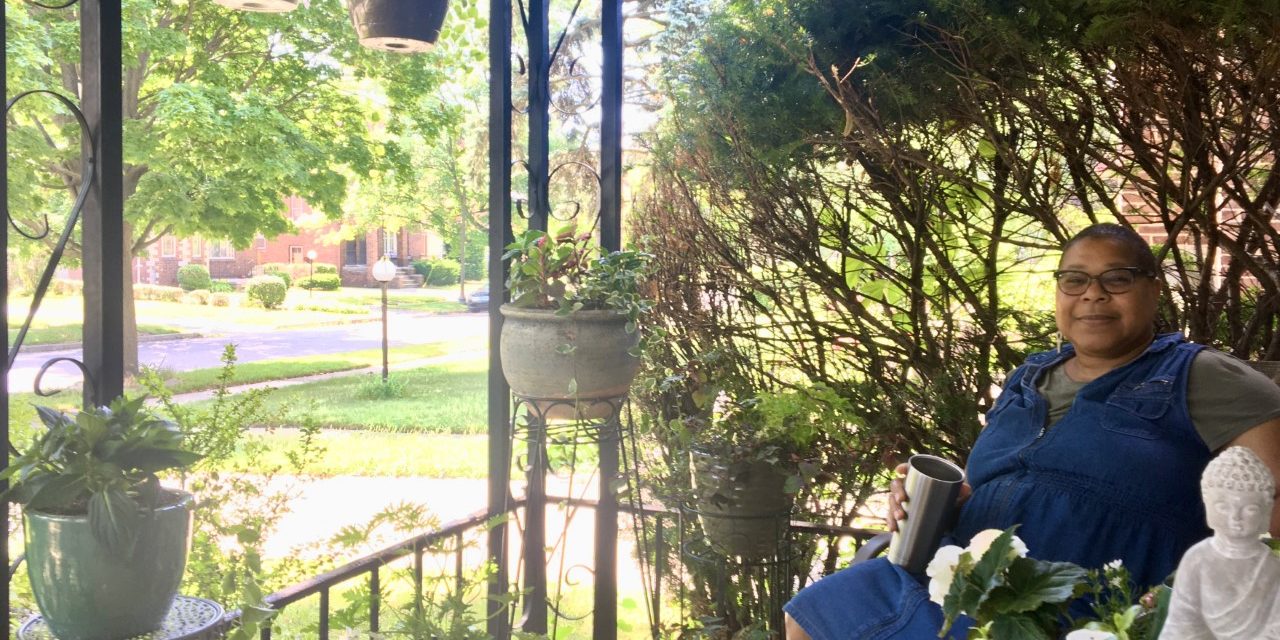 LaTonya Baldwin is the kind of person who takes the time to learn the name of the barista at her local coffee shop. She’ll also notice the regulars and learn their names too. Before long, she knows the name of the bus driver who drives the bus she takes to work, as well as how many kids he has and their ages. And she’ll remember to ask after them. She makes a point of meeting whoever lives next door, across the hall or down the street. Creating community wherever she goes is as natural and necessary to LaTonya as breathing.

When LaTonya moved to Grandmont Rosedale less than a year ago, she started to build community at about the same time as she was unpacking her boxes. Just as she had done where she used to live, LaTonya sought to participate in a local chapter of the Buy Nothing Project. There wasn’t one in Grandmont Rosedale, so naturally, LaTonya started one.

According to its website, the Buy Nothing Project is “a global network of community-based groups, founded in the United States in 2013, that encourages giving of consumer goods and services in preference to conventional commerce.” LaTonya, like many of us, had donated things she could no longer use to a number of places, but “that’s anonymous,” says LaTonya. “Anonymous donations are really missed opportunities.” The Buy Nothing Project is not so much about the giving and receiving of stuff; it’s about the community that is created when people who live near one another share what they have.

You can either “give” an item or service or “ask” for an item or service. It is up to the giver to decide who gets what’s offered. The asker does not need to demonstrate need. The only rule is that the exchange of money cannot happen. If someone is giving a service, it cannot be accompanied by a promotion – the give is as a neighbor, not as a business owner. If that give turns into more business for that plumber or painter, that’s the beauty of word of mouth, and it also has to happen outside of the Buy Nothing Grandmont Rosedale page. The idea is as old as it is simple: You realize you’ve run out of eggs while you’re in the middle of baking a cake. Instead of running to the store, you ask your neighbor. You get to know your neighbor a little bit better and a neighborhood bond is strengthened.

To join the Buy Nothing Grandmont Rosedale group, simply click on the Facebook link below. You’ll be asked a couple of questions, one of which is whether you live in Grandmont Rosedale. If a group gets to 1000, it splits because the administrative tasks become cumbersome and the focus on building community can get lost. LaTonya has added some other features such as a blog and she even has come up with some inventive and fun ways to offer that flower pot you don’t need or those gloves, that lamp, those art supplies: LaTonya recommends that givers post a photo of what is up for grabs. To make it a little fun, LaTonya’s “give,” might also ask something like “Where would you put this lamp?” or “What kind of food would you make to put on these plates?” If several people are interested in those plates, your creativity might just be the deciding factor. The Buy Nothing Project also has a green component. LaTonya admits that she “hates waste,” and one effective way to limit waste is to simply not buy as much.

LaTonya spent a lot of years working “in a grey cubicle.” The money was good, but she missed the opportunity for connection. Now, instead of working more and earning more, LaTonya is spending less and so can work less. The Buy Nothing Project helps make this possible. LaTonya is now a trained doula helping post-partum women fully recover from labor and delivery. “Families used to do that, but now so many families do not live near one another, women might not have anyone there to help them recover.” In a way, being a doula is similar to her involvement in the Buy Nothing Project. Both depend on maybe old-school notions of connection. Reconnecting to ways of building community, of creating support systems, has been a part of LaTonya’s life all her life, and Grandmont Rosedale is fortunate to have her as a neighbor. “It matters to me where I live. Home is important.”