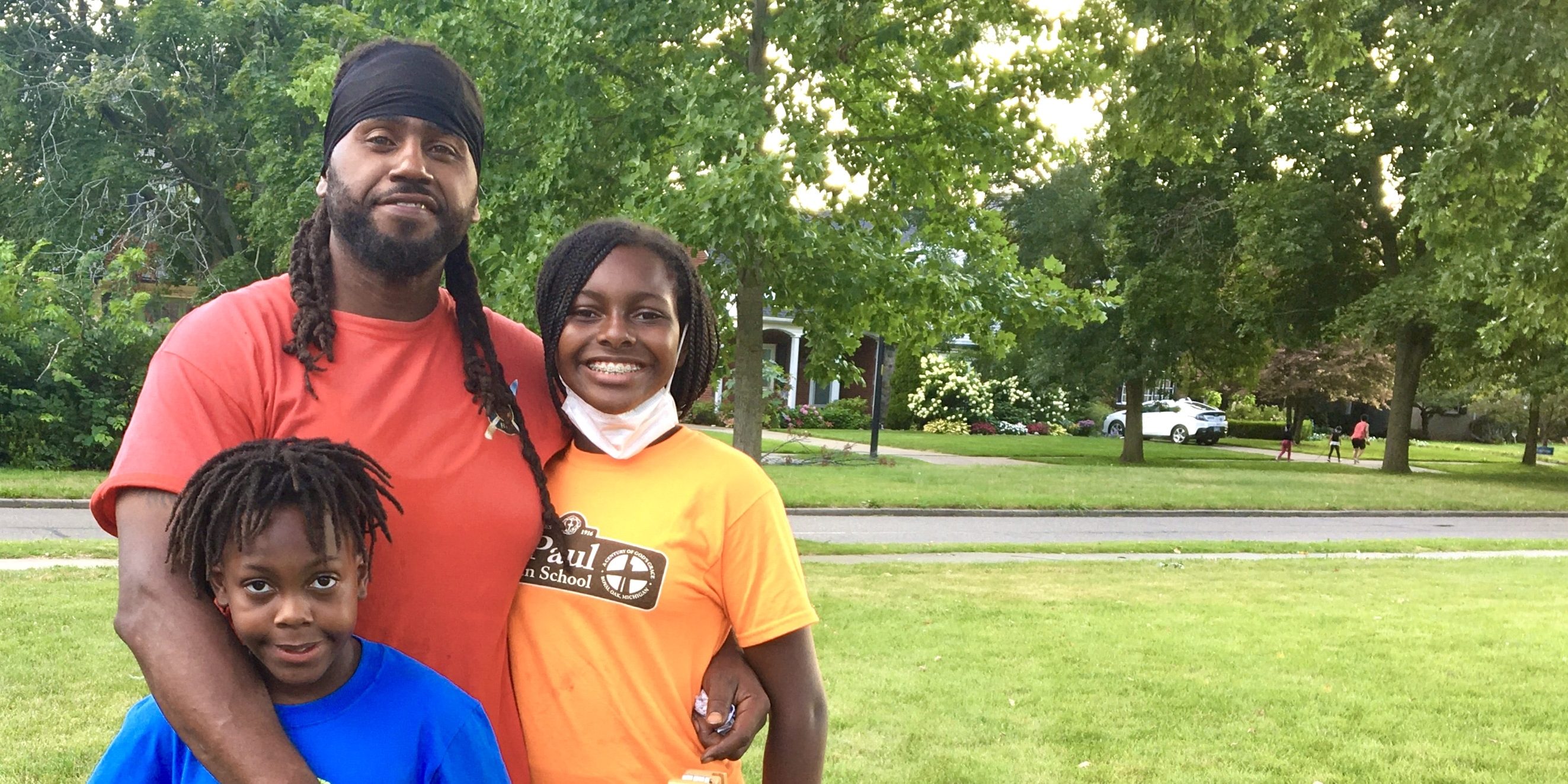 “Backdraft” is a “rapid or explosive burning of superheated gasses in a fire” – dangerous to firefighters and also a great name for a barbeque business that offers delicious, on the spot barbequed ribs, tips, chicken, lamb chops, and sauerbraten sausages. It’s also fitting that Backdraft BBQ is owned by Curtis Eason, a Highland Park firefighter. For the second year, Curtis has been grilling up lots of deliciousness at the Northwest Detroit Farmers’ Market. While several other vendors have some very faithful customers, the line for Curtis’ barbeque is long and patient. Everyone in that line knows that good barbeque takes time. It also takes a real wood fire and a thorough understanding of the importance of good sauce. Curtis learned quite a bit about sauce at culinary school, and his son Hilton makes sure the fire stays fed. If you visit Backdraft BBQ’s social media, you’ll see that Curtis’ daughter Balee has her own area of expertise that she brings to the business. A family business for a family-oriented neighborhood with an eye out for excellent barbeque is a wonderful pairing indeed.

Curtis credits his grandmother as his early culinary inspiration, but “the only one who barbeques in the family is me,” Curtis clarifies. Curtis has enjoyed cooking for as long as he can remember. Born and raised in Florida, Curtis first left home to play NFL football as a defensive lineman in San Francisco. He then played for an arena team in Detroit for 10 years, with one year in the XFL. 11 years ago, Curtis joined the Highland Park Fire Department. He has never stopped wanting to learn more about cooking though, and so enrolled in culinary school, “to see what I really know.” While he came in with a pretty good knowledge of cooking, Curtis “learned about the pairing of spices, how flavors complement one another, and that the whole baking thing is very different.” Curtis’ sauces reflect what he learned at culinary school, and as his business has picked up, his menu has expanded.

THE DRAW OF GREAT BBQ

Backdraft BBQ is a regular not just at our Farmers’ Market, but also at the corner of John R and State Fair, at the Plymouth Park and Eats (a food truck park), and in Royal Oak at Campbell and Hilton. Curtis has sold his barbeque at special events, corporate events, and will be happy to cater private events like birthday parties, anniversary parties – really anywhere there are hungry people who appreciate good barbeque. Curtis began his business by selling hot dogs in front of an auto store in Highland Park three years ago. That first year, Curtis’ daughter Balee helped him sell the hot dogs. The two of them did a brisk business and Curtis knew it was time to expand his menu. Curtis’ son Hilton stepped in to tend the fire that the new expanded menu demanded, Balee moved to marketing, and Curtis added ribs, chicken, lamb chops and more to the grill. Curtis does so well he often sells out as is evidenced in the photo. The team of three has become a Market favorite at the Northwest Detroit Farmers’ Market. Many Backdraft BBQ fans were very disappointed one week when a flat tire prevented Curtis from coming to the Market.

Backdraft BBQ has returned for the second year at the Northwest Detroit Farmers’ Market because, as Curtis says, “I enjoy it! There’s a familiarity here, with the shoppers and vendors. That’s really nice.” Balee and Hilton are pretty happy with their work too, and their boss. Hilton’s favorite part of his job is “is feeding the fire. I like loading the wood.” Keeping the fire going is a vital part of the process and a job that many a young lad would love. Hilton even gets paid for his work. Because Curtis is his dad as well as his boss, there’s a lesson in getting paid: “I give him half and I keep half. He’s saving up for a Playstation 5,” which will take the better part of the season to save. (What Hilton doesn’t know is that his dad said that “at the end of the summer I’m going to give him the other half.” Shh!)

Curtis’ plans for the future include getting a food truck and maybe one day having his own brick and mortar place. Sometime between now and the not too distant future, Curtis would love to “take a leave of absence and barbeque my way across the country to California. I’d stop long enough to cook and sell enough to keep going.” Leaving a trail of the delicious smell of real barbeque from Detroit to California is a wonderfully creative way to see the country. Lucky for us though, for now, Backdraft BBQ will at the Northwest Detroit Farmers’ Market on Thursdays from 4 – 8 pm at the North Rosedale Park Community House, 18445 Scarsdale.

If you’d like some great barbeque for your next event, contact Curtis at 586.741.9367 or backdraftbbq2017@gmail.com. You can see Balee’s great social media work at the Backdraft BBQ Facebook page: https://www.facebook.com/BackdraftBBQ/ and on Instagram: https://www.instagram.com/backdraftbbq17/ 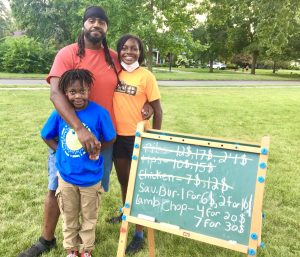 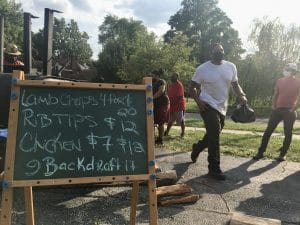